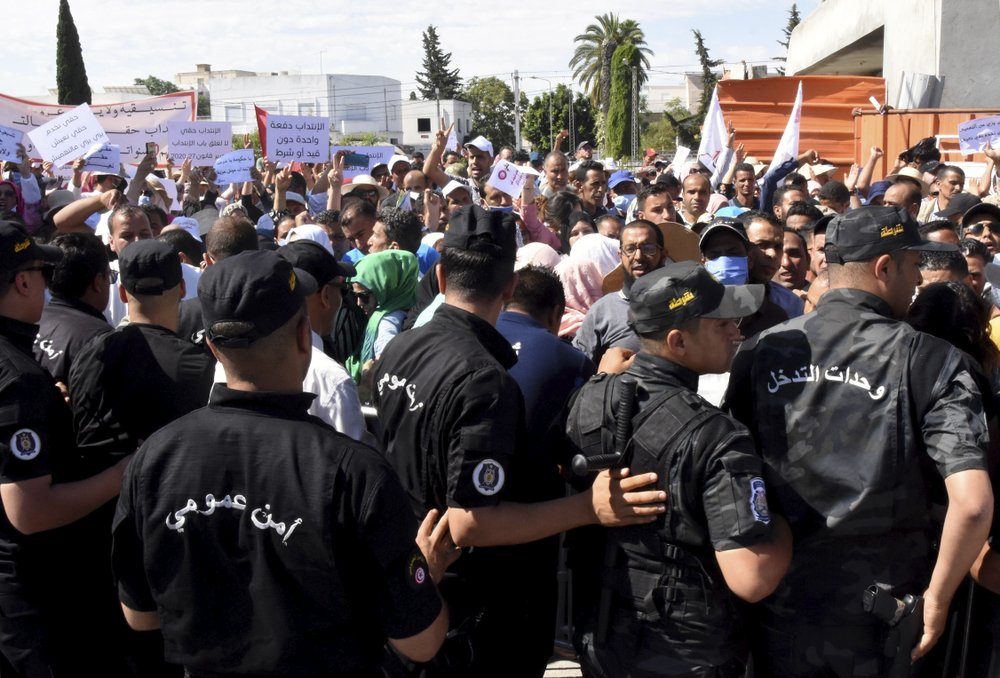 TUNIS, Tunisia (AP) — Hundreds of unemployed Tunisians from around the country tried to march on parliament Wednesday to demand a law guaranteeing jobs, and skirmished with police who blocked their way.

Virus confinement measures are worsening joblessness and poverty in Tunisia, where the economy had already been struggling for years. Unemployment was a key driver of protests that overthrew Tunisia’s autocratic president and unleashed the Arab Spring uprisings in 2011.

At Wednesday’s protest, demonstrators demanded “the right to work and to dignity.”

Gathered on the Bardo plaza outside parliament, they chanted: “Unemployed people, rise up, work is a right guaranteed by the constitution!”

Some tried to push past police barriers, prompting skirmishes with police. Several protesters were arrested but quickly released after the crowd accused police of harassment, activist Hassib Laabidi said.

The demonstration was organized by the Union of Unemployed Graduates, and brought in protesters to the capital from various parts of the country — especially impoverished towns in central and southern Tunisia.

Demonstrators demanded the adoption of a law that would guarantee jobs for anyone with a diploma who has been unemployed for more than 10 years. Such chronic unemployment is widespread in Tunisia.

Lawmakers discussed an initiative for such a law in March, but it hasn’t made any progress since, Labidi said.

“Many of us are age 40 and over and have been unemployed for eight to 10 years,” said protester Hanene Abdallah, from the Mediterranean city of Sousse. “We want to work because we have family responsibilities and basic needs that we are unable to meet.”

Mariem Gabsi, a German teacher from Gabès in southern Tunisia, described struggling to find more than a couple of hours of work per week, at less than two US dollars an hour.

Tunisia’s prime minister announced Sunday a freeze in public service hiring, citing the difficult economic situation aggravated by the virus pandemic and lockdowns that have paralyzed the economy — especially tourism and industry, key sectors for Tunisia.

A study carried out jointly by the Tunisian government and the UN Development Program forecasts the unemployment rate in Tunisia to increase to 21.6 percent by the end of this year from 15 percent currently, and the poverty rate is forecast to rise to 19.2 percent.

Image: Tunisian Graduates unemployed protest in Tunis after Tunisian Prime Minister Elyes Fakhfakh announced that public service recruitments will be stopped and the possibility of reduce wages for public service employees, Wednesday June 17, 2020. About 500 unemployed people demonstrated in Bardo square in front of the House of Representatives, which closed a few days ago, the protesters demanding jobs, freedom and dignity. Some of the protesters tried to bypass the security barrier and there was a stampede with the security agents. (AP Photo/Hassene Dridi)

Post-lockdown recovery up in flames for Tunisia market vendors