JERUSALEM, Feb 7 (Reuters) – Israel’s top police officer and at least three cabinet ministers called for an independent inquiry on Monday after a newspaper said police had illicitly used spyware against confidants of ex-Prime Minister Benjamin Netanyahu and other public figures.

Pegasus, a cellphone hacking tool made by Israel’s NSO Group, was used to “phish for intelligence even before any investigation had been opened against the targets, and without judicial warrants”, the Calcalist daily said in the unsourced report.

Those targets included a son of and two aides to Netanyahu, who is on trial on corruption charges, as well as a co-defendant and several witnesses, and, separately, two former officials suspected of leaking information to journalists, Calcalist said.

Lawyers for Netanyahu – who denies wrongdoing – urged that the proceedings against him be suspended pending clarification of the Calcalist report. Police Commissioner Kobi Shabtai asked the government to order an external commission of inquiry.

This was required “in order to restore the public’s trust in the Israeli police”, he said in a statement, adding that the incidents cited by Calcalist predated his appointment in 2021.

Police have been conducting internal investigations, and answering questions before parliamentary oversight panels, since Calcalist last month reported that its investigators had used Pegasus against Israeli citizens – sometimes without warrants.

That report created domestic furore over the Pegasus spyware, whose alleged misuse by foreign clients had prompted the government of Naftali Bennett to order export reviews.

NSO says all its sales are government-authorized and that it does not itself run Pegasus.

Bennett had no immediate comment on the affair on Monday.

But Interior Minister Ayelet Shaked, a member of his rightist party, called the latest Calcalist findings “an earthquake, if true – the gravest of acts by Israeli police, befitting dark regimes and definitely not a democratic country”.

“An external commission of inquiry should be set up,” she told Kan radio. That call was echoed by centrist Immigration Minister Pnina Tamano-Shata and liberal Environment Minister Tamar Zandberg, the latter of whom urged on Twitter: “Commission of inquiry, no excuses or semantics.”

President Isaac Herzog also voiced concern. “We must not lose our democracy,” he said in a speech. “This necessitates a very deep and thorough investigation.” Eighty percent of Egyptian students in Ukraine have left the country: minister 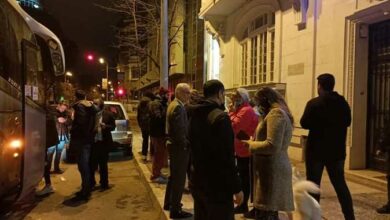 Egypt’s ambassador to Romania: 160 Egyptians from Ukraine left on an Egyptian evacuation plane