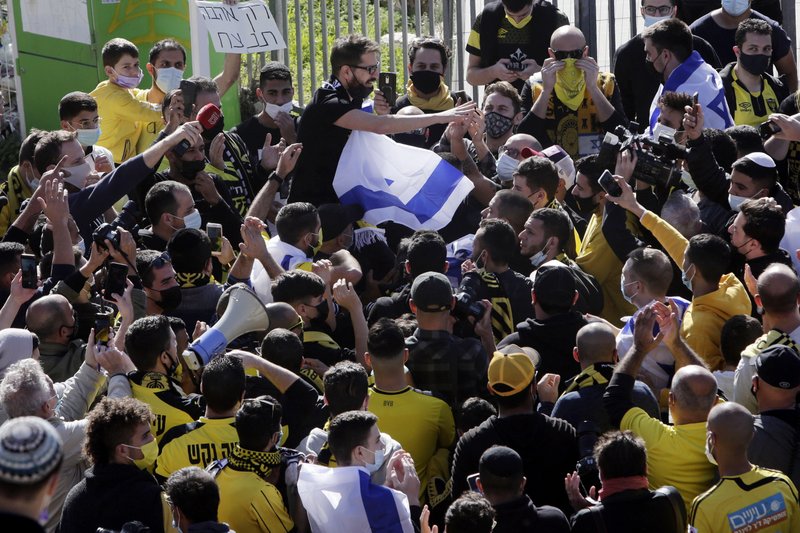 JERUSALEM (AP) — Fans of an Israeli soccer club long associated with anti-Arab racism gathered on Friday in a show of support for an Emirati businessman’s purchase of a stake in the organization, welcoming it as a sign of change even as a smaller number of fans protested the move.

Beitar Jerusalem is the only major Israeli soccer club to have never had an Arab player, and its hardcore fans have a history of racist chants at matches. Arabs make up 20% of Israel’s population, and Arab players star on rival teams and the country’s national squad.

More than 100 fans gathered to show their support for the new owner, while a few dozen hardcore fans — known as La Familia — protested it. Israeli police said four people were arrested for “confrontations,” without elaborating.

Sheikh Hamad bin Khalifa Al Nahyan, a member of the ruling family in Abu Dhabi, recently bought a 50% stake in the club and pledged to pump $90 million into the team in the coming decade. The United Arab Emirates, home to Abu Dhabi and Dubai, normalized ties with Israel earlier this year.

The sheikh and his Israeli partner, Moshe Hogeg, have vowed to transform the team into a model of coexistence and say they are open to adding Arab players to its roster. That would make it the last team in Israel to integrate its lineup.

Netanel Avraham, one of the fans who gathered to support the move, said he was happy to welcome the new owner. “We hope he’ll take us to good places,” he said.

“I want it to be known that Beitar Jerusalem is not a racist team,” he added. “I want this stigma to be taken out.”

Beitar, loosely linked to Prime Minister Benjamin Netanyahu’s Likud party, is one of the country’s most storied franchises, winning 13 trophies and counting Israeli presidents and prime ministers among its fans. But it also has drawn negative attention for never having an Arab player.

Club officials have in the past said their hands were tied by a hardcore base of fans who wield significant clout over personnel decisions. A small group of fans, known as La Familia, have been known to whoop like monkeys when an opposing team’s player from Africa touches the ball and chant “death to Arabs” toward opposing Arab players.

Both Hogeg and Al Nahyan have said that such behavior will not be tolerated.

Hogeg, an Israeli high-tech and cryptocurrency investor, said he has already taken steps against racism since he acquired Beitar two years ago. The team says it has Arab players on its women’s and youth teams.

By SHLOMO MOR and MAYA ALLERUZZO

Image: Moshe Hogeg, one of the owners of Beitar Jerusalem FC soccer is surrounded by supporters during a team training session in Jerusalem, Friday, Dec. 11, 2020. Fans of the soccer club long associated with anti-Arab racism gathered Friday in a show of support for an Emirati businessman’s purchase of a stake in the organization, welcoming it as a sign of change even as a smaller number of fans protested the move. (AP Photo/Mahmoud Illean)