Israeli naval forces late morning on Tuesday forcefully took over the French vessel Dignite al-Karama en route to Gaza to break Israel's blockade on the coastal strip. The soldiers commandeered the ship with little resistance, according to the Jerusalem Post, after the ship's crew of 16 activists refused to steer away from Israel's naval blockade.

With 16 people from several countries on board, the French vessel  may have been Freedom Flotilla II’s last hope of breaking Israel’s four-year blockade of Gaza this year. Passengers on the ship were expected to arrive in Gaza on Tuesday at noon.

Nine other ships part of this year’s Freedom Flotilla II were prevented from sailing to Gaza from Greece. Organizers and activists on those vessels faced legal and administrative hurdles, as well as reported acts of sabotage.

According to Freedom Flotilla II’s website, Dignite al-Karama was able to elude Greek authorities and sail from the Greek island of Kastellorizo this past Saturday night.

Getting past Israeli authorities, however, proved a greater challenge to those on board the ship.

In May, a Malaysian ship attempting to break Israel’s blockade of Gaza faced warning shots from Israeli authorities as it neared Gaza. The vessel ultimately retreated into Egyptian waters.

Omeyya Seddik, a Tunisian writer and activist on board Dignite al-Karama, had told Al-Masry Al-Youm that those on board the vessel believe that they have a legal right to reach Gaza.

“We believe that we have the right to get to Gaza, and that Israel has no right to stop us.  We’re doing nothing illegal. We’ll continue,” he said.

Asked if the vessel’s trajectory had been influenced by Al-Masry Al-Youm’s 5 July editorial calling on the Egyptian government to allow Freedom Flotilla II’s vessels to use Egyptian ports, Seddik responded that Dignite al-Karama is near, but not in Egyptian waters. Ultimately, the boat docked in international waters off Egypt's Port Said to spend the night before heading toward Gaza at 6am.

Seddik, who opposed Ben Ali during Tunisia’s revolution that led to his ouster, said that his group did not want to complicate matters for the Egyptian state.

But reiterating a message posted on the website of the voyage’s French organizers, Seddik expressed solidarity with the Egyptian people. He said, “We salute the Egyptian people, and tell them that we hope to meet them after our return from Gaza.”

Unlike previous flotillas to Gaza, the voyage was strictly political, according to Seddik.  Dignite al-Karama was not carrying any humanitarian goods.

The vessel's French organizers posted on Twitter that Dignite al-Karam and its passengers, "allegedly not harmed," were redirected to the Israeli port of Ashdod. 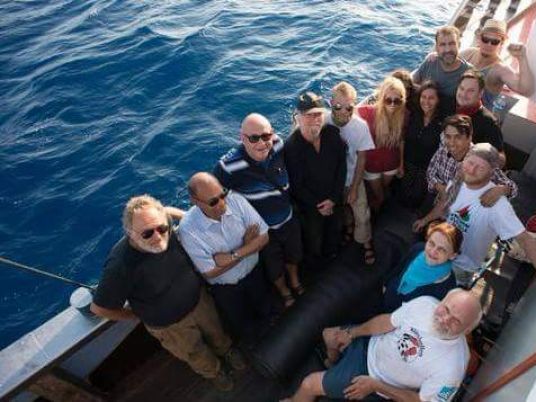