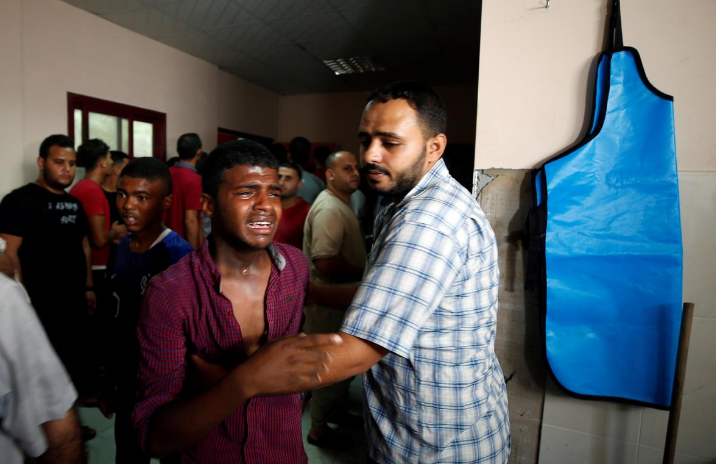 GAZA (Reuters) – Israeli tank fire killed two Hamas militants in Gaza on Tuesday in a strike the Israeli military said was launched against a position from which its troops had come under fire.

Hamas and Palestinian health officials in Gaza confirmed the deaths near Beit Lahiya in northern Gaza, shortly before noon.

A statement by the Israeli military said: “A short while ago, terrorists fired shots towards IDF (Israel Defence Forces) soldiers near the northern Gaza Strip from a Hamas post. In response, an IDF tank targeted the post from which the shots were fired.”

The military released footage that it said was of the incident. One of the grainy black and white video clips shows two men in a watchtower, one appears to open fire as puffs of smoke burst in front of him. The video then cuts to separate footage of a shell hitting the post and an explosion. Reuters was immediately unable to verify the footage.

In Gaza, Hamas’s military wing, the Qassam Brigades, issued a statement saying that it “mourns the two Mujahedeen” and that they had been “martyred in a Zionist bombardment.”

U.N. and Egyptian-led efforts are under way to mediate a long-term truce between Israel and Hamas that would end a four-month upsurge of violence along the Israel-Gaza border.

At least 158 Palestinians have been killed in four months of weekly border protests and one Israeli soldier was shot dead by a Gaza sniper.

Israel says Hamas, which rules Gaza, is using the protests as cover to carry out cross-border attacks. Hamas denies this.

Palestinians militants have also fired rockets into Israel and the Israeli military has carried out dozens of air strikes in the enclave.

Israel has lost tracts of farmland and forest to fires started by kites and helium balloons laden with incendiary material which have caused fires in Israeli forests and farmlands and flown over the border by Palestinians in Gaza.

Israel signals any truce with Hamas to be limited in scope