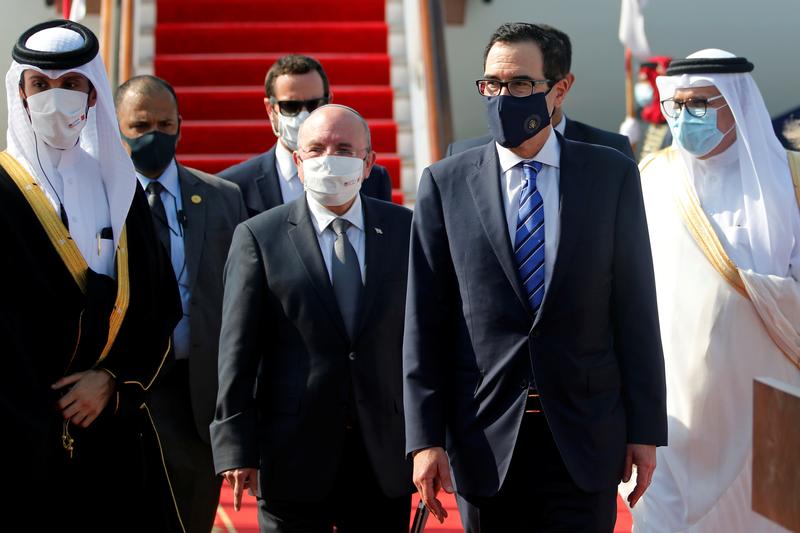 MANAMA (Reuters) – An Israeli delegation accompanied by the US treasury secretary arrived in Bahrain on Sunday to formalise nascent relations and broaden Gulf cooperation that Washington has promoted as an anti-Iran bulwark and potential economic bonanza.

Bahrain followed the United Arab Emirates in agreeing last month to normalise ties with Israel, stunning Palestinians who had demanded statehood before any such regional rapprochement.

The breakthrough, overseen by US President Donald Trump, is a foreign policy flourish ahead of his re-election bid next month. For the US allies, it is a chance to close ranks on Iran more overtly.

The Israeli delegation, which flew on an El Al Israel Airlines charter flight from Ben Gurion airport in Tel Aviv, was accompanied by US Treasury Secretary Steve Mnuchin.

Israeli Prime Minister Benjamin Netanyahu, in public remarks to his cabinet, said the delegations would work on cooperation agreements and “establishing the peace treaty”.

Israel and Bahrain signed a “Declaration of Peace, Cooperation, and Constructive Diplomatic and Friendly Relations” at a White House ceremony on Sept. 15, a document that fell short of a formal treaty.

At a ceremony with Mnuchin before take-off, US Middle East envoy Avi Berkowitz said that Israel and Bahrain would sign a joint communique “bringing forward tourism and banking and diplomatic relations”.

“I think the opportunity is way beyond just investments,” Mnuchin told reporters on the El Al flight. “It’s in technology, building various different businesses – and in the case of Bahrain as well, really expanding the opportunities for them quite, quite, quite dramatically.”

The Trump administration has been trying to secure more such deals for Israel ahead of the US election and Mnuchin said he hoped the process would continue regardless of who wins at the polls.

Israeli National Security Adviser Meir Ben-Shabbat, speaking in Arabic at an arrival ceremony at Manama airport, said: “This is a great day … We look forward, Inshallah (God willing), to hosting you in Israel soon.”

Bahraini Foreign Minister Abdullatif Al-Zayani described the engagement and cooperation as “the most effective, the most sustainable means to bring about a genuine and lasting peace, one which safeguards the rights of the Middle East peoples.”

The signing of the declaration, however, drew anger among Bahrainis at home and abroad. Bahrain, where a Sunni Muslim minority rules a Shia majority population, has said the deal protects its interests from Iran.

El Al Flight 973, a nod to Bahrain’s telephone code, flew over Saudi Arabia, an accommodation by the Gulf powerhouse that has so far resisted US appeals to normalise ties with Israel.

Mnuchin and the other US officials travel on Monday to the UAE, where the accord with Israel has uncorked bilateral commerce. On Tuesday the US dignitaries will join the UAE’s first delegation to Israel.

Though less oil-rich than the UAE, Bahrain – host to the US Navy’s Fifth Fleet – has geo-strategic significance.

A Sept. 13 report by Israel’s Intelligence Ministry saw potential for defence cooperation with Bahrain, describing it as threatened by “Shiite political sedition, directed by Iran and its proxies”.

A Bahraini source said a priority for Manama would be cybersecurity cooperation, after a decree issued by the king last week to set up a National Cybersecurity Centre, and tapping Israel’s ecosystem for business startups.

Israel is winning on the world stage, but losing the plot at home