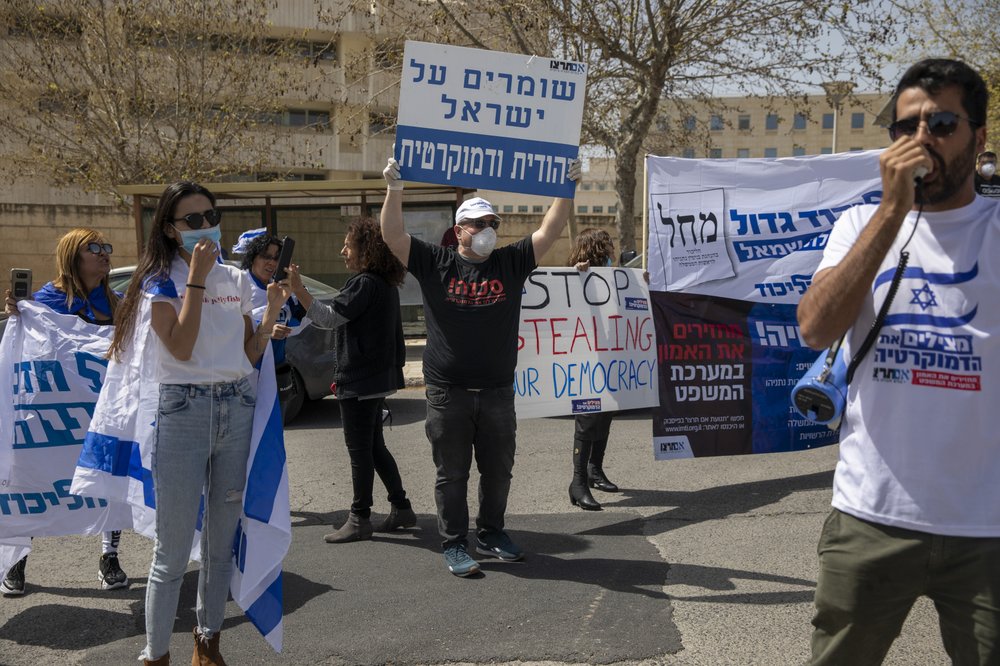 JERUSALEM (AP) — Israel’s parliament speaker resigned Wednesday after seven years on the job rather than comply with a Supreme Court order to convene a vote on his replacement, dealing a blow to Prime Minister Benjamin Netanyahu as he tries to remain in power amid an outbreak of the coronavirus.

Yuli Edelstein had suspended parliamentary activities last week, citing procedural issues and restrictions on large gatherings due to the spread of the coronavirus. But opponents accused him of blocking a vote after his right-wing bloc failed to win a majority in March 2 elections in order to shield Netanyahu from legislation that would limit his lengthy rule.

Edelstein dismissed a Supreme Court call to explain his delay in convening the Israeli Knesset, or parliament, and that sparked an unprecedented judicial rebuttal, with the Supreme Court chief justice ordering him to hold a vote and accsuing him of “undermining the foundations of teh democratic process.” With other top members of Netanyahu’s Likud party urging him to defy the order, he responded that he would “not agree to an ultimatum” and resigned instead.

He said he would step down so as not to allow Israel to “descend into anarchy” and devolve into civil war. But in his last act he also said parliament would only reconvene next week, in apparent subversion of the Supreme Court order that a vote be held by Wednesday. The move may put him in contempt of the court and opposition figures indicated they would file another petition against him to force his hand.

“This is a black day for democracy,” said Eliad Shraga, the chairman of the non-profit Movement for Quality Government in Israel.

The showdown marked the height of an ever-deepening standoff between Netanyahu’s opponents and supporters in the wake of the country’s third inconclusive election in less than a year and against the backdrop of a series of emergency executive measures the caretaker government has enacted to quell the spread of the new virus.

Netanyahu’s Likud emerged as the largest party in the election earlier this month, but along with his smaller religious and nationalist allies, won only the support of 58 lawmakers — leaving his right-wing bloc three seats short of the required majority in parliament. Opposition leader Benny Gantz is backed by a slim majority in the newly elected Knesset and has been pushing for the country’s legislature to continue functioning at such a critical time, even without a permanent government in place.

His majority bloc is deeply divided along ideological lines and unlikely to band together to form an alternative government. But they are determined to oppose the criminally indicted Netanyahu and seem willing to cooperate in parliament, accusing Edelstein of shuttering the halls of the legislature in order to keep his job and shield his beleaguered party leader.

They bloc is expected to win a vote to nominate Meir Cohen of Gantz’s centrist Blue and White party as Edelstein’s replacement. They convened several decision-making committees to oversee government activity, including one devoted to the corona crisis, and are expected to push through legislation that could prevent Netanyahu from serving as prime minister in the future.

Edelstein’s resignation marked the first time in Israeli history that a Knesset speaker had stepped down.

Netanyahu has called on Gantz to join him in an emergency government devoted to handling the coronavirus crisis together and to avoid the continued political deadlock that would likely force yet another election — one that likely won’t even be possible to carry out given the current state of lock down and contagion. But with Edelstein’s resignation, the option of unity appeared off the table.

The country have been nearly entirely shut down, with tens of thousands put out of work and all but essential movement from the home barred.

New restrictions approved Wednesday limit all those besides personnel deemed essential from venturing more that 100 meters (yards) from their homes, and all places of worship shuttered. In a recent surge, more than 2,000 Israelis have been infected, with 37 in serious condition. Five elderly Israelis with pre-existing medical conditions have died.

Gantz has pledged to support the government in its effort to combat the virus. But he and his allies have been skeptical about Netanyahu’s power-sharing overtures, concerned that he will not follow through on his promises to cede power in 18 months.

The party accuses Netanyahu and his caretaker government of carrying out undemocratic measures amid the crisis, and using it as cover to cling to power.

Netanyahu has already managed to postpone his own pending criminal trial on serious corruption charges and authorize unprecedented electronic surveillance of Israeli citizens.

Even amid the health scare, Israelis have taken to the streets and waved black flags to protest what they consider an assault on Israeli democracy. Netanyahu supporters have held small counter rallies as well.