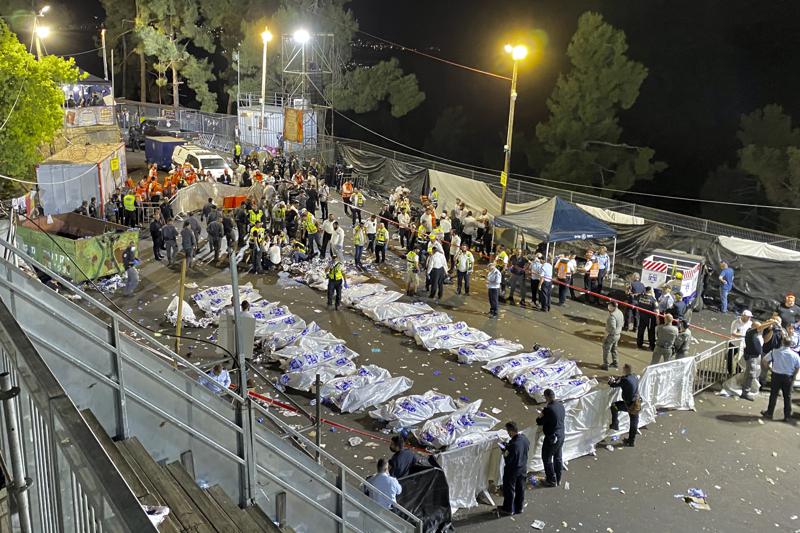 JERUSALEM (AP) — The holiday of Lag BaOmer is one of the happiest days on the calendar for Israel’s ultra-Orthodox community — a time of mass celebrations in honor of a revered sage. But in a split second Friday, the festive gathering in northern Israel turned into one of the country’s worst-ever tragedies, with at least 45 people crushed to death and dozens injured in a stampede.

The disaster prompted a national outpouring of grief as devastated families rushed to identify their dead relatives and bury them ahead of the Jewish Sabbath. There was also anger toward authorities over an accident that experts had long feared, further clouding Prime Minister Benjamin Netanyahu’s hopes of remaining in office.

Netanyahu, who briefly visited Mount Meron at midday, offered his condolences. “In these moments our people unite and that is what we are doing at this moment as well,” he said.

He announced Sunday would be a day of national mourning and said he had joined the masses of people who donated blood for the victims. Israel’s President Reuven Rivlin lit 45 candles in honor of the dead. Messages of condolences poured in from around the world.

President Joe Biden said he was heartbroken and had called Netanyahu to offer support. “The people of the United States and Israel are bound together by our families, our faiths, and our histories, and we will stand with our friends,” he said.

The stampede erupted around 1 a.m. as people began to leave and thronged a narrow, tunnel-like passage. According to witnesses, people began to fall on a slippery ramp, causing others to trip and sparking panic.

Avigdor Hayut, who survived the stampede, described slipping on the ramp and getting trapped in the crowd with his two sons, ages 10 and 13.

“My son screamed, ‘I’m dying,’” he told Israel’s public TV station Kan. A policeman tried to pull him and his younger son out of the crowd but couldn’t move them.

“The policeman threw up and started crying, and I understood what he was looking at, what I couldn’t see,” said Hayut, 36, who suffered a broken ankle and ribs. “I thought this was the end.” He said he began to pray and “simply waited.”

Hours later, in hospital with Shmuel, his 10-year-old, they learned that his other son, Yedidya, had died.

Lag BaOmer is very popular with Israel’s ultra-Orthodox community. The main event takes place each year at Mount Meron. Tens of thousands, mostly ultra-Orthodox, celebrate to honor Rabbi Shimon Bar Yochai, a 2nd-century sage and mystic who is believed to be buried there. This year, authorities said some 100,000 people attended.

The crowds light bonfires, dance and have large festive meals as part of the celebrations. Across the country, even in secular areas, smaller groups gather in parks and forests for barbecues and bonfires.

Video footage from the scene of the disaster showed large numbers of people, most of them black-clad ultra-Orthodox men, squeezed in the tunnel. Witnesses complained that police barricades had prevented people from exiting properly.

“The officers who were there couldn’t care less,” said Velvel Brevda, a rabbi who witnessed the stampede. He blamed the government for the deaths of “beautiful holy Jews that were killed here for no reason whatsoever.”

At least 45 people were killed, according to the Israeli Health Ministry, with four people remaining in critical condition and dozens more hospitalized.

Bodies were later taken to Israel’s central forensic institute for identification, where distraught families waited to identify their loved ones. Israel’s Army Radio said some 40 people remained unaccounted for.

By Friday night, 32 victims had been identified. Israeli media earlier published a partial list of the victims, including a 9-year-old boy, a pair of brothers, 12 and 14, and a father of 11 children. An unknown number of American citizens, two Canadians and an Argentinian were also among the dead.

In a race against time, a number of funerals were held before sundown Friday, the start of the Jewish Sabbath when burials do not take place. The death toll at Mount Meron exceeded the 44 people killed in a 2010 forest fire, previously believed to be Israel’s deadliest civilian tragedy.

The Justice Ministry said the police were launching a probe into possible criminal misconduct by officers.

Experts have long warned that the Mount Meron celebrations were ripe for disaster due to the crowded conditions, large fires and hot weather. In a 2008 report, the state comptroller, a watchdog government office, warned conditions at the site, including escape routes, “endanger the public.”

Last year, the celebrations were greatly scaled back due to coronavirus restrictions. But this year’s event marked the first religious gathering to be held legally since Israel lifted most restrictions in the wake of its successful vaccination program.

According to Health Ministry guidelines, public gatherings continue to be limited to no more than 500 people. But Israeli media said that Netanyahu assured ultra-Orthodox leaders that the celebrations would take place, despite objections from public health officials. Netanyahu’s office did not respond to requests for comment.

The deadly stampede was bound to have political reverberations at a time of great uncertainty following an inconclusive March election, the fourth in two years.

Netanyahu has so far been unsuccessful in forming a governing coalition. His time to do so runs out on Tuesday. If he fails, his political rivals will get a chance to try to cobble together an alliance.

Netanyahu has long relied on powerful ultra-Orthodox parties as allies and will need their support if he wants to keep faint hopes alive of staying in power.

During Friday’s visit to Mount Meron, Netanyahu was jeered by dozens of religious protesters. If such sentiments spread, it could further hurt Netanyahu’s prospects.

The stampede also threatened to deepen a broad public backlash against the ultra-Orthodox.

Gideon Rahat, a political scientist at the Hebrew University and fellow at the Israel Democracy Institute, said the coming days would see a battle over “framing” of the event. Netanyahu will call for national healing and unity, while his opponents will say he is unfit to remain in office and its time for change.

“There is a battle on the framing, who is to blame, not to blame,” he said. “Already we see the signs of it.”

By JOSEF FEDERMAN and ISAAC SCHARF

Image: Israeli security officials and rescuers stand around the bodies of victims who died during a Lag Ba’Omer celebrations at Mt. Meron in northern Israel, Friday, April 30, 2021. The director of an Israeli ambulance service has confirmed that nearly 40 people died in a stampede at a religious festival in northern Israel. (Ishay Jerusalemite/Behadrei Haredim via AP)