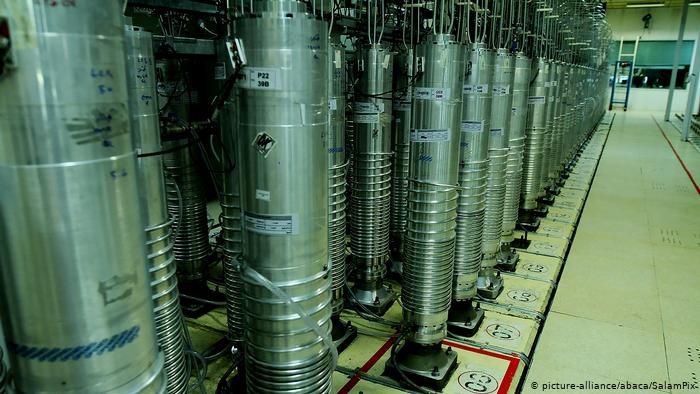 Iran is currently facing two crises. Sanctions have cut the country off from global markets, which has brought the economy to its knees. Iran is also dealing with an acute public health catastrophe as the coronavirus epidemic in the country continues to spread.

Some experts predict that COVID-19 has the potential to kill as many as 3.5 million people in Iran.

Despite these extreme circumstances, Tehran is continuing to push ahead on its nuclear program.

The Atomic Energy Organization of Iran (AEOI) recently announced that it is developing more advanced centrifuges used to enrich uranium far beyond the level allowed under the 2015 nuclear deal, the so-called Joint Comprehensive Plan of Action (JCPOA).

In May 2018, the United States backed out of the agreement and reinstated economic sanctions against Iran and its trading partners. In response, Iran said it would no longer adhere to the limitations on nuclear development in the deal, putting pressure on the other signatories by ramping up nuclear development.

Washington’s sanctions have hampered Tehran’s ability to import necessary goods, including medical devices. Banks are unwilling to finance any trade-related transactions with Iran over fear of US-imposed fines.

To set up a backdoor financing mechanism allowing European firms to do business with Iran, and dodge US sanctions, France, Germany and the UK established INSTEX, or Instrument in Support of Trade Exchanges. On Tuesday, INSTEX was implemented for the first time to facilitate the export of medical devices to Iran from Europe. As foreign aid arrives to help Iranians suffering from COVID-19, there are indications that the Islamic Republic has started using the coronavirus crisis as a means to justify its development of nuclear fuel.

Ali Akbar Salehi, the head of the AEOI, said the agency is using gamma rays to disinfect masks, gloves and other medical equipment, and those gamma rays can only be produced in nuclear reactors.

However, former International Atomic Energy Agency (IAEA) advisor and Iranian physicist Behrooz Bayat, said that disinfecting medical devices is not a valid reason for Iran to carry on with the nuclear program.

“While it is true that gamma radiation can be used to sterilize medical masks and gloves, the extent to which their use is effective in directly combating COVID-19 is questionable,” said Bayat.

“Salehi’s strategy is to cast the regime’s nuclear program in a favorable light,” he added.

At the same time, Salehi knows that the Iranian public’s interest in the nuclear program is dwindling. Tehran continues to insist it is only interested in the civilian application of nuclear technology.

“In principle, faster centrifuges do not contradict civilian use, but they do violate the international nuclear agreement,” said Bayat. The JCPOA promised sanctions relief in exchange for Iran capping its uranium enrichment at a lower level and allowing for international inspections to verify it is not pursuing nuclear weapons.

Signed in 2015 by Germany and the five permanent powers in the UN Security Council, the deal was intended to ensure that Iran would not be able to develop nuclear weapons in the foreseeable future. In return, easing sanctions would pave the way for Iran’s return to the global economy.

One year after the US unilaterally terminated the agreement in 2018, and reinstated economic sanctions against Iran and its trading partners, Tehran announced that it would partially withdraw from the agreement. In the absence of economic benefits promised in 2015, Tehran’s strategy is to apply pressure on other signatories.

“The Iranian nuclear program was designed as a deterrent. The regime now lacks the means to counter the US’ breach of treaty obligations,” said Bayat. According to the physicist, the acceleration of the program through the modernization of centrifuge facilities could also be understood as a “covert threat to pursue development of an atom bomb.” According to the IAEA, Iran has boosted its stock of enriched uranium

According to the latest International Atomic Energy Commission (IAEA) report, the country has already tripled its total stock of low-enriched uranium, a precursor to highly enriched uranium, from 372.3 kilograms in November of last year, to 1020.9 kilograms on February 19.

This far exceeds the 300-kilogram (660 pound) limit set in the JCPOA. Experts say this puts the country in a position to produce enough uranium to develop nuclear weapons.

IAEA head Rafael Grossi called on Iran to resume full cooperation after Tehran denied inspectors access to two installations in January, according to the IAEA’s latest report. Iranian authorities declared that they were not obliged provide information.

“We have answered the IAEA’s questions,” the Iranian IAEA ambassador said on March 20, adding that Iran would continue to cooperate intensively with the IAEA. However, the ambassador said Iran would not accept accusations of non-compliance made in tandem with the US and Israel.

Trump warns Iran against attacking US troops in Iraq

Iran, US heat up war of words despite virus pandemic