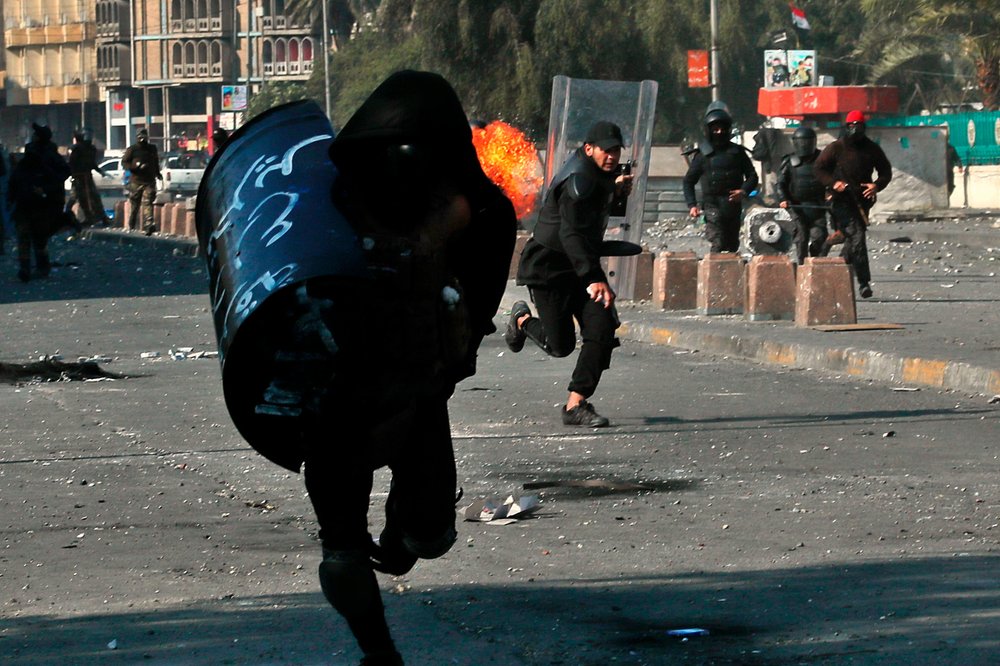 BAGHDAD (AP) — Iraq’s most powerful religious figure, Grand Ayatollah Ali al-Sistani, reiterated Friday his condemnation of the use of force against anti-government protesters as the mass movement enters a critical juncture and political blocs tussle over naming a new premier.

Separately, at least four rockets landed around an airbase hosting US troops in northern Iraq without any casualties, Iraqi military officials said. The officials spoke on condition of anonymity because they was not authorized to speak to media.

Meanwhile, an influential and radical cleric Muqtada al-Sadr called for his followers to return to the street, one week after he withdrew support for anti-government demonstrators camped out in Baghdad’s Tahrir Square. The move comes one day before a deadline set by Iraq’s president to select the next prime minister runs out.

Al-Sistani’s comments came as unrest continued in Baghdad’s Khilani and Wathba squares, where at least 11 demonstrators were wounded Friday by security forces firing tear gas canisters to disperse crowds, according to security and medical officials. The officials spoke on condition of anonymity in line with regulations.

The area has become a flash point in the recent escalation staged by demonstrators to refocus public attention on the demands of the four-month protest movement after a US airstrike that killed a top Iranian general in Baghdad monopolized Iraqi politics.

Protesters had called for one million Iraqis to take to the streets Friday to revitalize demonstrations and pressure the government to implement a reform agenda after al-Sadr withdrew his followers from the street last week. Al-Sadr’s pullout was followed by a security crackdown on protest camps. Tents were burned and at least four protesters were killed in Baghdad and Iraq’s south.

In an apparent reversal of position, al-Sadr issued a statement calling on his followers to “renew” the demonstrations and return to the street, amid deadlock over the naming of a new prime minister. He said large demonstrations were necessary to pressure political elites to form a new “non-controversial” government and hold early elections.

Dozens of his followers soon streamed into the Tahrir square carrying blankets and furniture and re-erecting tents, activists and security officials said. Officials spoke on condition of anonymity in line with regulations.

A statement from the Baghdad Operations Command said security forces “charged with protecting protesters” in Khilani Square had been attacked by a hand grenade, leading to four injured.

“Our forces continue to exercise the highest levels of restraint despite these repeated attacks on them,” the statement said.

Al-Sadr is the head of political bloc Saeroon, which won the most seats in Iraq’s 2018 federal election but not enough to secure a commanding majority in Iraq’s parliament. Outgoing prime minister Adil Abdul-Mahdi, who resigned in December under pressure from protesters, came to power under a political agreement struck between Saeroon and rival bloc Fatah, headed by Hadi al-Ameri.

For two months, negotiations between the divided factions have been deadlocked and al-Sadr has routinely drawn on his ability to mobilize his followers as leverage. President Barham Saleh has given the parties until Saturday to name a candidate or he would do so himself.

Analysts and Iraqi officials said al-Sadr’s about-face was designed to ensure political elites selected his choice of candidate as the clock ticks on Saleh’s deadline.

“He is reasserting his populist credentials and his position in the protest movement,” said Fanar Haddad, senior research fellow at the Middle East Institute, National University of Singapore. “He wants to rally his base, mend some recently damaged fences and raise the pressure on his political rivals as the stalemate over government formation continues.”

Al-Sadr’s departure last week had created clear divisions between his followers and other anti-government protesters in the square.

“All those who are already in protest squares are your brothers,” al-Sadr’s statement said. “Never be divided in slogans, sayings or deeds.”

At least four rockets struck Qayara air base in Nineveh province which hosts U.S. troops, but caused no casualties, Iraqi army officials said. The officials spoke on condition of anonymity because they was not authorized to speak to media.

A statement from Iraq’s military said five rockets had landed in the vicinity of the base.

It is the latest attack to target American interest since mortars struck the American embassy last Sunday, wounding one. Tensions soared after the US strike that killed top Iranian general Qassem Soleimani on Iraqi soil. Tehran retaliated for the killing by launching a barrage of missiles on on two Iraqi military bases hosting American troops.

Al-Sistani reaffirmed his condemnation of the use of violence against demonstrators in his weekly sermon, delivered in the holy city of Karbala through a representative. Al-Sistani’s opinion holds sway over many Iraqis and elites.

His stances have often sided with the protesters who first took to the streets Oct. 1 to decry rampant government corruption, poor services and unemployment. Though their demands are varied, most want snap elections, reforms and a change of political leadership.

In his sermon he condemned, “the use of violence against peaceful demonstrators, the assassinations and kidnappings of some of them,” and “categorically refused” attempts by security forces to break up peaceful sit-ins using violence and force.”

Al-Sistani also reiterated calls on political blocs to name a new prime minister and form a new government “as soon as possible,” to avoid political crisis and instability.

Iraqi protesters defy top cleric and return to the streets