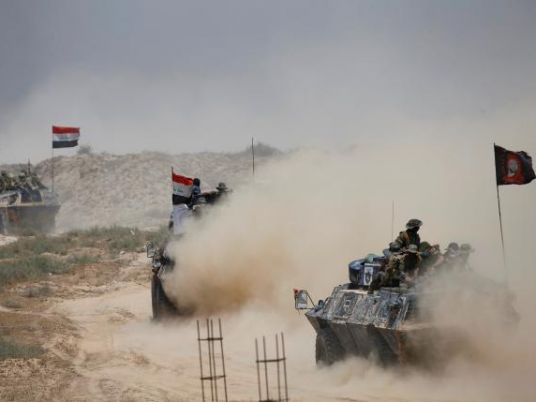 Iraqi forces shelled Islamic State targets in Falluja on Tuesday, the second day of an assault to retake the militant stronghold just west of Baghdad, as international concern mounted for the security of civilians.

Residents in the city, 50 km from the capital, reported sporadic shelling around the city centre, but said it was less intense than on Monday.

"No one can leave. It's dangerous. There are snipers everywhere along the exit routes," one resident told Reuters by internet.

The United Nations refugees agency UNHCR said women and children died while trying to leave the city. Over 80 families had managed to escape since May 20, it said in a statement.

About 100,000 civilians are estimated to be in Falluja which, in January 2014, became the first Iraqi city to be captured by Islamic State, six months before the group declared its caliphate. The population was three times bigger before the war.

The Iraqi military said it had dislodged the militants from Garma, a village to the east, overnight. No casualties were reported by the army or the city's main hospital. On Monday, eight civilians and three militants were killed, and 25 people wounded, 20 of them civilians, according to the hospital.

The US-led coalition "is providing air power to support the Iraqi government forces in Falluja," its spokesman, US Army Col. Steve Warren, told Reuters by phone.

The United Nations and the International Committee of the Red Cross issued statements on Monday evening appealing for the warring parties to protect civilians, who have limited access to food, water and healthcare and who now risk being used as human shields.

Even the militants have had to scrounge and conserve supplies, collecting plastic objects to turn into makeshift fuel and conducting patrols on bicycle, residents told Reuters.

Prime Minister Haider al-Abadi said the armed forces had been "instructed to preserve the lives of citizens in Falluja and protect public and private property."

"Those who cannot take the exit routes, they can stay at home and not move," he added in comments aired by state Iraqi TV while on visit to the field command center near Falluja.

The Association of Muslim Scholars of Iraq, a hardline political organisation formed in 2003 to represent minority Sunnis, on Monday condemned the campaign as "an unjust aggression, a reflection of the vengeful spirit that the forces of evil harbour against this city".

It said in a statement nearly 10,000 residents had been killed or wounded by government shelling over the past two years, which Reuters could not verify, and warned any victory would be "illusory".

The military campaign could take "many weeks, if not longer", predicted Ranj Alaaldin, an Iraq expert at the London School of Economics, due to lingering support for Islamic State among many residents who may still prefer the militants to a Baghdad government long perceived as sectarian and repressive.

In a nod to local sensitivities, Iraqi officials say Shi'ite militias, grouped under a loose government umbrella to help boost the army and police following partial collapses since 2014, would be restricted to operating outside the city limits.

Abadi ordered the offensive despite concerns that it could divert resources from a push later this year to retake Mosul, Islamic State's de facto capital in Iraq.

"You do not need Falluja in order to get Mosul," Warren, the anti-IS coalition spokesman, said in a phone interview at the weekend.

A series of bombings that killed more than 150 people in one week in Baghdad, the highest death toll so far this year. cranked up the pressure on Abadi to do something about the city seen by many Shi'ite politicians as an irredeemable bulwark of Sunni Muslim militancy.

"The intelligence indicates that this recent IS resurgence in Baghdad through some sleeper cells originated from Falluja," said senior lawmaker and former national security adviser Mowaffaq al-Rubaie. "Falluja is too close to Baghdad."

Reuters could not independently verify that claim and the authorities have not publicly made such statements.

The UNHCR voiced concern for the safety of the men and older boys who manage to escape to the army lines, as they are separated from their families by the Iraqi forces, for security screening.

"Screenings are ideally completed in two days but we remain concerned for the safety of men who are separated as well as their wives and children who are in an especially vulnerable situation," said the organization.