BEIRUT (AP) — When Syrian President Bashar Assad made a rare visit to Tehran last year, the powerful Revolutionary Guard commander Qasem Soleimani was there to greet him, along with Iran’s supreme leader and president. Iran’s foreign minister wasn’t, and he resigned in protest at being excluded from talks with a crucial ally.

It was a telling episode on who controls Iran’s policy in Syria.

Iran’s frontman in Syria since 2011, Soleimani helped turn the tide in the now nearly 9-year-old civil war, intervening to save Assad as armed rebels reached the capital, Damascus, and seized several key cities. He welded together Shia militias from across the region to back Syria’s military and waged a series of sieges that captured back territory, wreaked heavy bloodshed and destruction and prevented the collapse of Assad’s state.

His killing in an U.S. airstrike in Iraq is likely to rattle thousands of Iran-backed fighters in Syria. The networks of militias he set up will remain in place, and Syria is likely to become a scene for confrontation with hundreds of U.S. troops stationed there.

The Iranian-backed militias are scattered all over Syria, including near civilians and some near American positions, said Danny Makki, a Syrian analyst based in Britain. If the U.S.-Iranian conflict escalates — “as is very likely,” he said — the U.S. or Israel could strike the militias, or the Iranian-backed fighters could attack American positions, which are in the eastern part of Syria, including near Kurdish-controlled oil fields that Damascus is eager to regain.

“The battleground will be Syria and Iraq,” Makki said. “It could go bad on multiple levels.”

Soleiman’s killing could also have a resounding knock-on effect in Syria. If Iraq’s government forces U.S. troops to leave Iraq in protest at the killing, American soldiers in eastern Syria would lose a vital logistics and supply line and would likely have to pull out as well. That in turn would leave the Americans’ ally, the Syrian Kurds, vulnerable. Iraq’s Parliament on Sunday demanded that U.S. troops leave, but it is not immediately clear if the government will carry out the threat.

Soleimani, known simply as the General, transformed Iran’s traditional role of supporting proxies focused on challenging Western influence to forging paramilitary forces that could prop up a ruler and a traditional army.

He led Iran’s intervention in Syria when it became clear to Tehran, early on in the war, that its only state ally in the region was on the verge of collapse in the face of rebels. That would have endangered a vital hub for Tehran: Assad’s state provided access to Iran’s most important and professional militia ally, Lebanon’s Hezbollah, gave depth and protection to its influence in Iraq and put Iranian influence on the border with Israel.

Soleimani, at the head of the Revolutionary Guards’ Quds Force, brought in and organized thousands of Shia militiamen from Lebanon, Iraq, Afghanistan, Pakistan and Iran to back Assad’s overstretched military, providing firepower and skills. He reorganized Syria’s own various paramilitary groups into one force, injecting disciplined fighters into the otherwise drained troops.

It was also Soleimani who negotiated joint military operations with Russia in 2015, two months before Russia began its airstrikes in Syria. In April 2016, Russia carried out airstrikes inside Syria from Iran, the first time a foreign state operated inside Iran since World War II, according to the International Institute for Strategic Studies.

He set battlefield priorities, wresting strategic areas from opposition control one by one. An early objective was Qusayr, a town near the border with Lebanon key to supply lines with Hezbollah, then central cities and suburbs around Damascus and a top prize, Syria’s largest city, Aleppo. When Aleppo was recaptured in 2016, it was Soleimani, not Assad, who visited the city.

His opponents say he introduced some of the most brutal tactics of the war, particularly the use of long, devastating sieges of populated areas that strangled civilians and clawed back territory until resistance collapsed. The tactic killed or displaced hundreds of thousands of civilians and left urban areas in ruins. Moreover, pitting Shia militias against the largely Sunni opposition deepened the war’s sectarian nature and fueled atrocities.

“He was the godfather of demographic change in Syria … His hallmarks are on every massacre that happened in an area cleared of its people, starting from Homs, Ghouta, Daraa and Aleppo,” said Tarek Muharram, an opposition fighter from Aleppo who fought against Iranian-backed militias.

“Those tactics won’t change much after he dies,” said Abdul-Salam Abdul-Razek, a defecting Syrian army officer who also fought against Soleimani’s militias.

Displaced Syrians celebrated Soleimani’s killing, with some distributing sweets or shouting thanks to U.S. President Donald Trump. In one of the last opposition-held cities in northern Syria, men danced and sang in a public square.

“We woke up to the best news,” said Jamil Andani, a displaced man in Idlib. Soleimani “made us suffer. He was our worst enemy.”

For Assad and his forces, Soleimani was a savior.

Eulogizing Soleimani, Assad said he left “clear marks in his victories against terrorist groups” in Syria.

The question now is how much impact Soleimani’s death will have on the forces he led. Besides his skill as a strategist and tactician, Soleimani was a powerful presence in the field, often showing up in operations rooms to direct fighting or at front lines to boost morale.

“The Syrian-Iranian alliance will continue that’s for sure,” Makki said. “But the loss of Soleimani, the mastermind of so many victories, plans and strategies will be a big blow for Syria and Iran on a policy level and in terms of regional clout.”

Assad said the tactics used by the general will only grow and be entrenched in the young men he trained.

Reflecting concerns over the effect of Soleimani’s killing, Hezbollah leader Hassan Nasrallah said advances made in Syria should not stall, urging fighters to be steadfast and all Iran proxies to fight the U.S. presence in the region.

“No one should be shaken or worry or be afraid,” Nasrallah said Sunday. “We should continue the path firmly toward victory.”

Image: In this Nov. 22, 2013 file photo, Iraqi and Lebanese Shiite fighters from a group called the Hussein Brigade, loyal to Syria’s President Bashar Assad, use a helmet to draw a sniper into view during clashes against the Free Syrian Army in the town of Hejeira, Syria, outside the capital Damascus (AP Photo/Jaber al-Helo, File) 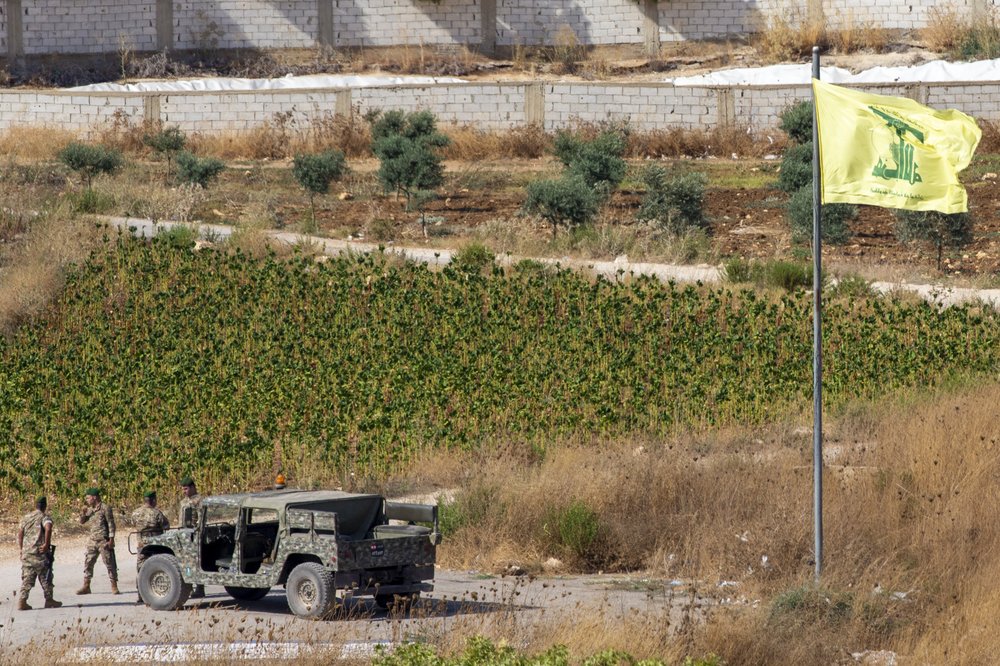