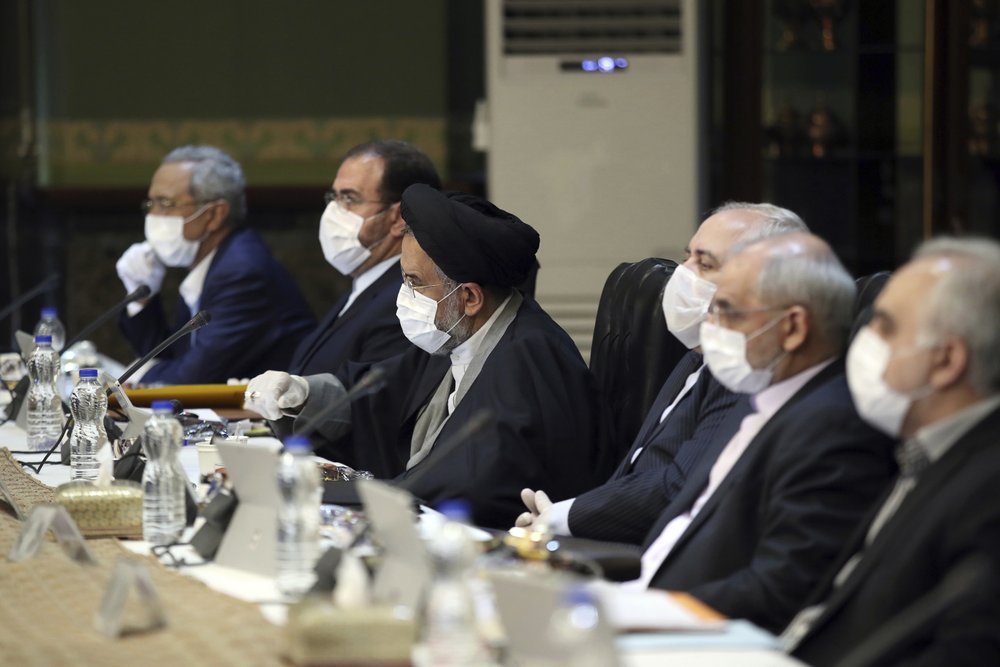 TEHRAN (AP) — Iran reported its single biggest jump in deaths from the new coronavirus on Wednesday, saying that another 147 had died in a nearly 15% spike that raises the death toll to 1,135 people nationwide.

It marks the biggest 24-hour rise in deaths since officials first acknowledged cases of the virus in Iran in mid-February.

The rise in deaths comes as the number of cases continues to grow each day, with some 17,361 people having been infection nationwide, according to a briefing Wednesday by Iran’s deputy health minister, Alireza Raisi.

The outbreak has cast a shadow over the Persian New Year, Nowruz, a normally joyous holiday that begins on Friday. Health officials have urged the public to avoid travel and crowded places. But many seem to be ignoring the warnings, raising the risk of further outbreaks.

Some food markets in the capital, Tehran, were still packed on Wednesday, and highways were crowded with traffic as families traveled between cities. Iran also announced it would close mosques for communal Friday prayers for a third consecutive week. Other Muslim countries, including Saudi Arabia, Kuwait and the United Arab Emirates have also cancelled Friday prayers in mosques.

Raisi criticized people for not adhering to the warnings, saying on national television the virus is very serious. “This is not a good situation at all,” he said as he implored people to stay home.

Iran’s President Hassan Rouhani on Wednesday defended his government’s response to the coronavirus outbreak in the face of of widespread criticism that officials acted too slowly and may have even covered up initial cases before infections rapidly spread across the country.

In a speech to his Cabinet, Rouhani said the government was “straightforward” with the nation, saying it announced the outbreak as soon as it learned about it on Feb. 19.

“We spoke to people in a honest way. We had no delay,” he added.

The government has come under heavy criticism for what has been seen as a slow and inadequate response. For weeks, government officials implored clerics to shut down crowded holy shrines to stymie the spread of the virus. The government finally closed the shrines this week.

“It was difficult of course to shut down mosques and holy sites, but we did it. It was a religious duty to do it,” Rouhani said.

The new coronavirus has spread to more than 100 countries, infected more than 195,000 people worldwide and killed more than 7,800. For most people, it causes only mild or moderate symptoms, such as fever and cough. For some, especially older adults and people with existing health problems, it can cause more severe illness, including pneumonia. The vast majority of people recover from the new virus.

In Israel, meanwhile, the Health Ministry said 90 more people had tested positive, bringing the country’s overall number to 427, a day after authorities issued a new series of guidelines that put Israelis in near-shutdown mode. Israel has ordered tens of thousands into home quarantine, turned hotels into hospitals and was setting up drive-thru testing centers.

In a nationwide address Tuesday night, Israeli Prime Minister Benjamin Netanyahu warned of catastrophic consequences if people don’t follow safety instructions. “This is a huge crisis. We are only at the start of the campaign.”

Most controversially, the Israeli government has instructed the shadowy Shin Bet internal security service to start deploying the agency’s phone surveillance technology to help curb the spread of the new coronavirus in Israel by tracking the moves of the infected. The step has sparked widespread criticism from lawmakers and civil rights groups.

In Iraq, a week-long curfew went into effect in Baghdad where streets were largely empty of both people and cars, and most shops were closed. Only pedestrians were allowed on the streets to buy necessary foodstuffs and medicine. Armed Iraqi police were seen patrolling the city and setting up roadblocks.

Still, some pilgrims in Iraq defied the curfew order to observe the annual Shia Muslim commemoration of the death of Imam Mousa al-Kazim. Thousands typically make the journey on foot to the revered imam’s shrine in the Khadimiya area outside of Baghdad. Several men, women and children walked solemnly down Baghdad’s Saadoun Street on Wednesday, determined to complete the journey to the shrine. Police stationed nearby did not intervene to stop them.

Demonstrators in Tahrir Square, the hub of Iraq’s anti-government protest movement, issued a collective statement that they were suspending protest activities to help stop the spread of the virus. Iraq has had 11 deaths among 154 confirmed cases of the virus, which causes the COVID-19 illness.

In Egypt, authorities started to close shops to encourage people to stay at home. Coffee shops and restaurants were shuttered on Wednesday in Cairo, a city of over 20 million, while plain-clothed security forces urged people to go home.

“I am financially ruined, how can I earn my living now,” said Mohammed Gamal, a worker in a coffee shop that was shut down.

Egypt, which has reported nearly 200 cases and six deaths from the virus, has suspended flights, closed schools, is quarantining more than 300 families in a Nile Delta village, and imposed a lockdown in the Red Sea resort town of Hurghada.

As global stock markets remain volatile, the United Arab Emirates’ Securities and Commodities Authority announced early Wednesday that local exchanges would only be able to fluctuate 5% before being shut down.

Meanwhile, the leaders of the world’s 20 biggest economies may hold an extraordinary virtual meeting next week about advancing a coordinated response to the pandemic. Saudi Arabia, which currently leads the G20 presidency, said it is communicating with countries to convene the virtual meeting of leaders.

In Pakistan, Foreign Minister Shah Mahmood Qureshi, who this week visited China along with the country’s president Arif Alvi, said he is protectively quarantining himself on his physician’s advice.