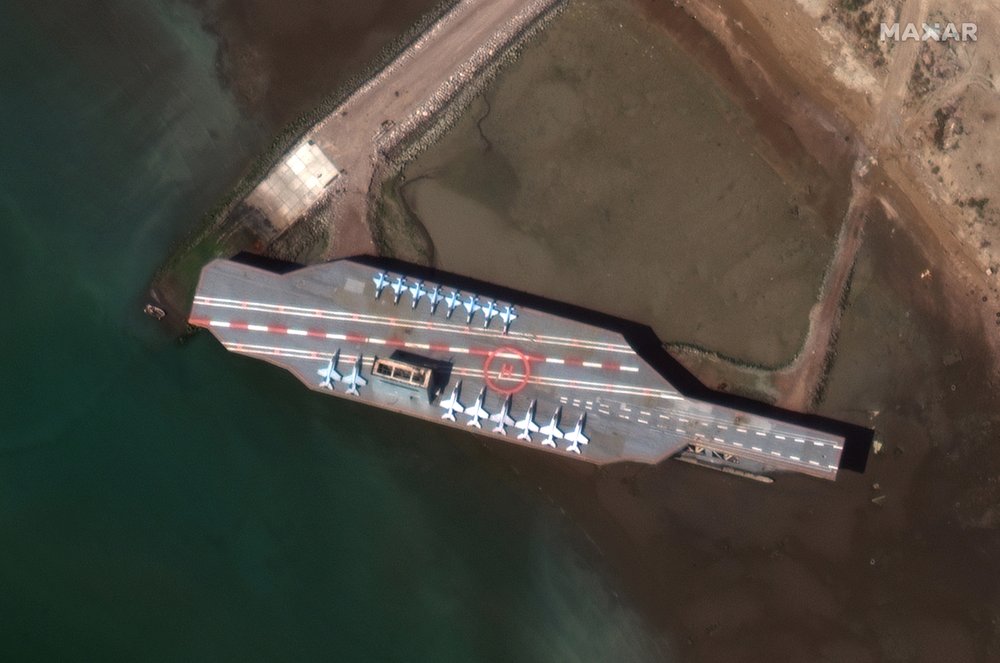 DUBAI, United Arab Emirates (AP) — Iran has moved a mock aircraft carrier to the strategic Strait of Hormuz amid heightened tensions between Tehran and the US, satellite photographs released Monday show, likely signalling the Islamic Republic soon plans to use it for live-fire drills.

An image from Maxar Technologies taken Sunday shows an Iranian fast boat speed toward the carrier, sending waves up in its wake, after a tugboat pulled her out into the strait from the Iranian port city of Bandar Abbas.

Iranian state media and officials have yet to acknowledge bringing the replica out to the Strait of Hormuz, through which 20 percent of the world’s oil passes. However, its appearance there suggests Iran’s paramilitary Revolutionary Guard is preparing an encore of a similar mock-sinking it conducted in 2015.

The US Navy’s Bahrain-based 5th Fleet, which patrols Mideast waterways, remains “confident in our naval forces’ ability to defend themselves against any maritime threat,” said spokeswoman Cmdr. Rebecca Rebarich when asked about the faux carrier’s movements.

“We cannot speak to what Iran hopes to gain by building this mockup, or what tactical value they would hope to gain by using such a mock-up in a training or exercise scenario,” Rebarich told The Associated Press. “We do not seek conflict, but remain ready to defend US forces and interests from maritime threats in the region.”

The replica resembles the Nimitz-class carriers that the US Navy routinely sails into the Persian Gulf from the Strait of Hormuz, the narrow mouth of the waterway. The USS Nimitz, the namesake of the class, just entered Mideast waters late last week from the Indian Ocean, likely to replace the USS Dwight D. Eisenhower in the Arabian Sea.

It remains unclear when or if the Nimitz will pass through the Strait of Hormuz or not during its time in the Mideast. The USS Abraham Lincoln, deployed last year as tensions initially spiked, spent months in the Arabian Sea before heading through the strait. The Eisenhower came through the strait early last week.

The mock-up strongly resembles a similar one used in February 2015 during a military exercise called “Great Prophet 9.” During that drill, Iran swarmed the fake aircraft carrier with speedboats firing machine guns and rockets. Surface-to-sea missiles later targeted and destroyed the fake carrier.

That drill, however, came as Iran and world powers remained locked in negotiations over Tehran’s nuclear program. Today, the deal born of those negotiations is in tatters. President Donald Trump unilaterally withdrew America from the accord in May 2018. Iran later responded by slowly abandoning nearly every tenant of the agreement, though it still allows UN inspectors access to its nuclear sites.

Last summer saw a series of attacks and incidents further ramp up tensions between Iran and the US. They reached a crescendo with the Jan. 3 US drone strike near Baghdad International Airport that killed Qassem Soleimani, head of the Guard’s expeditionary Quds, or Jerusalem, Force. Iran retaliated with a ballistic missile attack that injured dozens of American troops stationed in neighboring Iraq.

Given the timing of Iran moving the replica to sea, with satellite photos showing it being tugged out of port on Saturday, a drill targeting it may be a direct response from Tehran to an incident last week. That event involved a US F-15 fighter jet approaching a Mahan Air flight over Syria, which saw passengers on the Iranian jetliner injured.

Image: In this Feb. 15, 2020, satellite photo provided on July 27, 2020, by Maxar Technologies, a mockup aircraft carrier built by Iran is seen at Bandar Abbas, Iran, before being put to sea. Satellite photographs released Monday, July 27, showed Iran has moved the aircraft carrier out to sea likely for naval drills amid heightened tensions between Tehran and the US. (Maxar Technologies via AP)

Amid US tension, Iran builds fake aircraft carrier to attack