This edited interview of President Nicos Anastasiades, of the Republic of Cyprus, was originally authored by Gamaa Hamduillah and Fady Francis, and published by Egyptian newspaper Al-Masry Al-Youm on Friday, December 7, 2018.

Al-Masry Al-Youm: After the 30 June Revolution, and President Abdel-Fattah al-Sisi’s 2014 rise to power in Egypt, the past four years witnessed a great development of Egyptian-Cypriot relations, in all fields and departments. How do you see the future of relations between Egypt and Cyprus, during President Sisi’s second term?

President Anastasiades: Bilateral relations between Cyprus and Egypt are at their highest point ever, and this reflects our readiness to further broaden our ties in the future, and reach the full potential of our partnership, including engaging the private sector. It is always with great pleasure that I meet President Sisi, and I look forward to continuing close work together, with the common aim of promoting peace, stability and prosperity in our region.

We consider the exchanging of high-level visits and the signing of various agreements between our countries, both at the bilateral and trilateral level, to be of strategic significance for the three countries – Egypt, Cyprus, and Greece – and I am confident that we will continue exploring the promising prospects of our cooperation, in a multitude of areas.

Egypt is one of our most important neighbours and partners in both the Eastern Mediterranean and the wider region, and my Government is working tirelessly to deliver the positive and concrete results we expect from this dynamic partnership, so as to keep up with the momentum and ensure it continues to develop.

At the same time, I wish to stress that our cooperation is not directed against any other country of the region, including Turkey as well. On the contrary, our aim remains to institutionalize cooperation and dialogue with all neighboring countries, provided that these countries respect international law.

AMAY: And how do you see the results of the recent agreement signed by the Egyptian Minister of Petroleum with the Minister of Energy of Cyprus, regarding the extension of the natural gas pipeline from the Aphrodite field to Egypt?

Anastasiades: The signing of the agreement between Cyprus and Egypt for the direct submarine natural gas pipeline is a significant milestone, not only for Cyprus and Egypt, but also for the European Union and our immediate region, and it would contribute significantly towards the promotion of our common interests.

For Cyprus, this important development constitutes another step forward towards our main objective: the effective exploitation of our natural resources within our Exclusive Economic Zone (EEZ), especially from the “Aphrodite” natural gas field, for the benefit of all Cypriots.

Furthermore, it is an agreement that strengthens the joint efforts of the Eastern Mediterranean countries to create synergy in order to attract investments for hydrocarbon production and transportation infrastructure, since the agreed pipeline crossing the EEZ of both Cyprus and Egypt will be beneficial for all stakeholders involved. The presidents of Egypt, Greece, and Cyprus hold a tripartite summit in November 2014.

AMAY: There is a great effort by the Egyptian government to make Egypt a center of energy in the region and the world. How can Cyprus contribute to achieving this goal?

Anastasiades: The energy cooperation between our two countries is an indispensable part of our common vision of creating conditions of stability and security in the region.

The export of natural gas from “Aphrodite”, in the form of LNG – through the pipeline we have agreed to construct – will enable us to transport the first quantities of natural gas from the Eastern Mediterranean to the European Union, thus contributing to the Union’s policy for energy security and diversification of sources and routes.

It is very important that Egypt, in close partnership with Cyprus, will be part of this significant project. At this point, I need to stress that the European Union strongly supports Egypt’s role in becoming an energy hub in the Mediterranean, and shares our belief that the strengthening of the EU-Egypt relations and cooperation is of strategic significance for Europe.

AMAY: There are repeated Turkish attempts to disrupt Cyprus’s efforts to benefit from its natural resources, in the Exclusive Economic Zone. How do you view such attempts?

Anastasiades: Turkey’s illegal actions in Cyprus’s EEZ constitute a flagrant violation of international and EU law. But despite these provocations, our aim remains to successfully implement our ambitious exploration program, in full cooperation with all our partners, countries and energy companies.

The overall energy strategy of the Republic is based on three fundamental principles:

• The full respect of International Law, in particular of the UN Convention of the Law of the Sea (UNCLOS).
• The creation of significant prospects for economic and investment cooperation, for the mutual benefit of our peoples.
• Our common stance that the discovery of hydrocarbon reserves in the Eastern Mediterranean may – and should – act as a catalyst for wider regional cooperation, thereby contributing to the security, stability and prosperity of the region.

AMAY: What is Cyprus’s position on Turkey’s refusal to recognize Cyprus’s border delimitation agreements with a number of countries in the region – particularly Egypt?

Anastasiades: As I have already mentioned, Cyprus and Egypt share a vision of creating conditions of security, stability and international cooperation in the region. Regrettably, Turkey does not share this vision. Turkey’s illegal actions in the Republic of Cyprus’s maritime zones, and the statements on the validity of our EEZ Delimitation Agreement, undermine our efforts to fulfill this vision.

The legitimacy of this agreement cannot be questioned; an agreement which is fully compatible with international law and UNCLOS. The same applies to the delimitation agreements Cyprus has signed with other countries as well. Such behaviour is best countered through our determination, and willingness to further strengthen our cooperation. Therefore, any attempts to challenge these agreements are unacceptable, and contradict not only international law, but the spirit of establishing good, neighborly relations between nations.

AMAY: The “Nostos” initiative held in Alexandria for Egypt’s Greek and Cypriot communities led to a great sense of welcoming and friendship. Will this initiative be repeated?

Anastasiades: The “Nostos: The Return” project that took place in Alexandria in April 2018 was a symbolic event, which underlined the close historic links between the peoples of our three countries, and highlighted our joint efforts and commitment to build ties on diaspora issues, as part of the tripartite mechanism of cooperation between Cyprus, Egypt and Greece.

I am very pleased that this successful Egyptian initiative proceeded to the next phase, with the second Nostos program held in London in October, and the next one is already being planned in Athens.

Diaspora has proven to be among the most valuable and important tools for the three countries to promote their common interests, and Cyprus is committed to the continuation and the expansion of the program, with more focus being placed in diaspora youth and the future generations. 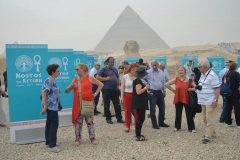 AMAY: During your last meeting with Secretary-General of the United Nations Antonio Guterres, he mentioned that the United Nations was committed to helping with the Cypriot conflict. Are we expected to see resumed negotiations to solve this problem in the coming period, and what are your conditions for continuing negotiations?

Anastasiades: Following the unsuccessful outcome of the last Conference on Cyprus, at Crans Montana in July 2017 – due to Turkey’s insistence on its long-standing continuation of the anachronistic system of guarantees, the unilateral right of intervention, and a permanent presence of Turkish troops – the UN Secretary-General decided to give yet another opportunity to resume dialogue.

To this end, Mr. Guterres appointed Mrs. Jane Hall Lute as his Special Envoy, with whom I had the opportunity to meet in Nicosia twice already to present our positions, as well as discuss the current state of play, and the way forward.

I, yet again, reiterated to Mrs. Lute that I remain strongly committed to resuming the negotiating process, on the basis of the six-parameter framework set by Mr. Guterres, and to continue working in a constructive way with the UN Secretary-General, as well as with our Turkish Cypriot compatriots and the three guarantors, so as to create sound prospects of reaching a comprehensive settlement. A settlement that will create the conditions for prosperity and peaceful co-existence between all Cypriot citizens, in an environment of safety and stability.

Good preparation is also needed for the resumption of talks on the basis of goodwill and a constructive stance from all stakeholders (particularly by the Turkish side) in order to safeguard the positive outcome of negotiations.

AMAY: What’s the best solution for the Syrian crisis?

Anastasiades: As a country that still faces the tragic consequences of the Turkish invasion and the illegal occupation of 37% of its territory, Cyprus is particularly sensitive to the critical issue of Syria’s unity and territorial integrity. Cyprus remains deeply concerned that the Syrian political process has not proceeded at the pace we all hoped for. In fact, in many ways, it is at a standstill.

The first priority cannot be other than the complete ceasefire, the end of hostilities and the safety and protection of the civilian population. There cannot be a military solution to the crisis.

We are fully committed in reaching a political solution that safeguards the unity, sovereignty, territorial integrity and independence of Syria, as well as the rights of all its citizens, in order to guarantee a safe and sustained humanitarian access throughout the country.