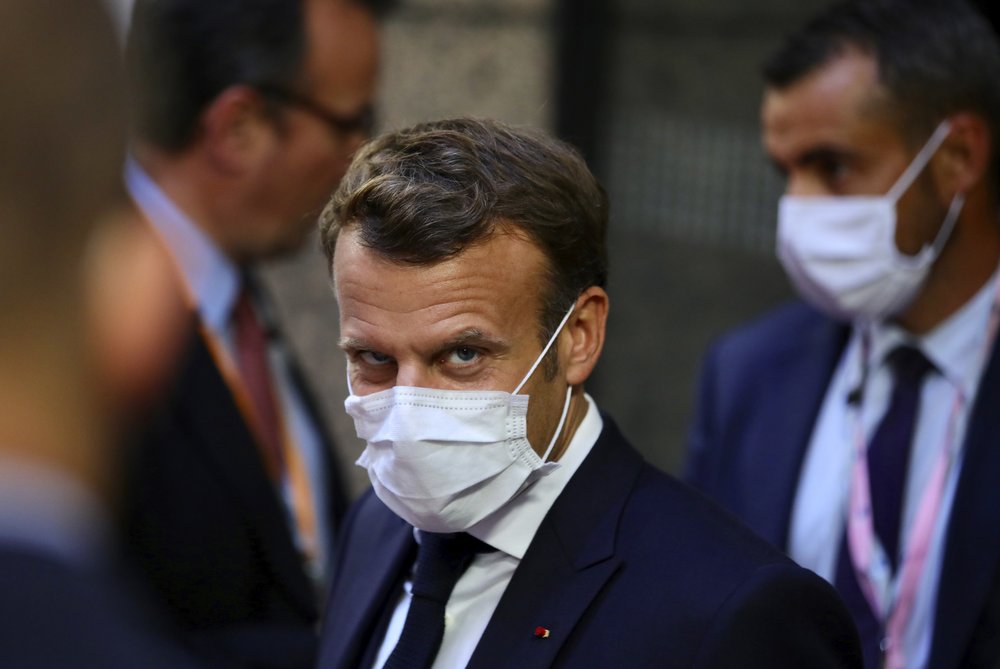 BRUSSELS (AP) — Weary and bleary, European Union leaders were gearing up Monday for a fourth day of fighting over an unprecedented 1.85 trillion-euro ($2.1 trillion) EU budget and coronavirus recovery fund, barely recovered from a weekend of walkouts, fists slamming into tables and insults.

With a brilliant sun warming the negotiating sundeck at the Europa summit center early Monday, there finally was a glimmer of hope that the talks to help the continent emerge from the pandemic through an unprecedented economic aid package are not doomed after all.

“It looks more hopeful than when I thought during the night: ‘It’s over,’” said Dutch Prime Minister Mark Rutte, the target of much of the criticism. The meeting broke up temporarily and is due to resume on Monday afternoon.

It took a heart-tugging dinner speech by EU Council President Charles Michel about leaders not failing their union, French President Emmanuel Macron slamming his fist in anger into the table, and a new set of budgetary numbers to send this epic summit onward.

It was planned as a two-day summit scheduled to have ended Saturday, but there are deep ideological differences between the 27 leaders forced the talks into two extra days.

Rutte, defending the cause of a group of five wealthy northern nations — the Netherlands, Austria, Finland, Sweden and Denmark — sought to limit costs and impose strict reform guarantees. He came under criticism from Macron, Italy and Hungary, whose Prime Minister Viktor Orban asked why the Dutchman had such “hate” toward him.

Rutte took it in stride.

“We are not here because we are going to be visitors at each other’s birthday party later. We are here because we do business for our own country. We are all pros,” he said.

On Sunday night, after three days of fruitless talks and with hope dimming, Michel implored leaders to overcome their fundamental divisions and agree on the budget and recovery fund.

“Are the 27 EU leaders capable of building European unity and trust or, because of a deep rift, will we present ourselves as a weak Europe, undermined by distrust,” he asked the leaders. The text of the behind-closed-doors speech was obtained by The Associated Press.

“I wish that we succeed in getting a deal and that the European media can headline tomorrow that the EU succeeded in a Mission Impossible,” Michel said.

The pandemic has sent the EU into a tailspin, killing around 135,000 of its citizens and plunging its economy into an estimated contraction of 8.3% this year.

The bloc’s executive has proposed a 750 billion-euro coronavirus fund, partly based on common borrowing, to be sent as loans and grants to the countries hit hardest by the pandemic. That comes on top of the seven-year 1 trillion-euro EU budget that leaders had been haggling over for months even before the pandemic hit.

Even with Macron and German Chancellor Angela Merkel negotiating as the closest of partners, the traditionally powerful Franco-German alliance could not get the quarreling nations in line.

At their dinner table Sunday night, the leaders mulled a proposal from the five wealthy northern nations that suggested a coronavirus recovery fund with 350 million euros of grants and the same amount again in loans. The five EU nations — nicknamed “the frugals” — had long opposed any grants at all, while the EU executive had proposed 500 million euros.

“We are ready to take the leap from loans to subsidies,” Rutte said.

All nations agree they need to band together but the five richer countries in the north, led by the Netherlands, want strict controls on spending, while struggling southern nations like Spain and Italy say those conditions should be kept to a minimum.

Rutte has long been known as a European bridge builder, but this weekend his tough negotiating stance was being blamed for holding up a deal. He and his allies have been pushing for labor market and pension reforms to be linked to EU handouts and a “brake” enabling EU nations to monitor and, if necessary, halt projects that are being paid for by the recovery fund.

“He can’t ask us to do specific reforms,” Italian Prime Minister Giuseppe Conte said, complaining Rutte may look like a hero in his home nation, but nowhere else.

Rutte also wants a link to be made between the handout of EU funds and the rule of law — a connection aimed at Poland and Hungary, countries with right-wing populist governments that many in the EU think are sliding away from democratic rule.

“I don’t know what is the personal reason for the Dutch prime minister to hate me or Hungary, but he’s attacking so harshly and making very clear that because Hungary, in his opinion, does not respect the rule of law, (it) must be punished financially,” Orban said.

By RAF CASERT and MIKE CORDER

Image: French President Emmanuel Macron, center, leaves the European Council building in the early morning during an EU summit in Brussels, Monday, July 20, 2020. Leaders from 27 European Union nations met throughout the night Sunday to assess an overall budget and recovery package spread over seven years estimated at some 1.75 trillion to 1.85 trillion euros. The summit will continue into its fourth day on Monday. (AP Photo/Olivier Matthys, Pool)