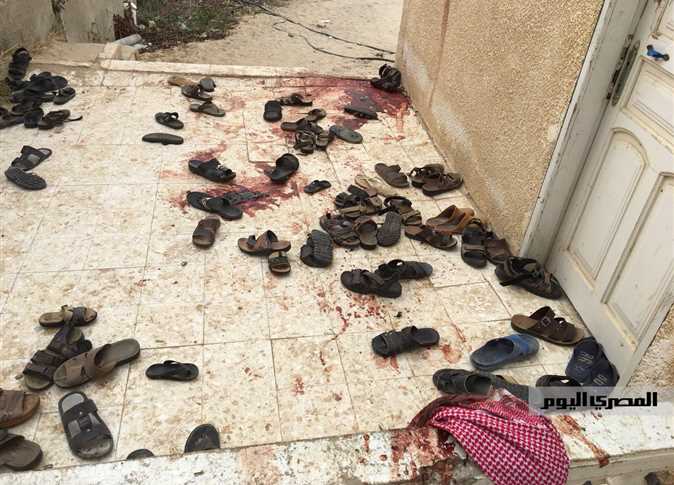 Al-Rawda, a small village to the west of the city of al-Arish, the capital of North Sinai, has lived in peace for decades. But Friday was an extraordinary day for the village as a deadly attack against a local mosque killed more than 300 people as they were performing Friday prayers.

Al-Masry Al-Youm went to the village to witness the aftermath of the attack.

500 meters ahead of the village border, the road is closed off with piles of sand blocking its entrance. In order to reach the village, we had to take a side road.

When we reached the mosque, we found its stairs covered in blood. However, its interior was even grimmer as its green carpets had turned into dark red and body parts lay scattered across the floor. We noticed small pieces of human bones which suggested that the victims had been shot at such a close range that it shattered their bones. Remains of human brains and worshippers’ clothing were also scattered across the mosque’s floor.

The walls were covered in gunfire marks and the victims’ belongings, including watches, briefcases, children’s socks and drawings, were spread out everywhere.

Most of the blood was concentrated at the mosque’s western entrance, which is a narrow door. It became clear that people were killed at that door as they tried to escape. Chairs, upon which elderly worshippers sat, had been destroyed by the gunfire.

“The Friday sermon began, and Imam Mohamad Abdul Fattah Rezaik was preaching about the birth of the Prophet [Mohamed]. The mosque can accommodate about 400 worshipers, and it was filled,” Samir al-Jariry, a young man who survived the attack, told Al-Masry Al-Youm.

“At the beginning of the second half of the sermon, we were surprised that three cars [arrived]. The first was a four-wheel drive, the second was a Chevrolet, the third was a Nissan pickup. They were deployed at the mosque’s three doors […] with 15 armed men getting out from them,” Jariry said. He added that “four of them quickly went to the gates of the mosque and threw four grenades at the mosque’s four corners”.

“Then they stood at the mosque’s three gates and fired a barrage of bullets against the heads of worshipers and the Imam. Some of the worshipers tried to escape from the doors before which the gunmen stood, but the bullets were continuous and intensive, and I personally ran away from the window,” he went on to say.

“Thank God, I did not get injured. I got away screaming and saw what happened, all my relatives were in the mosque,” he added.

Ahmed Ghanem al-Jarirat, a resident of the village, said that the attack went on for 25 minutes during which the perpetrators pursued people trying to flee while making sure the victims were in fact dead.

“The gunmen followed most of those who fled the mosque in the empty area surrounding it and shot each and every one of those who fell to the ground with a bullet in the head who they doubted was dead. This took 25 minutes,” he said.

“After the terrorists had killed the worshipers, they went to the cars belonging to them in front of the mosque and set them on fire, after pouring gasoline on them. We called the ambulance which arrived within minutes after the gunmen had left the mosque,” he went on to say.

He pointed out that the attackers opened fire on the arriving ambulance while fleeing when the army approached.

“The gunmen were hiding and fired at it directly. We saw blood coming from the paramedics. As soon as the gunmen felt the army approaching, they fled to the south,” Jarirat said.

One of the village elders Hassan Abo Jarir had 12 of his family members killed in the attack. “Most of them were brothers and cousins,” he said.

“Most of the inhabitants of the village are from the family of al-Jarirat. We follow the Sufi order of Ahmadiyya al-Jaririyah. There is a council next to the mosque where we gather every evening before Maghrib to praise and remember God. We cook large amounts of food every day to feed passers-by for free,” Abo Jarir said.

The elder went on to say that the village residents had received threats from the terrorists prior to the attack.

“We received warnings about 10 days ago from the gunmen not to [perform Sufi rituals], claiming that it is contrary to Islam,” he said.

“They killed Sheikh Hussein al-Jarirat, the village elder, who is over 80 years old. We have never seen any violence in the village because we are peaceful, and we tell the army and police about anyone suspicious to protect ourselves,” he added.

On his part, Salman Hamd Hussein, who was shot in the thigh, said he had been in the third row of the worshipers. After the first sermon of the Imam, he was surprised by the shooting and threw himself on the ground, seeing masked men firing their weapons.

He added that the villagers are religious in nature and pray regularly. He said he can barely believe what happened, pointing out that he only remembers the scene of the worshipers trying to escape from each side of the mosque immediately after the shooting started. He first thought it was an explosion but then discovered it was shooting.

Ahmed Salama, who was shot in the pelvis, described the scene as “hell”, stressing that the shooting occurred everywhere around him and some tried to escape by jumping from the windows.

He also said that children were killed in the yard of the mosque and that after he was shot fell to the ground and only felt the bodies falling on top of each other.

Sufi Islam: What you need to know after Egypt's deadly mosque attack