Facebook Twitter LinkedIn
The government has agreed with the Social Fund for Development to secure nearly LE1 billion to finance small- and medium-sized enterprises, Minister of Industry and Foreign Trade Mounir Fakhry Abdel Nour said on Wednesday, noting that the largest portion of those finances will go to projects in Upper Egypt and Sinai regions.
Asked whether the government would cut energy subsidies provided for factories, the minister said the state would adopt difficult, unpopular measures if they serve the country’s interests for the current period.
In a meeting with the American Chamber of Commerce Tuesday, Abdel Nour said the major challenge facing the current government is slashing budget deficit, as well as adding LE22 billion of investments as means to achieve the hoped growth rate of 3.5 percent.
He also noted that financial aid from Arab countries, including Saudi Arabia, Kuwait and Emirates, have helped mobilize a number of infrastructure projects such as the third Cairo subway line, adding that such undertakings admit large workforces and do not pose pressure over the state budget.
Abdel Nour noted that his ministry plans to offer more lands for industrial projects so as to offset the closure of a number of factories promoted by the economic situation.
The minister said LE3 billion have been earmarked to complete the infrastructure of 36 industrial zones over nine months.
Edited translation from Al-Masry Al-Youm
Tags
industry Mounir Fakhry Abdel Nour sinai SMEs upper egypt 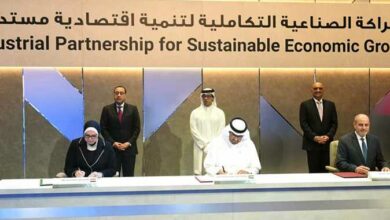