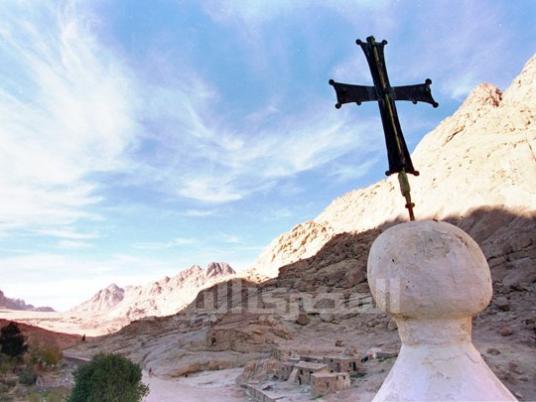 Though still giving an ocassional breath of life into the region’s dying tourism, officials have never thought of making use of the St. Catherine Airport in South Sinai since Israel handed it over to Egypt on 1982.
The facility remains largely inoperative since the 1992 Palestinian uprising that halted the flow of Israeli tourists. Meanwhile, tourist occupancy in the area stands at zero percent despite Christmas and St. Catherine’s anniversary celebrations.
Officials say the airport has served as an emergency landing strip, as well as a terminal for world leaders visiting the famous monastery, 20 km from the town. However, night landing is not supported at the facility, and luggage is transferred from the arriving planes on a pickup truck. Moreover, eighty employees are idly stand at the airport, though they still receive a salary from the state’s budget.
According to Nasser Abul Enein, a resort manager in the region, tourist agencies refuse to bring tourists to St. Catherine due to security measures that cause their buses to queue for hours, which affects their programs. He notes that the Wadi Feiran-St. Catherine road, which tourists take from Cairo, remains closed, thus obliging visitors to do an over 400-km detour through Sharm al-Sheikh.
Abul Enein says reactivating the airport will spare security effort and cost.
Hesham Kamel, public affairs manager at the St. Catherine local council, said the airport, since handed over from Israel in the 1980s, used to receive six flights until 1992, after which it only began to receive world leaders.
The Greek community in Cairo that used to mark St. Catherine’s anniversary in the city could not make it to the region this year due to the absence of flights from Cairo, Kamel adds.
Atef Abdel Latif, a tourism activist and a member of the Southern Sinai Investors Society, said the halt in the airport works isolates the city from the world. He suggested the operation of “flying taxis” to the city which, he says, hosts several “unmatchable” tourist attractions.
But according to Salman al-Gebaly, a worker at the city, investors and hotel owners are to blame for the airport's inactivity as they market their tourist programs at the city as part of their Sharm al-Sheikh programs.
Moussa Abul Heim, a safari tours organizer, says all residents, who basically depend on safari for living, are affected by the tourism recession in St. Catherine.
The airport’s former director says it only needs night illumination to complete its “enormous capabilities.” Adly Khalil says the international airport, which he labels “an architectural work of art,” used to receive 20 international flights under Israeli occupation.
Guevara al-Gafi, head of South Sinai’s tourist chambers, says he intends to discuss the airport’s problem during a meeting in Cairo, explaining that the Ministry of Civil Aviation supports flight lines based on the number of hotel rooms and workers at their destinations. He urged St. Catherine hotels to promote themselves through the internet encouraged by the numerous holy destinations the city hosts.
Edited translation from Al-Masry Al-Youm