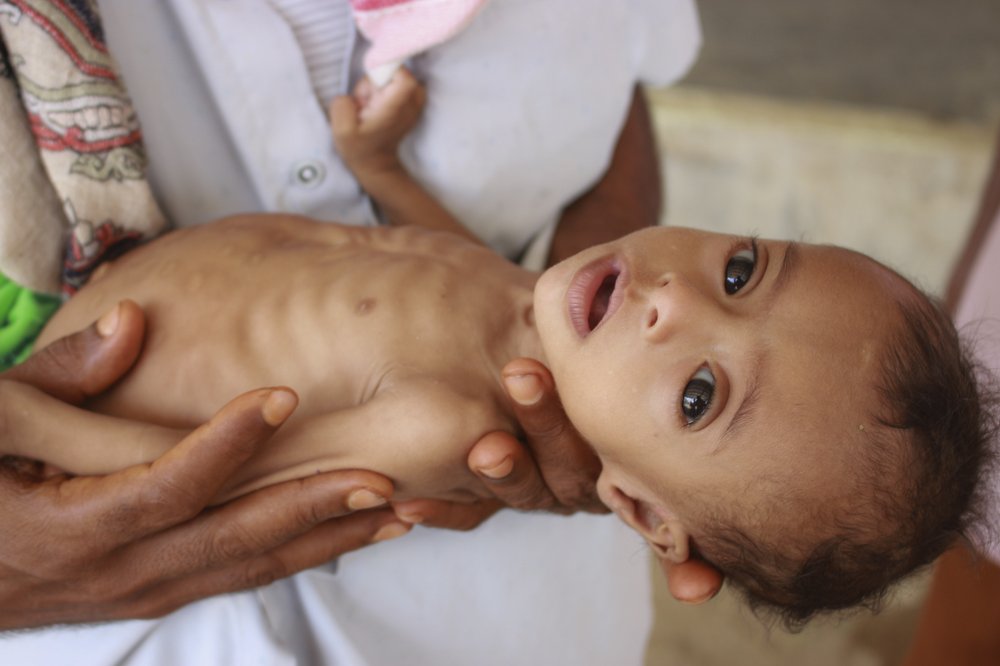 AL-HANABIYA, Yemen (AP) — When Issa Nasser was born late last year in a village in northern Yemen, his weight was about three kilograms, or 6.6 pounds. Now, the seven-month-old infant weighs nearly the same — less than half the average weight for his age — and has wafer-thin skin and emaciated limbs.

Issa’s condition mirrors what the UN children’s agency warned about last week, that millions of children in war-torn Yemen could be pushed to the brink of starvation as the coronavirus sweeps across the Arab world’s poorest country and as humanitarian agencies suffer from a huge drop in funding.

The baby’s father, Ibrahim Nasser, a 51-year-old displaced fisherman now living in the village of al-Hanabiya in the district of Abs in Hajjah province, said the family has spent most of Issa’s months-long life so far in a health care center, some 20 kilometers (12.5 miles) from the village. The ill-equipped medical center services more than 50,000 displaced people in the district.

Four years ago, when fighting between Yemen’s Houthi rebels and government forces, backed by a Saudi-led coalition, escalated, Nasser left his home village near the coastal city of Midi, also in Hajjah province, on the border with Saudi Arabia.

Since then, he has been unemployed and depends on aid to feed his family, which became part of more than three million people displaced by the war, many pushed to the brink of famine amid stalemated fighting and a coronavirus pandemic that is ripping through the country.

“I am a poor person, and my son is in this state,” said Nasser. “And they tell me he is malnourished, you can see how his condition is.”

The health care center found out about the infant recently through a local charity which provides aid to displaced in the area, said Dr. Ali Hajar, who oversees the malnutrition clinic at the center.

“His condition is very, very tragic. He suffers from acute malnutrition. His skin is stretching tightly over his bones,” the physician said.

The war, which wrecked the devastated country’s already fragile ability to feed its population, began late in 2014, when Houthi rebels swept down from the mountains and occupied northern Yemen and the capital, Sanaa. The Iran-backed rebels pushed the internationally recognized government of President Abed Rabbo Mansour Hadi to the south and eventually into exile.

As the rebels pushed farther south, Saudi Arabia and other Gulf Arab states, backed by the United States, formed a coalition to take on the Houthis, and intervened in Yemen in 2015, describing their involvement as an effort to stop Iran from gaining sway over the country.

The conflict has killed more than 100,000 people and created the world’s worst humanitarian disaster, with more than three million people internally displaced and two-thirds of the population reliant on food assistance for survival.

The situation in Yemen is only expected to get worse as donor countries recently cut back on aid amid the coronavirus pandemic and also due to concerns that the aid might not be reaching its intended recipients in territories controlled by the Houthis.

Some 24 million Yemeni people, which is 80 percent of the country’s entire population, require some form of assistance or protection, according to the UN Office for the Coordination of Humanitarian Affairs, or OCHA. And 75 percent of UN programs for the country, covering essentially every sector, from food to health care and nutrition, have already shut their doors or reduced operations.

The World Food Program had to cut rations in half and UN-funded health services have been reduced in nearly 200 hospitals nationwide.

Last week, UNICEF warned that unless $54.5 million are disbursed for health and nutrition aid by the end of August, more than 23,000 children will be at increased risk of dying because of acute malnutrition. It also said that five million others under the age of five will not have access to vaccines against deadly diseases.

“We cannot overstate the scale of this emergency as children,” said Sara Beysolow Nyanti, UNICEF representative to Yemen. “If we do not receive urgent funding, children will be pushed to the brink of starvation and many will die.”

Yemen has officially recorded more than 1,000 cases of COVID-19, the illness caused by the coronavirus, including 275 deaths. However, the actual tally is believed to be much higher as testing capabilities are severely limited, and the Houthi rebels have not revealed the number of infections in areas under their control.

“I don’t have anything to give him,” said Nasser, the fisherman, looking in despair at his boy, little Issa, and the child’s large, wide-open eyes.

Image: In this Sunday, June 14, 2020 photo, seven-month-old Issa Ibrahim Nasser is brought to a clinic in Deir Al-Hassi, At seven months old, Issa weighs only three kilos. Like him, hundreds of children suffer from acute severe malnutrition because of poverty and grinding conflict. Yemen. (AP Photo/Issa Al-Rajhi)

UNICEF: Millions of Yemeni children may starve amid pandemic

UN aid chief: Yemen will fall off a cliff if no new funds