A funeral procession was held on Thursday for Olha Sukhenko, a Ukrainian village mayor who was found murdered after Russian forces left the Kyiv region.

Sukhenko was mayor of Motyzhyn, to the east of the capital, when she was killed in the custody of Russian forces, according to Ukrainian Deputy Prime Minister Iryna Vereshchuk.

Vadym Tokar, the head of the Makariv village council, posted video on Telegram of local residents marching behind a van carrying the coffins of Sukhenko and her husband and son, who were also killed, according to Tokar.

“In Motyzhyn, they said goodbye to

“In Motyzhyn, they said goodbye to Olha Sukhenko, her husband and son, who were tortured and killed by the Russian occupiers,” Tokar said, adding that about 300 people came to pay their respects by following the coffins and kneeling on the road.

Zelensky says Ukraine is preparing “reforms” ahead of talks with EU 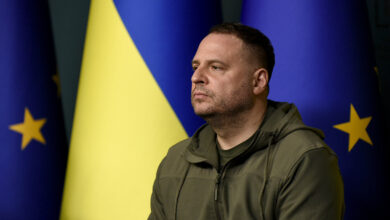