Hong Kong students plan to occupy roads surrounding the city's British consulate in anger at a lack of support from London for their pro-democracy movement, as authorities ramp up pressure on protesters to go home.

The city's government has urged protesters to leave the main rally sites after more than six weeks of demonstrations that have brought parts of Hong Kong to a standstill.

Police were authorised Monday to back up bailiffs charged with clearing barricades.

They are expected to start the operation in the next few days, with thousands of officers put on standby over the weekend according to local media.

But seemingly undaunted, activists have put up large posters around the protest areas announcing the consulate occupation on November 21 and a Facebook page for the event has more than 700 likes.

Organisers say they want to show their anger at Britain for not standing up to China over "breaches" of the agreement the two countries made before Hong Kong was handed back to China by Britain in 1997, designed to protect Hong Kong's social systems and way of life.

"We are angry at the way that the British government has for many years denied that China has actually breached the declaration by interfering with Hong Kong politics," Anna-Kate Choi, the coordinator for the Occupy British Consulate group told AFP.

"They have the responsibility to make sure that the joint declaration has been implemented properly and that democracy and the high degree of autonomy of Hong Kong has been protected," Choi said.

She hoped for a turnout of hundreds "maybe even thousands", with secondary school pupils spearheading the protest.

Britain and China are signatories of the 1984 Sino-British Joint Declaration, an agreement that enshrines the "one country, two systems" principle and is meant to preserve Hong Kong's capitalist system and way of life until 2047.

It states that: "The current social and economic systems in Hong Kong will remain unchanged, and so will the lifestyle."

British Prime Minister David Cameron said he was "deeply concerned" about escalating protests in the former British colony after police used tear gas on protesters at the end of September.

But activists feel that Britain is turning a blind eye and that China is eroding Hong Kong's freedoms.

Residents enjoy rights not seen on the mainland, including freedom of expression and assembly.

However there are signs some of those rights are being curtailed, including physical and cyber-attacks on Hong Kong-based journalists critical of Beijing.

Activists say a policy "white paper", published by China's cabinet in June, backtracked on the joint declaration by warning the city not to overstep the boundaries of its autonomy.

Protesters are demanding fully free leadership elections for the semi-autonomous city in 2017. But Beijing has refused to back down on its insistence that candidates must be vetted by a loyalist committee.

The United States has no role in pro-democracy protests in Hong Kong, President Barack Obama said in Beijing on Wednesday, despite Chinese accusations that foreign forces are involved.

"I was unequivocal in saying that the US had no involvement in fostering the protests that took place in Hong Kong," Obama told reporters at a joint press conference.

"These are issues ultimately for the people of Hong Kong and China to decide," he said. 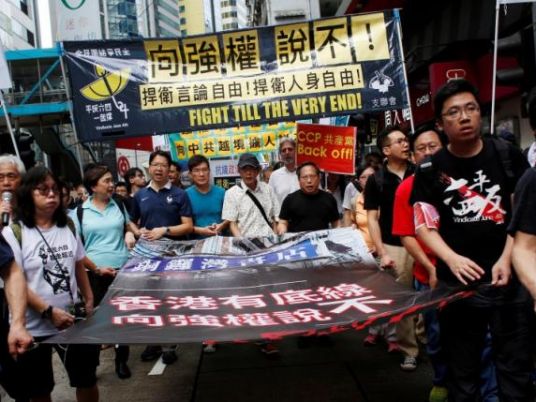