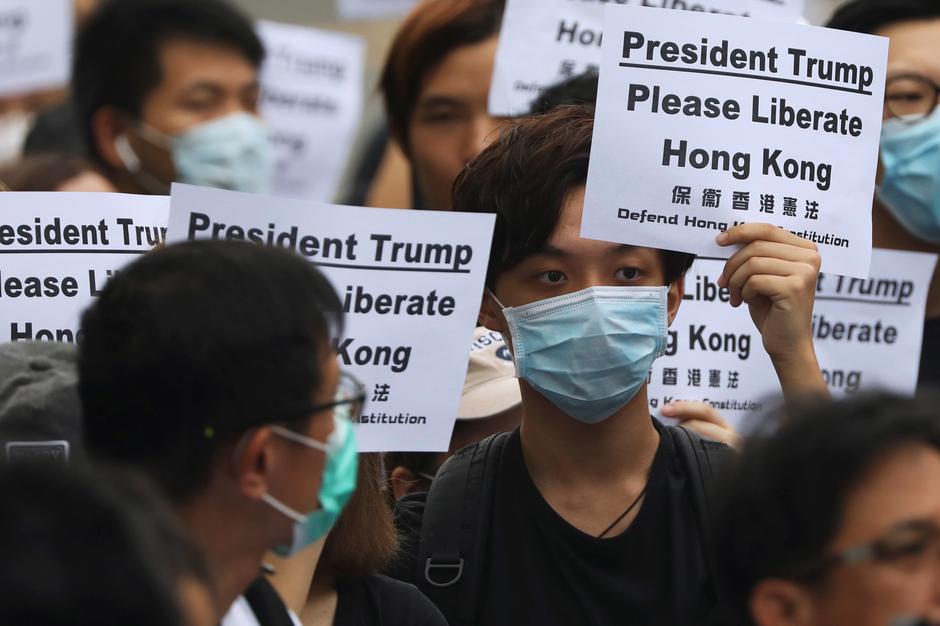 HONG KONG (Reuters) – More than one thousand protesters marched to major foreign consulates in Hong Kong on Wednesday, urging leaders at the upcoming G20 summit to support the full scrapping of a controversial extradition bill.

Holding placards that read “Please Liberate Hong Kong” in multiple languages including Russian and German, the demonstrators, some wearing masks, marched to consulates of nations represented at the Group of 20 major economies summit in Japan this weekend.

Millions of people in Hong Kong have protested in recent weeks against an extradition bill that would have allowed individuals, including foreigners, to be extradited to mainland China to face trial in courts controlled by the Communist Party.

Hong Kong’s Beijing-appointed leader Carrie Lam, eventually caved in after some of the worst violence seen in decades on the city’s streets, with police firing tear gas and rubber bullets.

But Lam stopped short of protesters’ demands to scrap the bill altogether, saying it would be suspended indefinitely.

“As long as the government doesn’t withdraw the bill, and they refuse to respond, then we will keep on fighting,” said Aslee Tam, 19, a university student who joined the march.

“We want to make some noise during the G20 meeting, to let other countries discuss the issues in Hong Kong,” she added.

Hong Kong returned to Chinese rule in 1997, since when it has been governed under a “one country, two systems” formula that allows freedoms not enjoyed in mainland China, including freedom to protest and an independent judiciary.

But many accuse China of increased meddling over the years, obstructing democratic reforms, interfering with elections and of being behind the disappearance of five Hong Kong-based booksellers who specialized in works critical of Chinese leaders.

At the US consulate, protesters handed over a petition asking President Donald Trump to “Back Hong Kong at the G20 Summit”. They urged Trump in his talks with Chinese President Xi Jinping to back a full withdrawal of the bill and an independent probe into the actions of Hong Kong police against protesters.

The protesters, some wearing “Liberate Hong Kong” T-shirts, also marched to the British consulate where a man held up a sign: “Free HK from China colonization”.

Britain’s Foreign Secretary Jeremy Hunt told parliament on Tuesday that London would ban sales of tear gas to Hong Kong and called for an independent probe into the recent violence – a gesture that was welcomed by some in the crowd.

“Britain has repeatedly made irresponsible remarks and flagrantly interfered with regards to Hong Kong. China expresses its strong dissatisfaction and resolute opposition to this,” he told a daily news briefing.

The protesters divided into three groups and marched peacefully through the city to 16 diplomatic missions, including the Office of the European Union and the consulates of Argentina, Australia, Canada, Italy, Japan, South Africa, South Korea, Russia and Turkey amongst others.

“This is the first time so many march to so many consulates to express a single view,” said one organizer surnamed Lau.

The protesters carried a manifesto that said China’s promise to allow the city a high degree of autonomy after the 1997 handover is now under threat.

Raising Hong Kong’s extradition saga at the summit could embarrass Xi at a delicate time of rising trade tensions with the United States, and put more pressure on Hong Kong’s leader amid reports that Beijing has serious doubts about Lam’s capabilities.

An assistant Chinese Foreign Minister Zhang Jun said this week that China won’t allow Hong Kong to be discussed at the G20 in the Japanese city of Osaka.

Hong Kong activists have raised more than HK$5 million ($640,606) in a crowdfunding campaign to take out newspaper ads in major foreign media like the New York Times during the summit to stoke global attention..

Some Hong Kong activists have also traveled to Osaka.

HK leader apologizes for extradition crisis, vows to stay on