Facebook Twitter LinkedIn
Has any garment enjoyed a more impressive rise than the once-humble sneaker? From fitness shoe to high-fashion staple, the sneaker's ascent reflects some of the most significant pop-culture developments of the last few decades — from the impact of advertising and mass production, to the influence of hip-hop and the NBA.
From July 10, visitors will be able to trace this history at The Rise of Sneaker Culture, a traveling exhibition at the Brooklyn Museum exploring its history and cultural significance.
But Elizabeth Semmelhack, senior curator of the originating exhibition at Toronto's Bata Shoe Museum and author of the accompanying book from Rizzoli, says that its history is more complex than we might think. "When the first sneakers debuted [in the 1800's], they were themselves luxury items," she says, citing the high price of rubber and the working class's lack of leisure time. "We're kind of coming full circle in a weird way."
So, how exactly have we ended up in an age of die-hard Nike addicts and Parisian designer kicks? 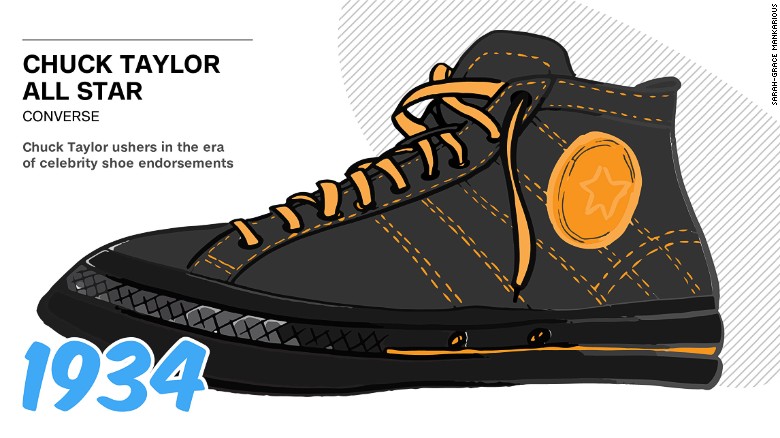 Chuck Taylor ushers in the era of celebrity shoe endorsements
After the devastation of WWI, governments had to confront more than just the colossal loss of life. The war had demonstrated how physically unprepared their populations were for battle, prompting a large-scale push for fitness.
As people rushed to the gym, opportunistic industrialists started mass-producing sneakers, bringing down prices and democratizing what had once been the domain of the wealthy.
To set themselves apart, the Converse Rubber Shoe Company drafted basketball player Chuck Taylor to improve their basketball shoe — the All-Star — in 1921.
"He wasn't Michael Jordan by any stretch of the imagination, but what he gave to the brand was an authenticity," Semmelhack says. "It was a means of endorsing the athletic potential and athletic promise of the shoe." 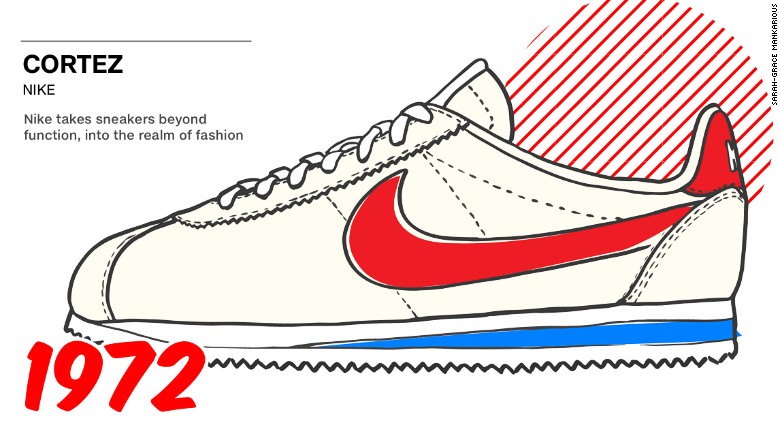 Nike takes sneakers beyond function, into the realm of fashion
By the end of WWII, the sneaker had lost what remained of its Victorian luxury associations. Everyone from school kids to workmen wore them for comfort, not status. But an uptake in conspicuous consumption and personal fitness fads in the 1970's suggested the time was right for a sneaker renaissance.
Sensing a shift, newcomer Nike created the ideal shoe for the Me Generation: the Nike Cortez. Available in a number of bright colorways with an immediately identifiable logo, it was designed for those who wished to stand out on the dance floor track as well as the running track.
"The sneaker is segueing away from simply being a fitness shoe to being a fashion shoe," Semmelhack says. 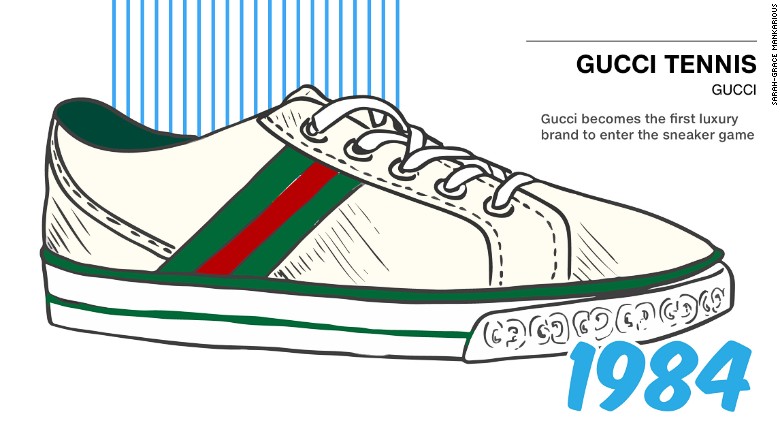 Gucci becomes the first luxury brand to enter the sneaker game
Traditional sneaker companies weren't the only ones capitalizing on the public's growing penchant for sneakers. In 1984, Gucci released an Italian-made tennis shoe with the brand's signature green and red stripes on the heel, and "Gucci" printed on the tongue.
"Their participation in the sneaker game was very prescient. They were getting in there much earlier than any of the other brands we see doing it now," says Semmelhack. 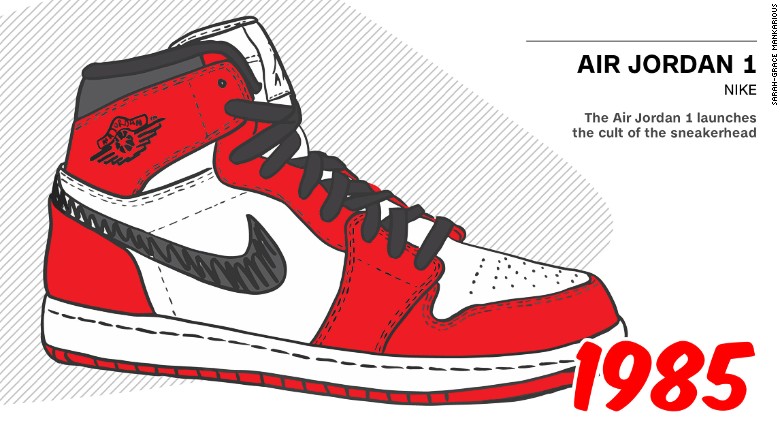 The Air Jordan 1 creates the cult of the sneakerhead
Michael Jordan was just a rookie at the time (granted: one with an Olympic gold medal under his belt), but that didn't stop Nike from signing him for a five-year endorsement deal in 1984. With that contract came an exclusive new shoe for him to wear and promote: The Air Jordan.
The red-and-black sneakers (to match Jordan's Chicago Bulls uniform) were initially banned by NBA commissioner David Stern, who'd mandated that shoes worn on the court had to be majority white. Jordan famously wore them anyway, and Nike paid the US$5000 fine after each game.
"He becomes an icon of individuality, of bucking the trend, and the shoes that he wears suddenly become something that every guy wants to have," Semmelhack says.
The shoe's public release in 1985 is widely considered the catalyst for modern sneakerhead culture — a community of sneaker collectors and admirers who follow new releases with a dedication usually reserved for classic cars or Swiss watches. 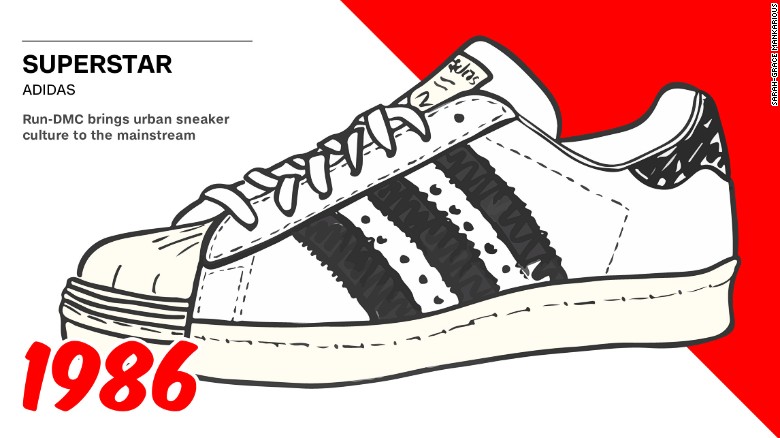 Run-DMC brings urban sneaker culture to the mainstream
No one embodied the early hip-hop aesthetic as fully as rapper-DJ trio Run-DMC, whose signature look — rope chains, Adidas tracksuits and shell-toe Adidas Superstars — is now emblematic.
"They go on to disseminate this urban style to a much wider audience, and the Superstar becomes this extremely graphic, very visual signifier of urban fashion," Semmelhack says.
The release of 1986's "My Adidas" — an ode to a favorite shoe and refutation of hip-hop stereotypes — led to an endorsement deal with the brand, making Run-DMC the first of what would be many musicians to ink deals with sneaker brands. 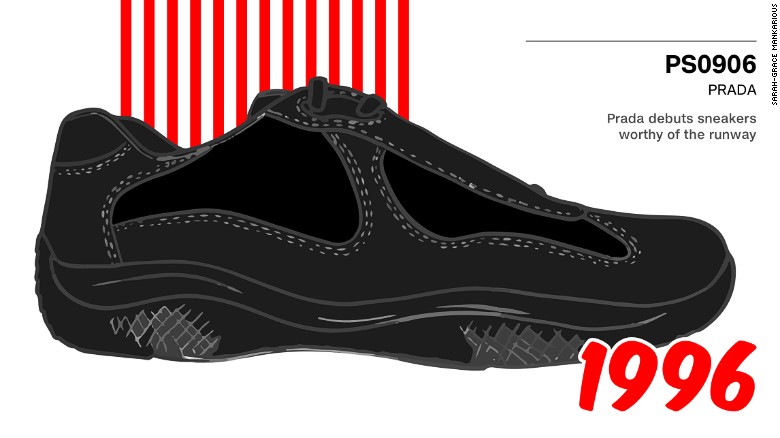 Prada debuts sneakers worthy of the runway
Perennial provocateur Miuccia Prada started the trend for high-end designer sneakers. Originally intended as a yachting shoe (it was designed for the Luna Rossa sailing team to wear in the America's Cup), the streamlined Prada PS0906 openly prioritized aesthetics over athletics.
"It shows a move away from a shoe designed for elite athletic purpose or even playground purpose, and was shifting the sneaker design toward an expression of style," Semmelhack says. 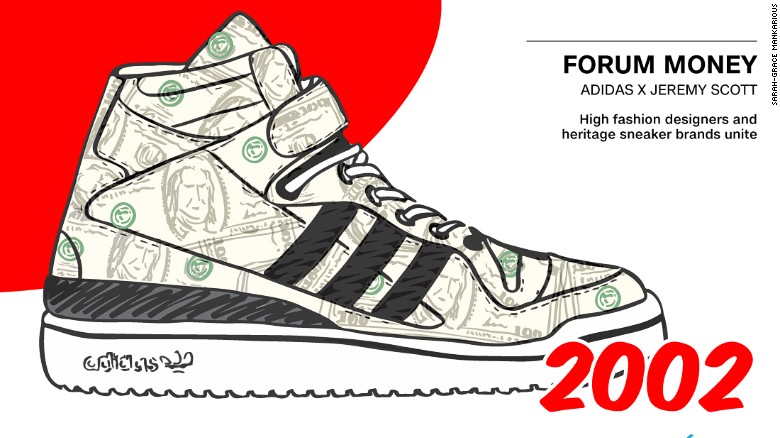 High fashion designers and heritage sneaker brands unite
Adidas broke new ground when they teamed up with designers Yohji Yamamoto and Jeremy Scott in 2002. By having each designer reinterpret two of the brand's earlier styles, they brought together sneaker culture and high fashion in a way that was hitherto unheard of.
The results: shoes that retained the functionality and shape of the originals, but still rang true to the designers' distinctive aesthetics: Yamamoto's architectural, forward-looking design sense, and Scott's humor and outlandishness (his Forum was covered in dollar bills with his own face in place of George Washington's). Both continue to collaborate with Adidas today. 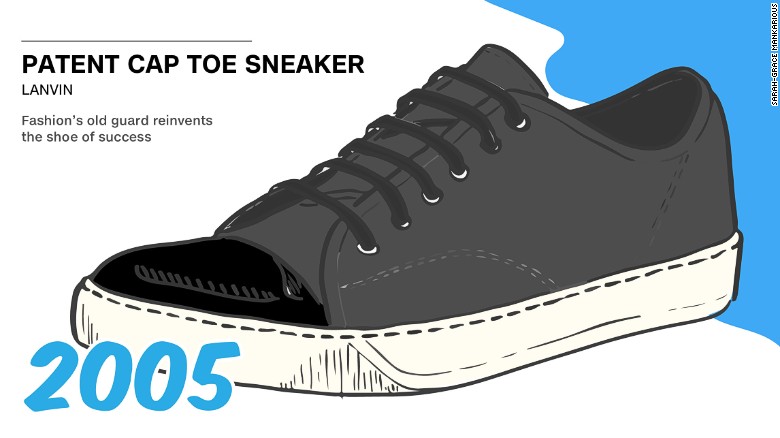 Fashion's old guard reinvents the shoe of success
The noughties also bore witness to the transformation of business attire. The dot-com boom and emerging start-up culture, along with growing entrepreneurship among hip-hop stars and elite athletes, had produced a generation of men who challenged conventional notions of success, and the associated sartorial codes.
To cater to this more casual corporate cohort, traditional fashion houses like Lanvin met them half-way, imbuing the sneaker with their established elegance and craftsmanship. 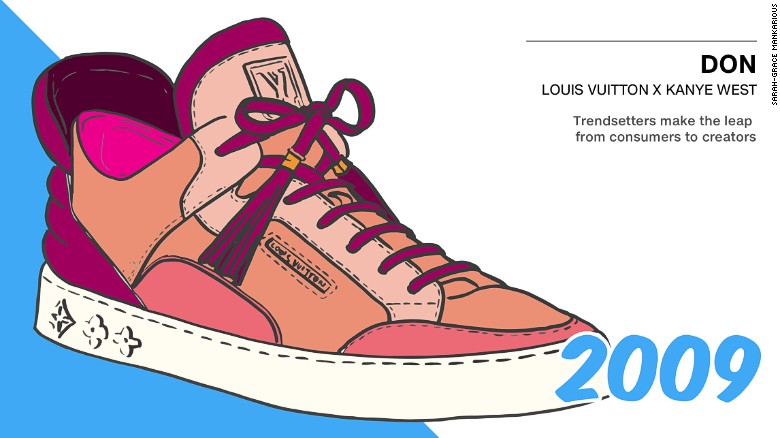 Trendsetters make the leap from consumers to creators
Louis Vuitton brought the luxury sneaker game to another level when they joined forces with rapper and street style icon Kanye West. Instead of creating their own sneaker and hiring West to star in the campaign, the Parisian fashion house collaborated with him on three pairs. The collection sold out almost instantly, even though pairs went for upwards of US$1000.
"Kanye West was an active participant in the creation of this collection at Louis Vuitton," Semmelhack says. "He represents a new image of male success that involves access to these luxury brands. But it's not simply being a consumer, it's being a creator." 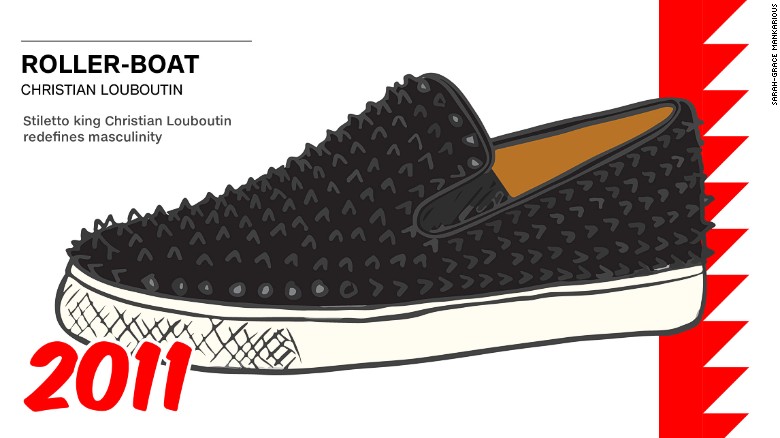 Stiletto king Christian Louboutin redefines masculinity
In 2011, footwear designer Christian Louboutin — renowned the world over for his red-soled high heels — released his first full men's collection. The jewel of his new empire: the studded Roller-Boat sneaker, a reinterpretation of his earlier Rollerboy loafer, complete with red rubber sole. They were an immediate hit.
"This is one of the first times when a brand that's so female identified is now eagerly embraced and worn by men," Semmelhack says. "Sneaker culture is suggesting a huge shift in constructions of masculinity … They allow men to participate in fashion in a way that does not at all call into question their masculinity, so men are able to partake in the luxury associations that are made between shoes and fashion." 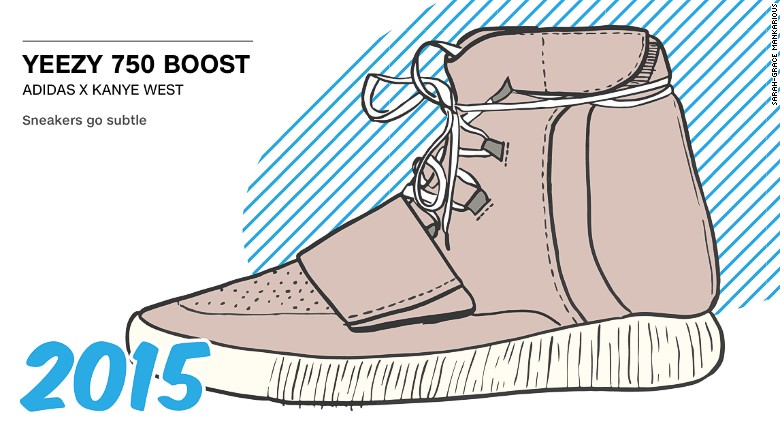 Sneakers go under/overstated?
Semmelhack is divided. The popularity of the understated Yeezy 750 Boost, designed by Kanye West for Adidas, embodies a concerted return to the restrained elegance of classic menswear. But for every sneaker that embraces tradition, there are many others flouting it in increasingly extreme ways.
"Men are very loath to push the envelope in other aspect of their attire, but sneakers can be the most eye-catching colorway, large, graphically strong," she says. 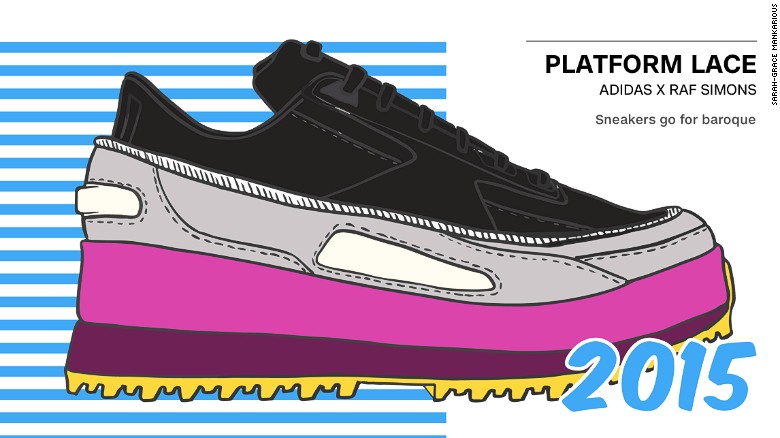 To Semmelhack, no shoe represents this schism more aptly than the baroque platform Christian Dior creative director Raf Simons released with Adidas.
"I think of it as a transformer shoe: it's a business brogue in the midst of being transformed into a sneaker," she says. "It just speaks to what is a very transformative moment in men's fashion."
The Rise of Sneaker Culture is on at the Brooklyn Museum from July 10-October 4, 2015.
Tags
chic high fashion High-tops history Nike sneakers street