The scene is an empty living room with a telephone sitting idle. The phone starts to ring and the answering machine picks up. “Hello, this is the Israeli Defense Forces,” says a calm voice in a matter of fact tone. “We are going to shell your home. You have ten minutes to evacuate. Thank you.”

This short clip is one of 12 included in the Visit Gaza exhibition held at Rawabet Theater. The exhibition itself is composed of five different sections. In this section, titled “Gaza Winter,” short video clips deal in one form or another with the bombardment of Gaza during the winter of 2008-2009.

The idea for Gaza Winter began with an international call for short films on Gaza during the bombardment. From the overwhelming responses received, the selected films on show bring together directors from Gaza, Ramallah, the Golan Heights, Spain, Iceland, Belgium, London, Jordan, and the US.

Some are poignant and some offer a different perspective–reactions in Iceland to the bombardment, for instance–and a sense of thoughtfulness. The acting, however, can seem forced at times.

Outside the video installation, visitors are met with “The bright side of the moon,” where they are given a detailed tourist map of Gaza and a small pamphlet that asks, “Have you always dreamt of visiting the heavenly beaches of Gaza?”

The question, sarcastic as it’s intended to be, draws attention to the complete disappearance of Gaza from any even remote holiday destination list–despite it being closer to Cairenes than Sharm el-Sheikh. The text, written by Mohammed Abdallah, goes on to point out that there are virtually no images of Gaza beyond the usual piles of rubble, bomb shells and poverty. “The city’s memory and the BBC archives are one and the same,” Abdallah writes.

Moving further into the exhibition, one is met with a photographic installation titled “Empty Spaces and Erosion Factors” by Palestinian artist Hazem Harb. The ten photographs depict nothing of Palestine per se, and instead convey dark, sooty images of what appears to be an eerie landscape. Some are apparently close up shots of carbon dioxide fused with the marble used to build the Monument to the Unknown Soldier in Rome’s Piazza Venezia.

One interesting installation is a large collection of life-sized cardboard cut-outs depicting the Samouni family. Twenty nine of the family’s members were killed north of Gaza City after being herded into a house by Israeli forces that was shelled the next day. The huddled and featureless 2D cut-outs of the children and adults take up a large, dark corner of the exhibition, and have a haunting effect, all the more so when you read the description.

The exhibition also features a slideshow of photographs by Palestinean artist Shareef Sarhan that portrays his vision of the different aspects of life in Gaza. And the exhibition’s opening night on Sunday witnessed the novel presentation of a “resistaurant”–or rather, a variety of Palestinian dishes for those who attended.

Overall, while any art exhibition dealing with Gaza will inevitably have the anticipated “look at those poor Gazans” vibe, Visit Gaza is refreshing in that it weaves a little sarcastic humor into an issue that is all too often only doom and gloom. 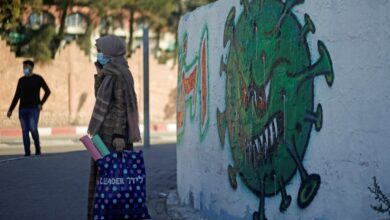