Facebook Twitter LinkedIn
More than half a million children in Yemen face life-threatening malnutrition as a risk of famine grows, a senior official of the U.N. Children's Fund (UNICEF) said on Friday.
The figure, a three-fold jump since fighting erupted in March, reflects depleted food stocks compounded by a failing health system unable to care for hungry children or vaccinate them against disease, said Afshan Khan, director of UNICEF emergency programmes worldwide.
"We are facing the potential of a huge humanitarian catastrophe … The levels of malnutrition that are being reported for children are extremely critical," Khan told Reuters, saying more data and hard evidence was needed to declare a famine.
"A nutritional survey will be done at the end of October. How close are we to a famine declaration? We see some zones that are worse than others," she said.
In addition to 537,000 children aged under five at risk of severe acute malnutrition, marked by visible wasting of their bodies, 1.3 million are moderately malnourished, according to the latest U.N. figures.
Fewer than one in five therapeutic feeding centres across Yemen are functional, Khan said. UNICEF operates 43 mobile teams that screen children for malnutrition but areas such as the al Qaeda-held eastern province of Hadramawt are inaccessible.
Saudi Arabia has led an Arab military intervention against Houthi fighters since March 26 to restore the exiled Yemeni government and fend off what it sees as the creeping influence of the Shi'ite Muslim group's main ally, Iran.
At least 5,400 people have been killed in the conflict in the Arab world's poorest country where an estimated 10 percent of the 23 million population are now internally displaced. The death toll includes at least 502 children, UNICEF says.
Yemen, which imported 90 percent of its food before the crisis, is subject to a Saudi-led blockade imposed on commercial vessels, which are inspected by a U.N. verification mechanism.
"We are allowed small passages of goods where the papers are clear," Khan said. "We have been unable to sufficiently replenish medical supplies."
The lack of fuel imports is preventing mills from grinding grain, she said.
"Humanitarian access is getting more and more difficult … We hope fuel imports are restored so the cold chain (for vaccines) is re-established and sufficient fuel is available for running water treatment," she said.
Of 2.7 million children targeted for vaccination against measles and polio, only 676,000 have been reached, she added.
Tags
Yemen children's hospital 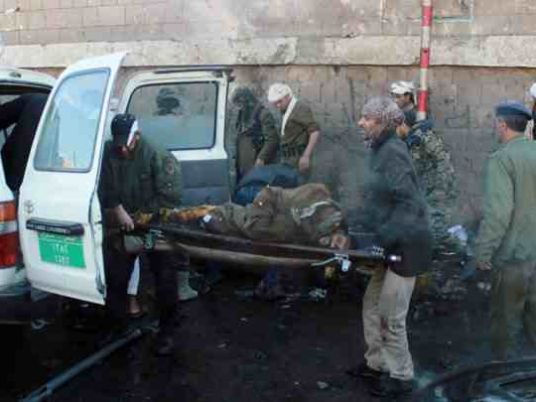