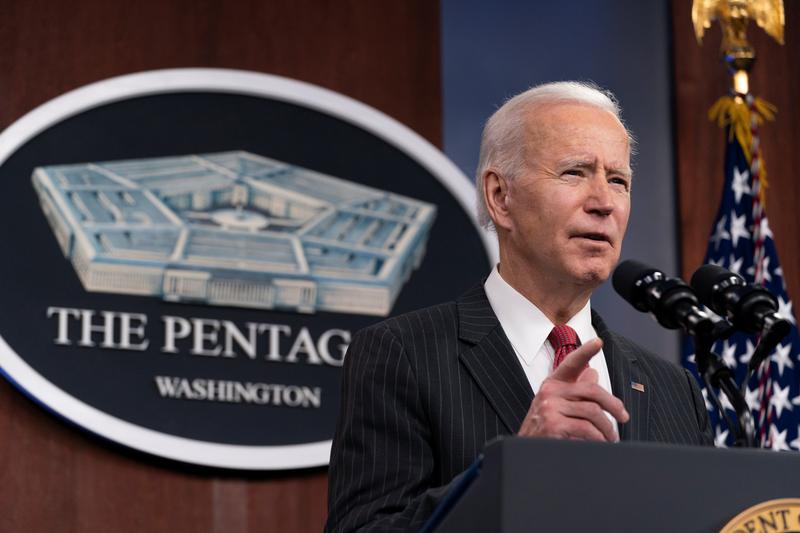 US President Joe Biden on Thursday announced six executive actions that his administration will take in an effort to fight the “epidemic” of gun violence that has gripped the country for decades.

Biden called gun violence a “national health crisis” that cost the United States not only the lives and futures of its citizens but also an estimated $280 billion (€235 billion) each year.

“This is an epidemic, for God’s sake, and it has to stop,” Biden said at an outdoor press conference at the White House.

What executive actions did Biden announce on guns?

Biden thanked the survivors and families of gun violence victims present on Thursday for the courage they showed in coming and promised action. He then told those present that his responsibility as president required him to act and that he would do everything in his power to tackle the problem, even if Congress wouldn’t.

The president then introduced a list of six executive actions that he would sign immediately. The actions, he said, would address the following:

Cracking down on ‘ghost guns’

Biden said he would require individuals purchasing home-assembly gun kits to undergo background checks as well as requiring manufacturers to mark key components with serial numbers so that these could be traced — currently, neither are required by law.

The last time such a report was compiled was some 20 years ago.

Would require individuals purchasing modifications to make a gun more lethal — such as stabilizing braces for handguns like the one used in a Colorado mass shooting last week — to submit their names to authorities before being allowed to procure such items.

These enable courts to take away guns from unstable individuals if there are clear grounds for doing so. Biden said the laws would help prevent suicides, protect women against domestic violence and stop mass shootings. He called for a national Red Flag Law and noted that the Department of Justice was preparing templates for states to fashion their own laws after.

Biden pointed out the toll guns take on urban communities of color, noting that homicide is the leading cause of death for Black boys and men between the ages 15-34 in the US. Beyond the psychological damage to those communities, he also emphasized the sheer monetary cost of gun violence, saying it costs taxpayers an estimated $280 million (€235 million) annually in hospital costs, physical therapy, trauma counseling, legal fees, prison costs and loss of productivity. He claimed that affected communities could be helped profoundly by investing a fraction of that cost into developing safe communities that would provide economic opportunity.

Biden on Thursday announced that he would nominate gun control advocate David Chipman to head the Bureau of Alcohol, Tobacco, Firearms and Explosives (ATF), which has not had a permanent director since 2015.

Biden said the most important aspect of his job as president was to “protect the American people,” and he called on Congress to help him do so. Still, he bemoaned the fact that politicians “have offered plenty of thoughts and prayers but have failed to introduce a single law to reduce gun violence” in the face of the national epidemic.

He called on the Senate to act and approve House bills designed to close background check loopholes for gun show or online purchases; the so-called “Charleston loophole” that allows the sale of guns to individuals whose FBI background checks have not been completed within three days — the name refers to a loophole that allowed a white supremacist to purchase the weapon he used to kill nine Black churchgoers in Charleston, South Carolina, in 2015; and to reauthorize the Violence Against Women Act that keeps guns out the hands of boyfriends and stalkers found by courts to be abusers that present a continuing violent threat.

‘Long past time that we act’

The president went further still, calling for a renewed ban on assault rifles and high-capacity magazines, saying, “We got it done once, we should do it again.” Here, too, Biden said most Americans would agree that “nobody needs” a weapon of war with 100 rounds of ammo and explained that the number of mass shootings in the US went down significantly for the 10 years the assault weapons ban was law.

Lastly, the president said gun manufacturers should be stripped of the immunity they currently receive from Congress. He said it was hard to imagine why the billion-dollar industry should be exempt from being sued, asking those present to imagine what it would have meant if the tobacco industry, for instance, has enjoyed similar immunity. He ended his remarks on the concrete steps he outlined by saying, “If the Lord came down and told me pick one thing on your list, I’d say ‘Gimme that one.'”

Plea to end the ‘blemish on our character as a nation’

In closing, Biden reminded Americans that the conversation would be difficult but that his administration’s actions were entirely consistent with the right to bear arms guaranteed in the Second Amendment of the US Constitution.

Before again thanking those present in the Rose Garden, he sought to stir hope in them, promising: “No matter how long it takes, we’re gonna get these passed. We’re not gonna give up,” declaring that it was not only imperative but also “a chance to show the world that democracy works.”

Biden makes all adults eligible for a vaccine on April 19