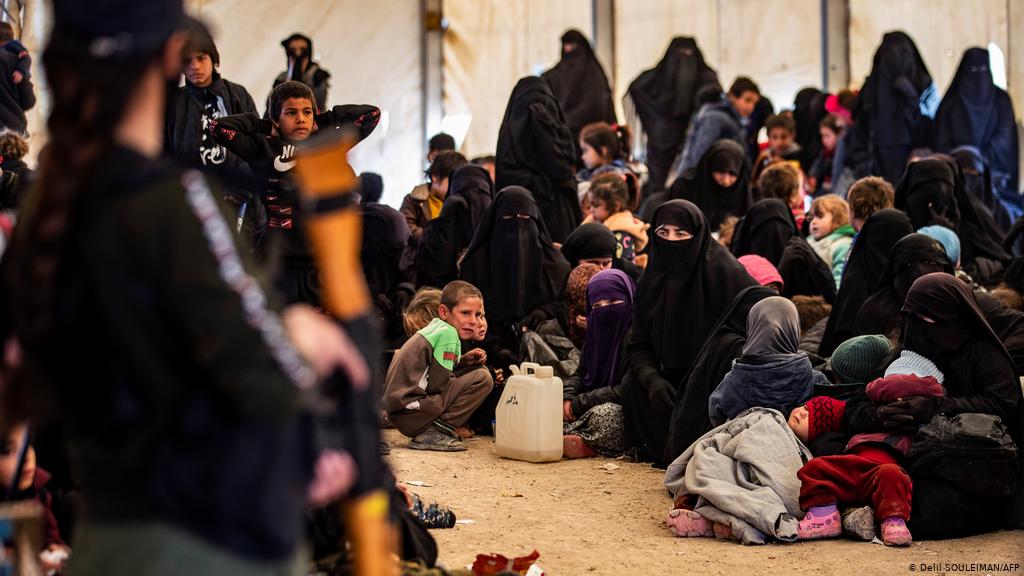 Humanitarian reasons have been cited for flying home several ‘IS’ brides and children from internment in Syria. At the height of the civil war, the women allegedly traveled to join the Islamist militia.

German Foreign Minister Heiko Maas on Sunday said he was “relieved” that a “humanitarian” recovery operation had brought home 18 children and five “Islamic State” (IS) brides from Kurdish-run internment camps in northeastern Syria.

One of three German women brought back, identified in reports as Leonore M., 21, from Saxony-Anhalt state, was arrested a day earlier on arrival in Frankfurt airport, on charges including terror organization membership, said federal prosecutors.

German public broadcaster SWR said the group, reportedly comprising five women and 18 children, including seven orphans, were handed over to a Foreign Office delegation by Kurdish envoys at Qamishli in northeastern Syria.

SWR said they had been held at Roj and al-Hol, two Kurdish-run internment camps holding tens of thousands of detainees since the military defeat of IS by Kurdish forces backed by a multinational US-led alliance in late 2018, early 2019.

Germany’s Foreign Office did not mention the women’s alleged IS backgrounds but said the mission involved “humanitarian cases, especially orphans and children with illnesses — cases in which departure was particularly urgent.”

Maas said the mission had gone ahead in “precarious” circumstances after “months of intensive preparations and coordination.”

Thanks also went, he said, “to our Finnish partners, with whom we jointly carried out this operation.”

The relocation of the German nationals was the first direct mission involving the Foreign Office, the German tabloid Bild noted, headlining the recovery as a “secret mission shortly before Christmas.”

Remaining in Syria, according to the newspaper, were nearly 70 adult Germans in Kurdish captivity along with 150 children of German parents.

The German women, identified only by their first names also include Merve A., 24, from Hamburg and Yasmin A. from Bonn.

Der Spiegel said Merve followed her then-18-year-old friend to Syria, who was later killed as an IS combatant.

Leonora went to Raqqa, then a IS stronghold, and became the third wife of Martin L., a German in IS’ notorious intelligence network.

For a period, reported Der Spiegel, she had allegedly held a Yazidi woman and two children as slaves in her apartment until selling them on.

Kurdish forces had taken her prisoner in January 2019 as she fled the battle for Baghouz — the last IS stronghold in eastern Syria — taken by Kurdish-led Syrian Democratic Forces (SDF) militias, backed by a US-led multinational alliance.

The reluctance of many countries, including Germany, to take back citizens deemed radicalized IS-associates has often been challenged by family lawyers, acting for grandparents, and aid groups such as the Red Cross.

They argued that unwitting child nationals must be extracted from “horrifying” conditions in internment camps along the Syrian-Iraqi border.

The tabloid Bild noted that Chancellor Angela Merkel’s government had previously rejected direct repatriations, but reported on a separate humanitarian mission, which took place over the summer.

“A grandmother living in Germany recognized her grandson,” recalled the newspaper, “and in August, the Foreign Office finally brought the three orphans and the seriously ill baby to Germany.”

Years after ISIS, Iraqis forced out of camps into uncertain future

Women's rights in Islam: Fighting for equality before the law