Hundreds of thousands descended on the German capital Saturday for festivities to mark the Berlin Wall's fall 25 years ago, stirring emotions and bringing memories flooding back of its joyous toppling.

In bright but chilly autumnal sunshine, German and foreign visitors flocked to symbolic points along the Wall's route ahead of the anniversary Sunday of the peaceful revolution in 1989 that led to the border's opening.

People posed for photos in front of the few remaining graffiti-daubed slabs of the Wall, or read information boards about the grim reality of life under Berlin's 28-year division.

Others admired a striking art installation of almost 7,000 gently swaying white balloons, pegged to the ground and winding 15 kilometres (nine miles) along the Wall's route.

Many watched onstage rehearsals at the iconic Brandenburg Gate, resplendent against the blue sky, where rock stars and freedom icons will join a massive open-air party in Sunday's culmination of three days of festivities.

At Potsdamer Platz, once cleaved in two by the detested Berlin Wall and now a bustling junction with shiny modern tower blocks, a small crowd watched East German demonstrators in video images chant: "We are the people!".

"I cried. It was so dramatic," Italian tourist Juliane Pellegrini, 60, a school headmistress from South Tyrol, recalled, saying she had followed events on television the fateful night the Wall came down.

Twenty-five years later in the city where it took place, she said she felt emotional all over again. "It's the history of central Europe," she told AFP.

Sixty-eight-year-old Geraldine Bray, visiting from Britain, also said the memory of November 9, 1989 had stayed with her.

"I was at home making the evening meal and put on the news… it was very, very memorable."

Chancellor Angela Merkel, who grew up in communist East Germany, said in her weekly podcast Saturday that the reunified capital of Berlin had become "almost a symbol of Europe's unification after the Cold War".

Berlin Mayor Klaus Wowereit said the landmark event had stirred "so much emotion".

"It fills your heart with joy and we can be quite proud of that," he said at a regional Social Democratic Party meeting.

French President Francois Hollande said on Bild's online news site that 25 years on, the Wall's fall was a "joint legacy" that obliged France, Germany and Europe to step up, including outside of the region in places such as Syria or Iraq.

The last Soviet leader, Mikhail Gorbachev, whose "perestroika" and "glasnost" reforms helped pave the way for the Wall's fall, called it a celebratory day "for all peoples of Europe and other continents".

His message together with others by past and present leading figures, pop stars such as U2's Bono, or film stars, were printed in an anniversary edition of Bild daily.

Sausage, beer and souvenir stands will likely face brisk business with more than one million visitors expected over the weekend, according to the tourism group Visit Berlin.

Merkel was due on Saturday to attend a memorial concert at Bertolt Brecht's historic Berliner Ensemble theatre and, on Sunday, she will open a major exhibition on the once divided Bernauer Strasse.

Gorbachev and former Polish president and freedom icon Lech Walesa, 71, are among those due on Sunday at the Brandenburg Gate, the symbol of German unity, for a show to include rock music and fireworks.

From there, the white balloons will begin to be released into the evening sky.

Thrown up in 1961, the Wall stretched 155 kilometres (96 miles) but today only around three kilometres of it still stands.

Manfred and Edna Tschepe, both 72, said they went to bed at their home in West Berlin on the night of November 9, 1989 before hearing the momentous news.

"Unfortunately we slept through it," Manfred, a retired engineer said, chuckling.

But when he emerged from the underground train station the next morning on his way to work, the street was packed with people, he said.

On hearing the Wall had gone, he thought "that can't be. It was so unlikely. I can't believe it." 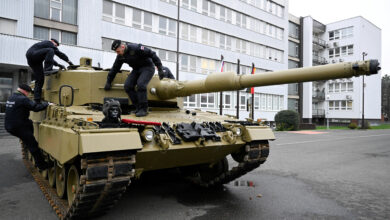 US “optimistic” that Germany will send Leopard tanks to Ukraine, defense official says 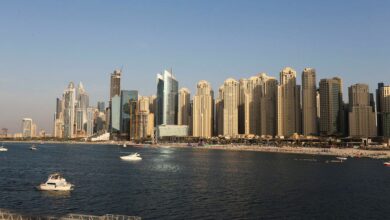