German lawmakers voted in favour of a third Greek bailout on Wednesday despite a record rebellion among Chancellor Angela Merkel's own conservatives that suggested she would struggle to return to parliament to seek any further aid for Athens.

Heeding a call from Finance Minister Wolfgang Schaeuble to give Greece the chance for a new start, conservative lawmakers rebelled in far fewer numbers than some in the party had predicted.

Thanks in part to the support of the Social Democrats, Merkel's junior coalition partner, and the opposition Greens, the package sailed through the Bundestag lower house with 454 lawmakers voting for, 113 against and 18 abstaining.

Resentment about sending more aid to Athens runs deep in Germany which has already contributed more than any other euro zone country to Greece's two previous bailouts since 2010. The third package is worth 86 billion euros (60.6 billion pounds).

"The problem isn't a lack of European solidarity but a lack of Greek efficiency," said conservative rebel Wolfgang Bosbach.

Reflecting popular misgivings and in a blow to Merkel's authority, more than a fifth of her conservative bloc refused to back the package.

A record 63 conservatives opposed it, three more than in last month's vote on starting negotiations with Greece. A further three abstained.

Schaeuble, Germany's toughest negotiator on the Greek bailout, led calls for a 'yes' vote in the parliamentary debate.

"Of course, after the experience of the last years and months there is no guarantee that everything will work and it is permissible to have doubts," said Schaeuble.

"But in view of the fact that the Greek parliament has already passed a large part of the measures it would be irresponsible to not use the opportunity for a new start in Greece," he said, making the case for the government.

Schaeuble had taken a tougher line than Merkel in bailout talks. Last month, he tabled the option of a 'timeout' from the euro zone for Greece, before then throwing his weight behind the

Germany's BDI industry association said the vote sent a signal to Greece that it could stay in the euro zone.

"The result … is an important interim step to ensure a return to a stable EU," said BDI chief Markus Kerber.

Merkel sat impassively during the debate on the bailout, as Greens co-leader Anton Hofreiter criticised her government for taking a hard line in talks on the new bailout.

"A German government leadership that acts like that damages the cohesion in Europe and thereby damages Germany by damaging our standing in Europe," Hofreiter said to applause.

In the Netherlands, Prime Minister Mark Rutte will face a no confidence motion on Wednesday, brought by his chief opposition rival over a broken campaign pledge not to provide additional emergency funding to Greece.

On Tuesday, the parliaments of Austria, Estonia and Spain voted to approve the bailout.

In Berlin, Schaeuble said Athens had clearly shifted ground in the last few weeks and was ready to reform.

He also reiterated the German view that it is imperative for the International Monetary Fund to stay on board. The IMF, however, says it won't unless Greece gets debt relief, while Germany is against cutting Greek debt.

"I am fairly confident that we (international creditors including the IMF) will reach a joint assessment of (Greece's) debt sustainability in October," said Schaeuble, reiterating that a debt haircut is not possible. 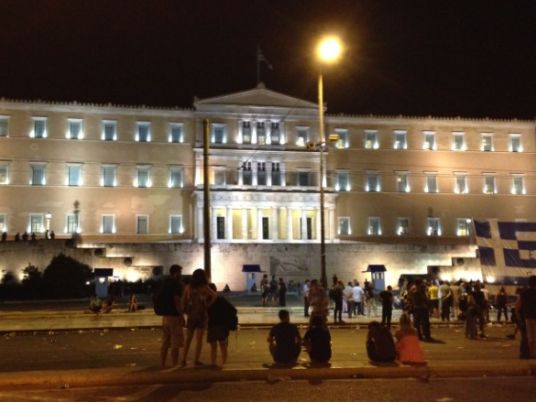