German Chancellor Olaf Scholz has appealed to Russian President Vladimir Putin to put an end to Russia’s invasion of Ukraine and “the senseless killing” taking place on the ground.

Speaking at a news conference in Berlin with Indian Prime Minister Narendra Modi on Monday, Scholz said that what “is important is achieving a better future together, not by waging wars against each other, but by making economic development and joint development possible.”

The German chancellor also called on Putin to “withdraw his troops from Ukraine,” adding that “borders should not be changed through the use of violence.” 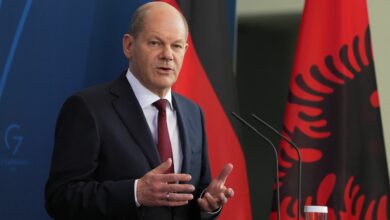