GAZA CITY, Gaza Strip (AP) — With a family of five, a two-story home and a pharmacy, Tamer al-Sultan had a life many in the besieged and impoverished Gaza Strip would envy, but he still felt trapped.

Fed up with the heavy-handed rule of Hamas, al-Sultan braved a treacherous journey in hopes of starting a new life in the West — only to die along the way. His death has drawn attention to the growing exodus of middle-class Gazans who can no longer bear to live in the isolated coastal territory.

It has also struck a nerve among many Palestinians because he appears to have fled persecution by Hamas, rather than the territory’s dire economic conditions following a 12-year blockade by Israel and Egypt, imposed when the Islamic militant group seized power.

Al-Sultan had vented about Hamas’ rule on social media and joined rare protests against a Hamas tax hike in March that were quickly and violently suppressed. Amin Abed, a friend who was arrested with al-Sultan on three occasions over the protests, said they were doused with cold water and beaten with plastic whips.

So al-Sultan left, following in the footsteps of thousands of other educated, middle-class Palestinians. The exodus has gathered pace in recent years, raising fears that Gaza could lose its doctors, lawyers, teachers and thinkers, putting the Palestinians’ dream of establishing a prosperous independent state in even greater peril.

He had planned to go to Belgium, where he had relatives, and bring his family after gaining refugee status. But his journey ended in Bosnia, where he died last month at the age of 38.

The exact cause of his death is not known. A purported hospital report from Bosnia circulated online says he had blood cancer, but the document has not been authenticated, and his family says he was in good health prior to the journey.

“He left Gaza because of the oppression,” his brother, Ramadan al-Sultan, said at the family’s home in the northern town of Beit Lahiya. Mourners at the funeral last month marched with the yellow flags of the rival Fatah movement and chanted “Out, Out!” when Hamas supporters showed up.

Palestinians have long seen their steadfastness in remaining on the land as their best hope for one day gaining independence from Israeli military rule, and both the Western-backed Palestinian Authority and its rival Hamas are opposed to emigration. Hamas cleric Salem Salama recently issued a fatwa, or religious edict, against emigration, saying “those who leave our homeland with the intention of not coming back deserve the wrath of God.”

There is no official count of the number of Palestinians who have emigrated from Gaza. Israel does not control Rafah, the main exit point, and Hamas and Egypt do not track such figures.

The U.N. Office for the Coordination of Humanitarian Affairs says 104,600 Palestinians left Gaza in 2018 and 2019 and 75,783 returned. But it’s not clear whether all of the roughly 30,000 net departures are emigrants. Many Gazans leave for extended periods to study or work abroad, with the intention of returning.

“It’s certain that thousands have taken advantage of the opportunity to exit Gaza in the hopes of finding a better future, away from the poverty and feeling of hopelessness at home,” says Gisha, an Israeli rights group that advocates for Palestinian freedom of movement.

There is no official resettlement program, so many Palestinians resort to informal routes. Al-Sultan took one of the more popular ones.

He left through the Rafah crossing, which Egypt has kept open on a regular basis since May 2018 after years of largely restricting travel to humanitarian cases. From there, al-Sultan went to Turkey, which welcomes Palestinian visitors. Then he took a rickety boat to Greece and worked his way up through the Balkans.

The International Organization for Migration says 1,177 Palestinians have crossed from Turkey to Greece by sea since the start of the year, the fourth most crossings by nationality. Over the past year, at least six Gazans have died on that route, including al-Sultan, according to local media reports.

While al-Sultan left to escape Hamas, many others have fled poverty and isolation. The blockade, along with Palestinian infighting , has devastated the local economy. More than half of Gaza’s labor force is unemployed and some 80 percent rely on food assistance. Daily power cuts last for several hours, and the tap water is undrinkable.

Mohammed Nassir graduated with a degree in information technology three years ago and opened a computer shop in his hometown of Beit Hanoun, but soon went out of business. He found a part-time job at an advertising company, but the firm shut down two months later.

Last week he waited outside the Rafah crossing, hoping his name would be called so he could board one of the three buses Egypt allows in every day.

“There is nothing left for us here,” he said. “No work, no present, no future, and above all, no hope.”

His uncle lives in Germany and is working on getting him a visa to travel there. Until then, he intends to sojourn in Egypt.

“If things don’t work out, I don’t know what I will do. But any place would be better than Gaza,” he said.

At the other end of the long and uncertain journey is Karim Nashwan, a prominent lawyer who left Gaza with his family in 2016 after his children graduated from university and now lives outside Brussels. He says he wishes he had left even earlier.

“My children decided to leave, and I agreed with them. They have no jobs, no safety, no future and no life in Gaza,” he said in a phone interview.

His wife and five children risked everything to travel the Turkey-Greece route before eventually flying onward to Belgium. He was able to join them later by traveling to Belgium legally under a family reunification program.

“The children learned the language and are integrating in the society,” he said. “We lost hope in Gaza.”

By FARES AKRAM and MOHAMMED DARAGHMEH 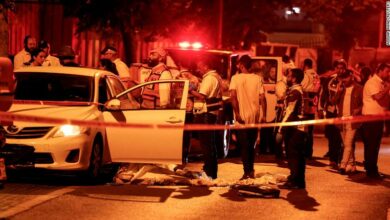