Turkey was only meant to be a waypoint on Samer Habib’s journey. But after leaving Gaza in 2018 for Europe, the 30-year-old dodged a Turkish smuggler’s con and persevered in building a new life in Istanbul. “Many Palestinians from the Gaza Strip live in very tough conditions in Turkey,” he said. “The jobs there are just enough to keep their heads above water and for many the wages aren’t even enough to feed themselves.”

When the coronavirus pandemic hit, things got worse. Habib lost his job and moved from one crowded flat to another to avoid ending up on the street. Like many others from Gaza, he spent some nights sleeping rough.

Syrians in Turkey were also hard-hit by unemployment, though for a long time they had it better than the Palestinians, Habib said. “They usually had an apartment to themselves and their families,” he said. “Us Palestinians had to share overcrowded flats to make the rent. But in the end, our chances ran out.”

To avoid starving, he and many other young Palestinians returned to Gaza. “But when the pandemic ends, we’ll leave again,” Habib said.

Many Palestinians share Habib’s dream of a life beyond Gaza, an enclave that has effectively been blockaded by Israel and Egypt for more than a decade. The 2014 war between Hamas and Israel compounded the drive to escape the violence and stifling political and economic conditions. Egypt’s limited opening of the Rafah border crossing in 2018 acted like a siphon, drawing a stronger flow of Gazans out with the promise of a chance for something better. Clashes with Israel’s military in March that year during demonstrations intensified the push to emigrate. Palestinian youths try to obtain permission to leave Gaza through the Rafah border crossing with Egypt in September 2019.

There are no accurate statistics on how many have left in recent years. In May last year, the Israeli state broadcaster “Kan” quoted a figure of more than 40,000 emigrants as of the same time in 2018. The United Nations estimated the figure at 20,000. Human rights experts in Gaza say that from 2014 to early this year, 70,000 left.

For those that can leave, Turkey is an important port of call to find work, says Saeed Awad. Since turning 20, he has had 10 years of work but another six years of unemployment in the economically starved Strip.

In April 2019, he made it to Turkey, working for a year at an electricity company until he was dismissed due to the pandemic. With no alternatives in sight, he also returned to Gaza. 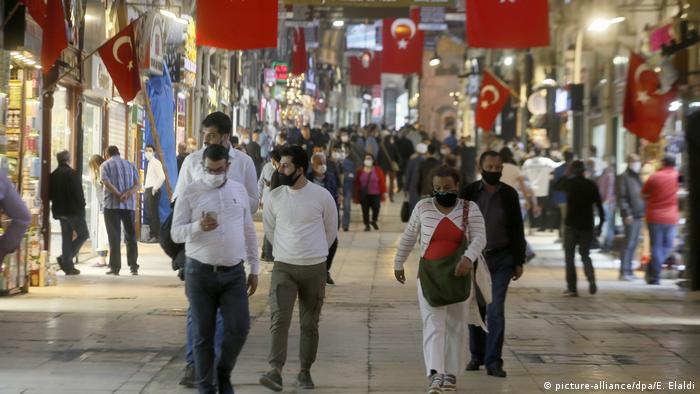 Life goes on for some at Istanbul’s Grand Bazaar, but many foreign workers have been laid off

“Turkey is a beautiful country,” Awad said, “but it is not rich and has little means to accept immigrants.”

At the same time, migrants are in high demand as a source of cheap labor. “This is where Turkey is different from European countries, which offer refugee programs that help them integrate and get qualifications. I’ve thought about travelling to Europe too, but it’s illegal and could cost you your life.”

Ahmed al-Masry had to take a completely different route. During a protest at the Israel-Gaza border two years ago, he was shot in his right leg by the Israeli army, breaking bones and severing tendons. With no prospect of treatment at home, he sought a way out. The Israeli army shot Ahmed al-Masry in the leg during 2018 demonstrations demanding Palestinians’ right to return to present-day Israel.

He aimed for Europe, via Turkey, but went to Egypt to get treatment for his injuries first. But after a year there, the coronavirus outbreak made onward travel impossible.

“I wanted to change my life — in Gaza I did a lot of different jobs, but we all ended up unemployed,” al-Masry said. “I even had to borrow money to return to Gaza. The pandemic has been cruel to Gazans in search of a new home.”

As the pandemic hit the Gulf countries, migrant workers like Mahmoud Ghanem from Gaza, and many others from Lebanon, Syria, India and the Philippines, were the first in the firing line.

After finding work at the start of the year in the UAE — ending a seven-year search for his first job since graduating with a business administration degree — Ghanem was soon laid off in May.

His experience of endlessly applying for jobs without success, only to end up back at square one, is typical, Ghanem said, and he is angry.

“I work so I can be my full self,” Ghanem said. “Young people in Gaza are lost in a hopeless situation between the choice to emigrate or join the political organizations that have destroyed us.” 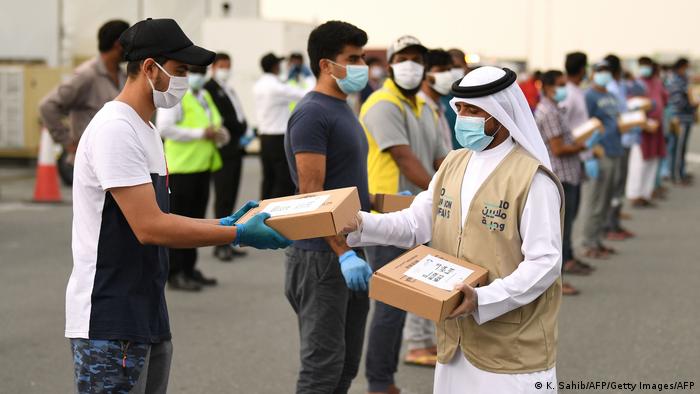 Volunteers distribute iftar meals to migrant workers during Ramadan in the United Arab Emirates. Many of the Gulf’s millions of guestworkers have also been laid off due to the pandemic.

Life in the Emirates is decent, he says, “this is very different from Gaza, where the problems with blackouts, water shortages, politics and bombings are always the same.” Despite other frustrations, Ghanem says that reality means he won’t stop trying to find ways out.

This story was adapted from Arabic and German by Tom Allinson

Organization of Islamic Cooperation rejects 'Deal of the Century'