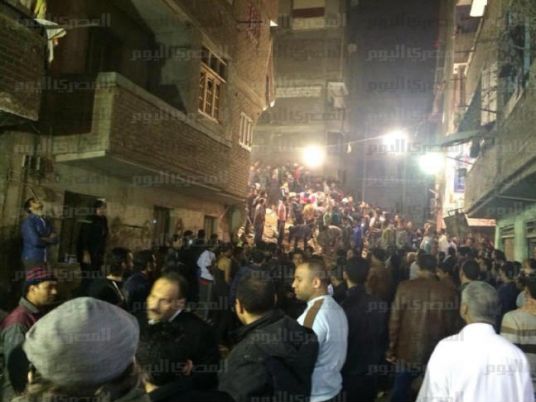 A gas cylinder exploded on Saturday inside a building in the western Alexandrian neighborhood of El-Max, causing the collapse of three buildings and the injury of one person.

A police team from the Interior Ministry and Civil Protection was immediately dispatched to the explosion site.

The team discovered that the blast had happened on the first floor, where a resident (referred to in reports by the initials N.H.) was preparing tea on a stove supplied by a gas canister that exploded.

The resident sustained first and second degree burns all over his body, and two neighboring buildings were extensively damaged by the blast.

The damaged buildings were 30 meters squared on average, two of them two storys, and the other a single floor.

The owners reccounted how they heard a deafening sound and ran out to investigate, at which point the three buildings collapsed in front of them.

The injured resident was transferred to Karmouz Hospital for medical attention.

Several building collapses have taken place in Alexandria Governorate over the past few years.

Failure by local authorities to execute demolition orders on time and the unauthorized construction of additional floors are the usual reasons for catastrophic building collapses, which Egypt has witnessed an increasing number of in recent years.

In January 2013, at least 28 people were killed and 12 injured in the collapse of an unlicensed residential building in Mamora, eastern Alexandria. Investigations at the time indicated that the building had been weak and had been developiong cracks in the walls for several years as it was constructed on unsuitable land and was served by an insufficient drainage system.