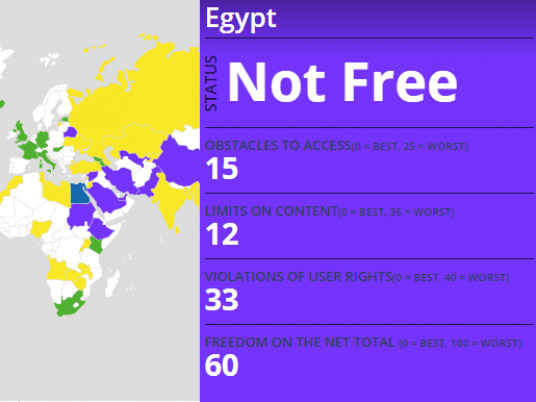 Egypt’s declined in the 2014 freedom ranking conducted by Freedom House , a US-based observer of world human rights statuses, designated the country as “not free.”
Egypt’s political rights ranking fell from a ranking of “partly free” to “not free” in the seven-rank scale by Freedom House’s Freedom in the World 2014 report, which also cited “violent crackdowns on Islamist political groups and civil society, and the increased role of the military in the political process” as other reasons for the decline.
Fifty-four countries showed overall declines in political rights and civil liberties, compared with 40 that showed gains, the report pointed.
Egypt’s internet freedom remained stagnant in the period 2013-2014, according to the organization’s report Freedom on the Net.
Egypt ranked 60th in the total ranking of internet freedom, said the report which relies on scales ranging from obstacles to internet access to limits on content and violations of users rights.
“Authorities repeatedly suspended telecommunications service in the Sinai Peninsula during military operations, disrupting the flow of information to and from the territory,” said the report of the period May 2013- May 2014. “The country’s highly divisive political environment has resulted in increasing verbal harassment between social media users and a declining willingness to speak out on contentious issues, resulting in self-censorship,” it added.
The number of internet subscribers in Egypt rose by 4 percent in August 2014 to 46.3 million from 44.5 million in July. World users are expected to reach three billion in 2015.
The report said the 2013 Constitution ensures freedom of expression only in theory while naming punishable offenses that could apply to online speech.
It also pointed to an increase in the arrests of online reporters while reporting on anti-government activism.
“Prison sentences ranged from suspended sentences to several years,” the report added.