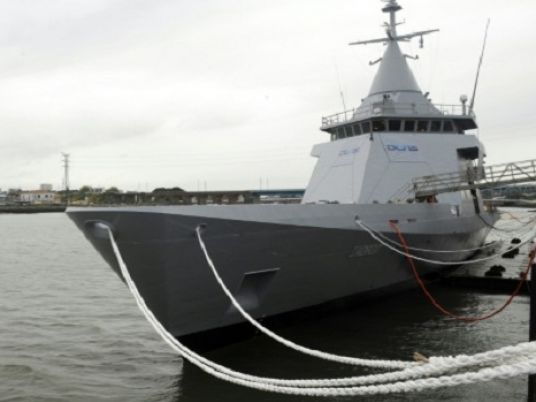 "There is a bid for two more corvettes; the discussions are ongoing," the source told AFP after the meetings.

The talks also touched on Libya, where Egypt had conducted air strikes on Islamist militants and pushed for intervention amid a slide into chaos in the neighbouring country.

"Overall on Libya what we can say is that during the meeting we underlined our support for the mediation by Bernardino Leon," the source said, referring to the UN mediator between Libya's rival governments.

The diplomat said the ball was now in the court of the formerly elected parliament, the General National Congress, to accept a Leon-mediated deal with the internationally recognised government in the east.

"The responsibility lies there to move forward on the unity government," he said.

Le Drian's visit to Cairo came days after Egypt took delivery of three of the 24 Rafale fighters it has bought from France in a 5.2-billion-euro deal.

Egypt bought the jets to boost its military capability in the face of an unstable Libya to the west and the threat posed by the Islamic State group in the Sinai Peninsula.

Egyptian pilots had flown the Rafales from France to Egypt after receiving training to pilot the advanced jets.

France has emerged as one of Egypt's most vocal supporters in Europe following criticism of Sisi over a massive crackdown on Islamists after the former army chief ousted president Mohamed Morsi in 2013.

French President Francois Hollande is expected in Egypt for the August 6 inauguration of an extension to the Suez Canal.

At least 1,400 people, mostly supporters of the Islamist Morsi, have been killed in a bloody government crackdown on protests.

Hundreds of soldiers and policemen have been killed meanwhile by jihadists in the Sinai Peninsula loyal to the Islamic State group.

Sisi has positioned himself as a frontline defender against IS.

His government argues that his domestic Islamist opponents are all of the same fabric as the jihadists that a coalition including France is battling in Iraq and Syria.