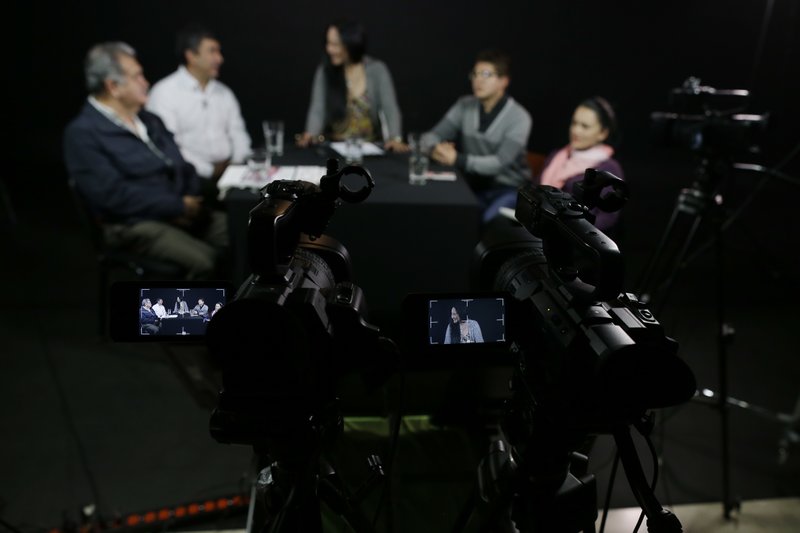 In a tiny bathroom, Marilu Ramirez prepares for her segment in a production studio by brushing her long black hair and covering her lashes in another coat of mascara, small luxuries in a life no longer being spent behind bars.

Sentenced to 27 years in jail for her role in a car bombing at a military school, Ramirez was released as part of Colombia’s peace agreement with leftist rebels and is now the host of an online debate show.

The live program is produced by Nueva Colombia Noticias, a new network started by former guerrillas with the Revolutionary Armed Forces of Colombia that aims to offer an alternative to what some see as a media landscape crowded with biased, traditional outlets.

One year after the signing of the accord, the ex-combatants are living in a hotel paid for by the Colombian government, teaching themselves how to operate cameras and gearing up to launch a daily newscast.

Their audience is still minuscule, but they hope to attract a large, loyal following by focusing on stories from the places they know best: remote parts of Colombia long neglected by state and establishment media networks alike.

“We want to give a voice to those who have been living for decades in silence, but experiencing firsthand the state’s neglect,” Ramirez said after a recent taping of her debate show, “La Mesa Caliente” (The Hot Table).

The story of Nueva Colombia Noticias is in many ways a microcosm of both the successes and challenges of reintegrating former guerrillas into Colombian society. Reporting on the streets, the ex-combatants are coming face-to-face with a Colombian populace reluctant to embrace them after five decades of bloody conflict. Many Colombians are also wary of the network’s continued ties and unabashed support for the former guerrillas’ new political party.

“They still have a long way to go in becoming independent and not appearing like propaganda,” said Fabiola Leon, the Colombia representative for international advocacy group Reporters Without Borders.

In the urban jungle of Bogota, the budding journalists are putting into practice many of the same techniques they learned while dodging bombs and bullets in the countryside: trying to keep calm even when interview subjects begin lambasting former rebels as monsters and terrorists.

“You feel the rejection,” said Gersson Pedraza, 25, who joined the FARC when he was 12. “And you just have to withstand it.”

The channel currently has 25 reporters in Colombia’s capital, nearly all of whom are former rebels living off monthly payments that the Colombian government agreed to pay as part of the peace accord. Those payments are equivalent to 90 percent of the nation’s current minimum wage, or about $225. The network also relies on journalists stationed at some of the 26 zones where former guerrillas are transitioning to civilian life.

A recent United Nations report identified the reincorporation of the 8,000 rebels initially gathered at those transition zones as the peace accord’s most critical issue. Today, just 45 percent remain at the demobilization camps. But while some have settled in cities or left to live with family, there is mounting concern that others are joining dissident groups or engaging in other illegal activities.

“This isn’t just about fulfilling promises,” said Jean Arnault, the UN representative for the Colombian peace process. “This is a matter of national interest.”

One bright spot has been the FARC’s own creation of nearly two dozen so-called productive projects at the camps. Many focus on agricultural activities like growing bananas and pineapples. Others help former guerrillas develop artisan crafts and promote ecotourism.

The leaders of Nueva Colombia Noticias consider their own endeavor to be one such productive project.

It began training former rebels to work as journalists while many were still in demobilization camps. They hired outside professionals, some who had worked for major international news organizations, to conduct months-long courses on basic skills like reading, writing and reporting.

A number of the rebels already had some experience working with cameras as de-facto war correspondents, when they recorded bombings and other confrontations with the military using camcorders provided by their commanders.

Manuel Bolivar, the director of Nueva Colombia Noticias, said the network is focusing its coverage on issues like social movements, inequality and human rights — many of the same topics that the FARC’s political party has identified as priorities. He said news organizations like Venezuela’s Telesur and the Russia’s RT network, both of which are state-sponsored, were examples of the type of outlet his endeavor aspires to be, though with its own distinct voice.

“We are not going to say we’re impartial because we’re not,” he said. “But I have insisted on us being objective. And objectivity doesn’t translate into neutrality.”

Ramirez, for her part, spent 10 years in jail for a crime she says she didn’t commit. Much of that time she kept connected to the world by listening to the news on a battery-powered, hand-held radio that she still keeps at her bedside.

Now, on her show, Ramirez discusses topics such as the special peace court stipulated in the peace accord, which she herself will one day have to appear before. She also says she would like to have military generals and even former President Alvaro Uribe, one of the peace agreement’s chief critics, on her show.

But like other former rebels, her life is still in flux: Her belongings are all kept in two pink suitcases, and she is uncertain where her home will be once the government’s hotel allowance dries up.

“Everything is packed,” she said. “Ready to go.”