The word “Al-Fagoumi” – the alias of Egyptian poet Ahmed Fouad Negm – is a linguistic combination of three Arabic words, reflecting aggressiveness, creative chaos and power inspired by people and poetry.

Director Essam al-Shamma’ decides to change the poet’s name in the film to Adham Fouad Nesr for no clear reason. The names of other main characters, such as Sheikh Imam, Safinaz Kazem and Azza Balbaa, are also changed in a naive attempt at abstraction that turns ridiculous as the movie fails to introduce similar changes to their contexts.

Thus “Al-Fagoumi” becomes mere commercial use of the famous poet’s diaries. We get bland characters that do not belong to the poet’s biography, but nor are they inspired by his journey. What's more, some influential characters in Negm’s life get to keep their names, such as his mentor, the caricaturist Hegazy.

It becomes clear that the filmmaker failed to grasp Negm’s character.

Another problem in “Al-Fagoumi” is the absence of a plot. The film shows significant events in the life of the bohemian poet without any flow. Even if Negm’s life took an illogical course, forced scenes – Nesr stands by the Nile and suddenly recalls his childhood so that the filmmaker can reflect on that period – are not justified.

Had it not been for Negm’s charismatic character and the current revolutionary spirit, the desultory plot of “Al-Fagoumi” would not have appealed to the audience at all.

The song “Bashayer Yanayer” (January’s Glad Tidings) plays a vital role in turning the focus away from the film’s naive hypothesis, which becomes especially obvious in its portrayal of Islamists. The director's attack of them echoes the current stance on Salafis.

This becomes clearer in the story of Um Amal (Gehan Fadel), a landlady who becomes a bad example of the poorer classes. Negm engages with her sexually rather than on intellectual or humane levels. She and her daughter succumb to a superficial religious current represented by their Salafi husbands, who are stereotypes just like the images promoted by state media under Hosni Mubarak's regime.

Nesr clashes with these two radicals in the second half of “Al-Fagoumi”, which suggests to the audience that these events happened after 25 January 2011.

In terms of performances, there is the usual incongruity between body movement and facial expression in the acting of Khaled al-Sawy, who stars as Nesr. Fadel, meanwhile, is probably the worst choice for Um Amal. Her pronunciation is too delicate for a bad-mouthed woman, making her whole performance unconvincing. As for Kenda Aloush, she was apparently selected for her successful duet with Sawy in a popular Ramadan TV series. The character she plays, Mahitab, comes off as bland, and most of her scenes seemed to be lifted from gossip magazines.

The worst part of “Al-Fagoumi” is its concluding sequence. The director chooses Negm’s famous poem “January”, which he delivers in prison, as the penultimate scene. Lacking the liveliness required to end a movie, it at least presents an acceptable climax. But we are then stuck with a long scene, with Nesr looking years older, singing the initial lines of “Baheya,” while sitting against a white background. It is confusing – perhaps it is meant to suggest that he is dead and sings to Egypt from heaven. It takes away any feelings the poem might have stirred, and the director thus proves his ability to commit every dramatic mistake in one film. 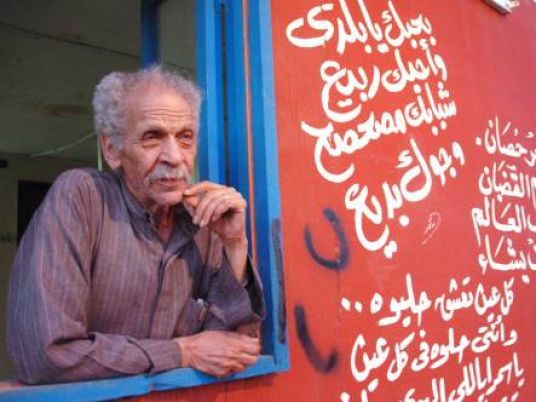 A new Sawiris award in poetry named after Negm