By Susanne Schumann for Brigitte

Overcoming an eating disorder can often take years of struggle. Having lived through it herself and with the help of two apps, Ekaterina Karabasheva hopes to help people suffering from or at risk of developing the condition.

It started when Ekaterina was 16. She began by leaving just a little on her plate. She cut out butter, steered clear of sweets, and avoided all calorific drinks. As time went by, the number of foods missing from her diet grew – until she could barely bring herself to eat an apple without feeling guilty.

Ekaterina Karabasheva had always been the perfect daughter: kind, she did well at school and was successful in everything she set her mind to. Yet when this Bulgarian native set about achieving the “perfect figure”, she foundered: anorexia dominated her life for half a decade.

Hundreds of thousands of people live with an eating disorder

In Germany, the lives of several hundreds of thousands are dictated by an eating disorder. According to the Federal Office for Health Education, around 1.5 percent of women and just 0.5 percent of men are affected, based on recorded cases alone.

Counting calories, swearing off foods, starving yourself, obsessing about food, feelings of guilt, self-loathing, over-exercising, binging, taking laxatives, vomiting – most sufferers find their entire routine is at the mercy of the illness. Many isolate themselves from friends and family to avoid the embarrassment of eating around others. Sufferers can waste years of their life in this way.

Ekaterina was relatively quick to realise that anorexia would not solve her lack of self-esteem. At 19, she made the first attempts to overcome her eating disorder. Now, eight years later, she has regained control of her life, completed her studies, recently become a mother, and committed herself to projects she hopes will enable her to help other sufferers.

Sufferers are documenting their battles on Instagram under #edrecovery (ED = eating disorder). There are already more than three million #edrecovery posts, mainly photos of food. A plate of noodles, toast, a tub of Ben & Jerry’s, pancakes with Nutella, omelettes, tacos, muesli – to non-sufferers, battling an eating disorder must seem, quite literally, like a piece of cake.

But at the beginning of recovery, every meal is a battle. Take for example the caption @kams_recovery has added to a photo of her ice cream: “Recovery win! First time I’ve enjoyed ice cream without purging in over a year!” 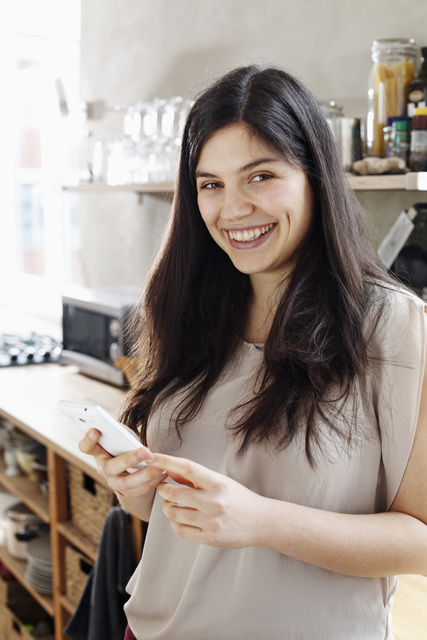 This and the millions of other posts like it on Instagram are a popular and fundamental element of a behavioural approach to treatment: keeping a food diary. For months, Ekaterina documented each meal she ate. She kept a record not just of what she ate but how she felt about it. Did she feel like a loser for eating a bread roll? Or did she perhaps feel positive about nourishing her body? This was important because it enabled Ekaterina to root out the connections she had developed between eating and negative emotions over the years and ultimately dispel them.

The idea for the app emerged from her own recovery

When it came to her food diary, Ekaterina was faced with a problem: would she feel comfortable pulling out an A4 pad at uni, at the canteen or in a café and noting down her feelings in full view of others? It was tricky. As a result, she often wouldn’t document her meals until later in the evening – and by then, she would have long forgotten how she felt at the time.

Instagram presents a good alternative. Food bloggers take photos of their food and then write a little about it, and so keeping a food diary becomes an unobtrusive part of their daily lives. But what if sufferers do not want to out themselves publicly? What if some clueless person sees one of the images, writes a stupid comment underneath (“Wow, that ice cream is huge!”) and upsets the sufferer?

Ekaterina has developed an ideal solution, combining the best of Instagram and an A4 pad: the “Jourvie” app. Using their mobile phones, “Recovery Warriors” can easily document their meals, including situation and emotional state, save them and discuss them with their therapists if necessary. Photos can also be added. The app is free – Ekaterina has no commercial motive.

Ekaterina, now 27, said, “For me, it was important to transform my negative experiences with this illness into something positive, to give sufferers the tools to overcome their condition”.

Last year, in collaboration with AOK Nordost, Ekaterina was able to develop and launch a second app: “Elamie”. This app is designed to help parents and paediatricians recognize the signs that a person is at risk of developing an eating disorder. Certain personality traits – such as the perfectionism that Ekaterina experienced – can point to a potential lack of self-esteem or an eating disorder.

Parents use the app to document their child’s behaviour for a week according to specific criteria. This data enables doctors to determine whether a child requires observation or treatment. “We are pleased to be able to work on promoting early recognition of eating disorders together with AOK Nordost and doctors. We’re stronger together!”

Eating disorders concern all of us

While every eating disorder is complex and highly personal in its own way, there are factors in our society which encourage them. These might be the thin, size-zero models that the media has spent decades holding up as the aesthetic ideal, or the economic pressure to perform, or the increasing attention given to airbrushed photos on social media, combined with a growing trend towards isolation in “real” life. The over-abundance of food on offer also provides fertile ground for eating disorders to develop. That’s why it’s our job as a society to help fight eating disorders. We can do this by ensuring that we do not exclude sufferers, instead demonstrating that we respect and believe in them. No one with an eating disorder is a lost cause. Everyone can win their battle with an eating disorder – just like Ekaterina.