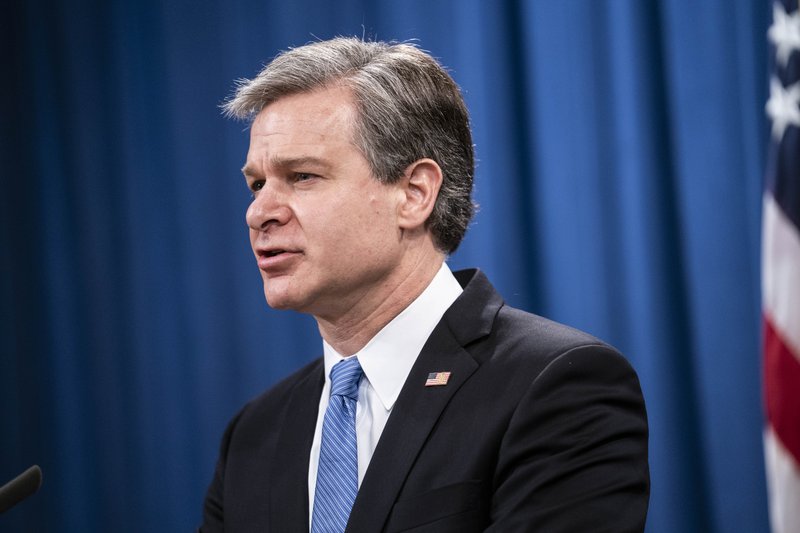 WASHINGTON (AP) — FBI Director Chris Wray is set to testify for the first time since the deadly Jan. 6 deadly riot at the U.S. Capitol, with lawmakers likely to press him on whether the bureau adequately communicated with other law enforcement agencies about the potential for violence that day.

Questions about the FBI’s preparations for the riot, and investigations into it, are expected to dominate Wray’s appearance Tuesday before the Senate Judiciary Committee. He’s also likely to be pressed on how the FBI is confronting the national security threat from white nationalists and domestic violent extremists, and whether the bureau has adequate resources to address the problem.

The violence at the Capitol made clear that a law enforcement agency that revolutionized itself after the Sept. 11, 2001, attacks to deal with international terrorism is now scrambling to address homegrown violence from white Americans. The Biden administration has tasked his national intelligence director to work with the FBI and Department of Homeland Security to assess the threat.

Wray has kept a notably low profile since a violent mob of insurrectionists stormed the Capitol two months ago. Though he has briefed lawmakers privately and shared information with local law enforcement hearings, Tuesday’s oversight hearing will mark Wray’s first public appearance before Congress since before November’s presidential election.

The FBI is facing questions over how it handled intelligence in the days ahead of the riot, and whether warnings it had of potential violence reached the correct officials.

Last week, for instance, the acting chief of the Capitol Police said a Jan. 5 report from the FBI made its way to investigators within the police force and to the department’s intelligence unit but was never sent up the chain of command. The report warned about concerning online posts foreshadowing a “war” in Washington the following day. The FBI has said the report, which it says was based on uncorroborated information, was shared through its joint terrorism task force.

Wray may also face questions about the FBI’s investigation into the massive Russian hack of corporations and U.S. government agencies, which happened when elite hackers injected malicious code into a software update.

Image: FILE – In this Oct. 28, 2020, file photo, FBI Director Christopher Wray speaks during a virtual news conference at the Department of Justice in Washington. Wray is set to testify for the first time since the deadly Jan. 6 deadly riot at the U.S. Capitol. (Sarah Silbiger/Pool via AP)

US militias want to 'blow up' Capitol, police chief warns

Security officials to answer for Jan. 6 failures at Capitol

Impeachment isn’t the final word on Capitol riot for Trump