“Mother, father, sisters, brothers, cousins all gone. My life has been shattered. … Please help me God,” she sobbed as she waited in a long line in the pouring rain Wednesday outside Freetown’s overwhelmed mortuary to try to identify the corpses of her loved ones.

She was surrounded by hundreds of others, some wearing face masks to try to ward off the smell of death and blue hospital booties over their shoes. Many clutched photos in the desperate hope that they would be among those fortunate enough to find their loved ones and give them a proper burial.

For Stevens, the wait brought only disappointment. “I was only able to identify two of my entire family,” she said in anguish.

More than 300 people were confirmed dead, a third of them children, from the devastating mudslides that struck before dawn on Monday, triggered by days of heavy rain. Red Cross officials estimated some 600 others remained missing more than 48 hours after the storm hit while most of the victims slept. Thousands of people lost their homes. 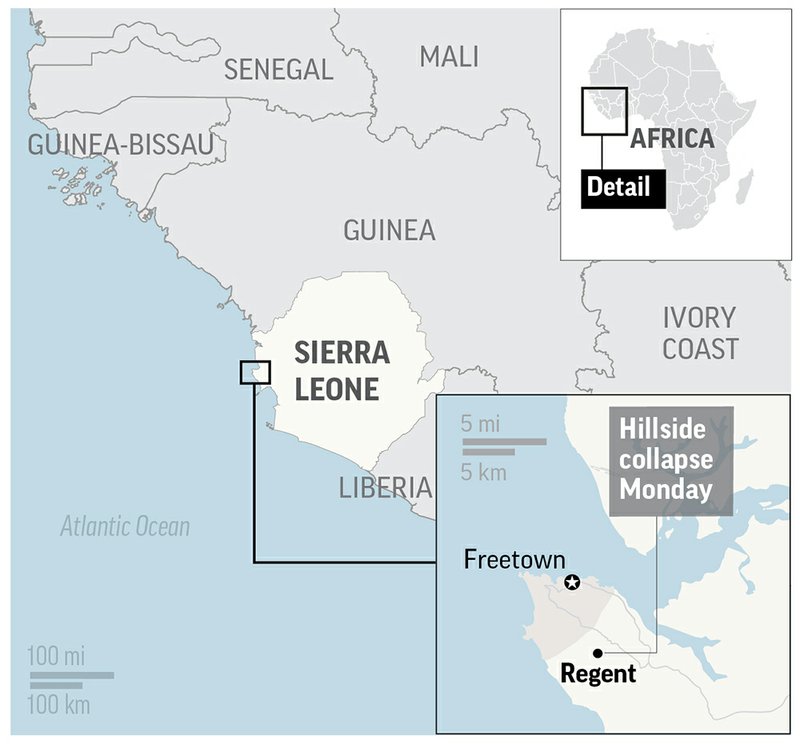 On Wednesday, crews continued the grim work of digging out bodies from the tons of mud and debris that came roaring down the hillsides onto impoverished, low-lying areas of Freetown and surrounding settlements. Many were volunteers who dug with shovels, pick axes and, at times, only their hands.

At the city’s Connaught Hospital morgue, firefighters, military personnel, police and volunteers tried to help grieving survivors with the difficult process of finding their dead relatives, many too mangled and decomposed to be identified. President Ernest Bai Koroma’s office has said that all unidentified corpses will be given a “dignified burial” in the coming days. He called for seven days of mourning starting Wednesday.

Amara Kallon held up photos of his 3-year-old daughter, Hawa, who had been spending her school holidays with her mother in Freetown when a wall of mud hit their home, killing them both. In one, the wide-eyed girl held a microphone as she sang; in another she was dressed in festive bright pink native garb, her hair braided with beads.

With the help of hospital porters, who used the photos to find the child’s body among the hundreds at the morgue, he was able to identify her corpse.

“The present condition of my daughter is nothing good to talk about,” he said. “I’ve spoken with other family members and we have decided to allow the government to go ahead with dignified burial process.”

Amid the chaos of rescue efforts, the government has said contingency plans were being put in place to try to stem the outbreak of diseases such as cholera.

Sierra Leone’s government has pleaded for international assistance as it reels from the disaster. With rain forecast for at least the coming week, the threat of further mudslides around Freetown remained. Many poor areas of the capital are near sea level and have poor drainage systems, which makes flooding worse during the rainy season.

Freetown also is plagued by unregulated construction of large residential houses in hilltop areas. Deforestation for firewood and charcoal is another leading contributor to flooding and mudslides.

Forty-year-old Brima Mundeh, who escaped the disaster with his two children, said he feared that three missing family members were buried under the mud. Three other relatives have already been confirmed dead.

“I can’t describe the magic that took me and my family out of my house,” he said. “But I believe it’s the work of God because I don’t know where the strength and power came from to get us out.” US: Civilian toll in Syria raid may be higher than thought