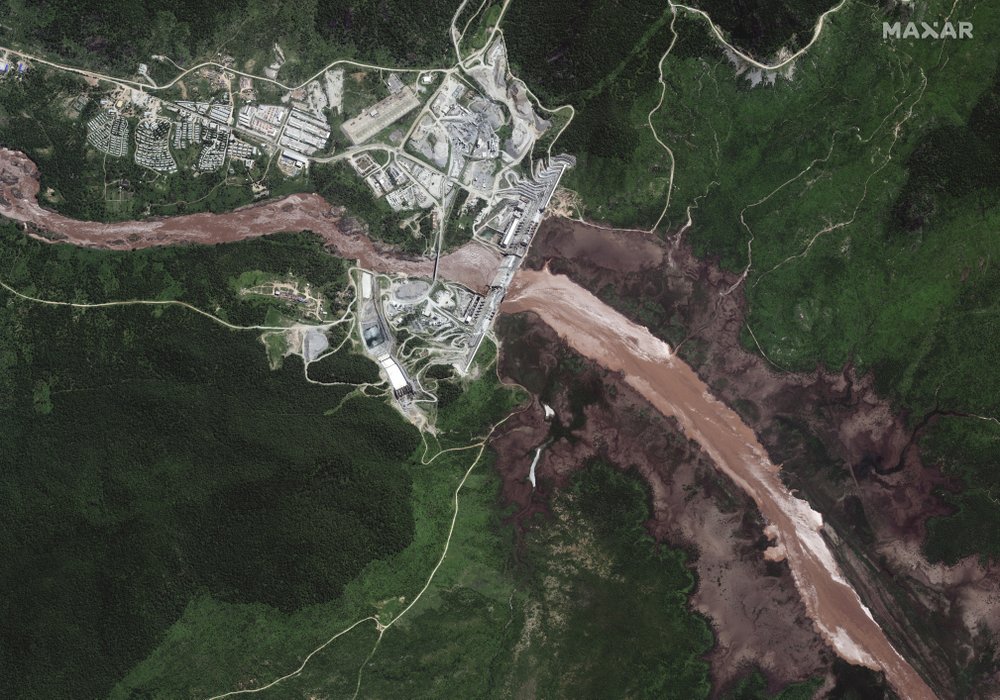 Ethiopia’s national television network apologized for a statement it published earlier regarding the initial filling of the Grand Ethiopian Renaissance Dam (GERD) reservoir.

The channel walked back its previous statement that the filling of the dam’s reservoir has begun, saying, “We apologize for the misinterpretation of the previous report on our social media page.”

The Ethiopian Ministry of Water, Irrigation and Energy announced on Wednesday that negotiations on the Renaissance Dam will continue with Egypt and Sudan.

In a statement, Ethiopian Minister of Water, Irrigation and Energy, Seleshi Bekele, said that negotiations on the dam will continue in the interest of Ethiopia, and that they will be held not only for the benefit of the current generation, but also for the benefit of future generations.

He said that the height of the dam has increased from 525 to 560 feet this year, and that the water level is expected to increase from last year’s level of 525 feet to reach 560 feet. He added that the dam will be filled according to the construction of the dam.

Egypt’s Foreign Ministry requested an urgent official clarification from the Ethiopian government regarding media reports that Ethiopia has begun filling the reservoir of the Renaissance Dam.

Ministry Spokesperson Ahmed Hafez said that Egypt was following up what was being raised in the media regarding the matter.

Egypt adheres to its historical rights in the waters of the Nile River, and to international resolutions and laws in this regard. It also rejects any unilateral measures by Addis Ababa, and demands that Ethiopia adheres to the principles of the international law.

Bekele on Wednesday morning announced that the initial filling of the Renaissance Dam has begun, before denying the announcement in statements to the Associated Press, adding that photos published by Reuters merely showed water from heavy rains.

The Sudanese Ministry of Irrigation and Water Resources, meanwhile, announced that the water level of the Blue Nile River has decreased by 90 million cubic meters per day, confirming the suspected closure of the Renaissance Dam gates.

The ministry clarified in a statement that after local and international media circulated satellite information and pictures indicating that Ethiopia had begun filling the Renaissance Dam before reaching an agreement on filling and operation rules, the Ministry of Irrigation and Water Resources asked its specialized agencies to measure the levels of water in the Blue Nile to validate the circulated news.

Sudan reiterated its rejection of any unilateral measures taken by any party, especially since the African Union and South African President Cyril Ramaphosa continue their efforts to help the three countries reach a consensus on the remaining contentious points in negotiations.

The Sudanese government and the Ministry of Irrigation and Water Resources will follow up these developments in a way that secures Sudanese national interests, the statement added.

The Ethiopian Prime Minister Abiy Ahmed has said that his country will start filling the Renaissance Dam reservoir to take advantage of the heavy rainy season, stressing that it will not cause any harm to Egypt.

Egypt, Sudan and Ethiopia prepare for mini-summit on GERD crisis