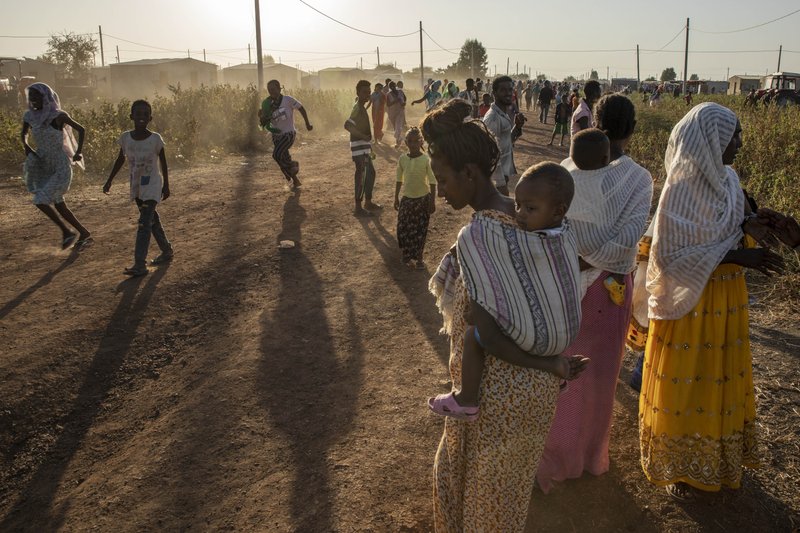 NAIROBI, Kenya (AP) — Ethiopia’s government is again warning residents of the besieged capital of the embattled Tigray region as the clock ticks on a 72-hour ultimatum before a military assault, saying “anything can happen.”

Senior official Redwan Hussein told reporters Monday that the Tigray regional leaders are “hiding out in a densely populated city; the slightest strike would end up losing lives.”

Human rights groups and others were alarmed over the weekend when Ethiopia’s military warned civilians in the Tigray capital, Mekele, that there would be “no mercy” if they don’t “save themselves” before the offensive to flush out defiant regional leaders. Amnesty International warns that deliberately attacking civilians and civilian objects “is prohibited under international humanitarian law and constitutes war crimes.”

Redwan said that Mekele, a city of around 500,000 people, is now encircled at a distance of about 50 kilometers (30 miles), and with rougher terrain left behind “what remains is the plain land, easier for tanks.”

He added, “by providing a brute fact, it is letting people to understand the reality and make the right choice.” Ethiopia’s government is urging Mekele residents to separate themselves from the TPLF leaders in time.

Ethiopia’s government again rejected international pleas for dialogue with the TPLF leaders, regarding them as criminals on the run.

The heavily-armed TPLF dominated Ethiopia’s ruling coalition for more than a quarter century before Abiy came to power and introduced sweeping political reforms and sidelined TPLF officials. Now, each government sees the other as illegal, with the TPLF objecting to the delay of national elections because of the COVID-19 pandemic and Abiy’s government infuriated by the Tigray region defiantly holding its own vote in September.

Civilians are caught in the middle of what some experts have described as a conflict akin to an inter-state war. The TPLF alone has been estimated to have a quarter-million fighters.

“I can tell you that we remain extremely concerned about the safety of civilians in the Tigray region, especially the more than half a million people – including more than 200 aid workers – who remain in Mekele following information that fighting might move into the city in the coming hours,” UN spokesman Stephane Dujarric told reporters.

He also called for “free, safe and unhindered humanitarian access” to the Tigray region, which remains almost completely sealed off from the world with communications severed, roads blocked and airports closed.

A humanitarian disaster is unfolding both inside and outside the Tigray region. Food, fuel and medical and other supplies are running desperately low in the Tigray region and the UN says around 2 million people there urgently need aid.

Meanwhile, nearly 40,000 Ethiopians have now fled into Sudan to escape the fighting, severely burdening local communities in the remote region as humanitarians struggle to hurry food and shelter to the area.

Image: Tigray refugees who fled a conflict in the Ethiopia’s Tigray region, run at Village 8, the transit center near the Lugdi border crossing, eastern Sudan, Sunday, Nov. 22, 2020. Ethiopia’s military is warning civilians in the besieged Tigray regional capital that there will be “no mercy” if they don’t “save themselves” before a final offensive to flush out defiant regional leaders, a threat that Human Rights Watch on Sunday said could violate international law. (AP Photo/Nariman El-Mofty)

Ethiopia military: we will use tanks, artillery to capture city of Mekelle

She fled Ethiopia’s fighting. Now she warns of ‘catastrophe’