In what is perhaps the fiercest and the most exhaustive attack against Donald Trump in hip-hop, Eminem “came to stomp,” unleashing on the President in an explosive 4.5 minute freestyle — which aired during Tuesday night’s BET Hip Hop Awards — calling Trump everything from “Donald the b—-,” to a “racist grandpa.”

A request to the White House for comment was not immediately returned.
The Detroit rapper, who has slammed Trump previously in the nine-minute 2016 freestyle “Campaign Speech,”and in Big Sean’s “No Favors,” had criticized Trump supporters in the past, but this time he took it a step further, directly addressing his own fans on the issue:

“And any fan of mine who’s a supporter of his, I’m drawing in the sand a line, you’re either for or against, and if you can’t decide who you like more and you’re split on who you should stand beside, I’ll do it for it for you with this. F— you,” he said toward the end, raising his middle finger. 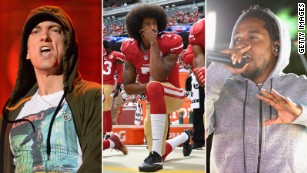 The latest freestyle, which Eminem revealed on Twitter is called “The Storm,” comes as anticipation for Eminem’s eighth studio release builds. The rapper decried Trump’s comments following the white supremacist rally in Charlottesville, questioned the President’s own patriotism following his attacks on athletes and Sen. John McCain, and in closing, issued a passionate tribute to Colin Kaepernick. 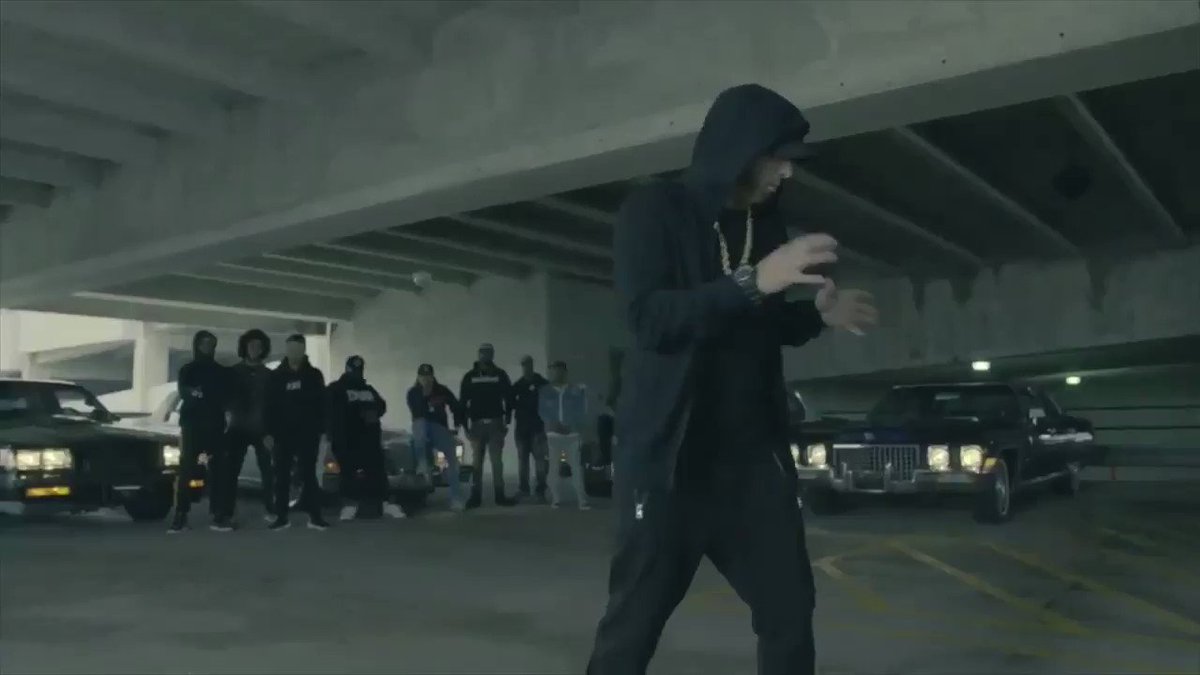 I appreciate you @Eminem

“I appreciate you @Eminem,” Kaepernick tweeted, along with a fist emoji.
The former San Francisco 49ers quarterback is now a free agent after he rose to national prominence last fall when he refused to stand for the national anthem to protest police brutality. Eminem previously expressed his support for Kaepernick in “Campaign Speech.”
Here are the 11 most explosive lines from his newest anti-Trump freestyle in the order that they appear:

1) ‘A kamikaze that will probably cause a nuclear holocaust’

Here’s the full verse: “We better give Obama props ’cause what we got in office now is a kamikaze that will probably cause a nuclear holocaust while the drama pops, and he waits for s— to quiet down, he’ll just gas his plane up and fly around till the bombing stops.”
Here, Eminem is likely referencing Trump’s war of words on social media with North Korea’s Kim Jong Un, whom the President referred to as “little rocket man.”

This line comes after Eminem references rising tensions in America.

3) ‘Racism’s the only thing he’s Fantastic 4 cause that’s how he gets his rock off, he’s orange’

Here’s the full verse: “That’s why he wants us to disband cause he cannot withstand the fact we’re not afraid of Trump. Walking on egg shells, I came to stomp. That’s why he keeps screaming, ‘Drain the swamp,’ cause he’s in quicksand.”
Here, Eminem criticizes those who have been tepid when it comes to expressing their opposition to the President.

“But this is his form of distraction, plus he gets an enormous reaction when he attacks the NFL, so we focus on that instead of talking Puerto Rico or gun reform for Nevada. All these horrible tragedies and he’s bored and would rather cause a Twitter storm with the Packers.”

Here, the rapper slams the President for spending days attacking NFL players who take a knee and escalating the feud as a hurricane ravaged Puerto Rico and a massacre occurred in Nevada. Trump visited both Puerto Rico and Las Vegas following each disaster.

6) ‘Who’s going to pay for his extravagant trips’

Full verse: “He says he wants to lower our taxes, then who’s going to play for his extravagant trips back and forth with his fam to his golf resorts and his mansions?”
Last month Trump unveiled a Republican framework for tax reform that calls for sweeping tax cuts and a simplification of the tax code.

Full verse: “Same shit that he tormented Hillary for and he slandered then does it more. From his endorsement of Bannon, support for the Klansman, tiki torches in hand for the solider that’s black and comes home from Iraq and is still told to go back to Africa.”
Here, Eminem is referring to Trump’s former chief strategist Steve Bannon, who is also the executive chairman of the conservative media outlet Breitbart News.

This line comes before the rapper says Trump is ignoring America’s racist past.

9) ‘To him, you’re zero cause he don’t like his war heroes captured’

“He says you’re spitting in the face of vets who fought for us you b——-, Unless you’re a POW who’s tortured … cause to him you’re zero cause he don’t like his war heroes captured. That’s not disrespecting the military.”
Eminem accuses the President of disrespecting the military — a charge that Trump recently leveled against athletes who take a knee during the national anthem. In this lyric, he references Trump’s previous attacks on Arizona Sen. John McCain, who spent five years as a prisoner during the Vietnam War. In 2015, Trump questioned whether McCain is a war hero, saying, “I like people that weren’t captured, OK?”

You can check out hip-hop’s strongest lyrics on Kaepernick HERE.

11) ‘The rest of America stand up. We love our military and we love our country but we f—— hate Trump’

Eminem’s latest attack is part of a larger trend in hip-hop, which turned on Trump in 2016 and largely settled for Democratic presidential nominee Hillary Clinton, after nearly three decades of idolizing his wealth and power in hundreds of lyrics.
Tags
BET awards Donald Trump Eminem

Facebook considering whether to allow Trump to return, decision expected in ‘coming weeks’