Ihab Ammar did not last half an hour at the meeting between “the revolution’s youth groups” and members of the Supreme Council of the Armed Forces (SCAF) on Wednesday. For Ammar, that was all the time it took to see that a dialogue billed as a chance to connect with the country’s military and political leaders was in reality a continuation of the council’s tendency to talk at civil society and activist groups rather than engage them.

“I did not come here to listen to a history lesson about the military,” said Ammar, who is an activist with a PhD in political science.

The abruptly-organized conference – invited to which were what seemed to be any group with a title incorporating the words “youth”, “coalition” and “revolution” – cemented the perception among many that the SCAF is having some communication problems with groups pushing for change.

Since the hasty referendum on 19 March to approve Egypt’s interim constitution, the SCAF has been featured more prominently in their political garb, engaging as statesmen as much as military men. Egypt’s military caretakers have issued laws meant to regulate political party life and are set to issue a law regarding parliamentary structure.

Many have criticized both the unilateral nature of the military’s political decisions and the way it has often operated in the pluralistic, popular manner of politicians seeking to curry favor.

The military has also been criticized for using what seems to be scare tactics against the media. Over the past two weeks it has summoned six media personalities to explain statements they made against the military in various outlets.

Many consider these actions a continuation of the culture of censorship and power enjoyed by previous rulers. Others can forgive them as missteps by a military unused to playing the role of civil leader.

“There was some disorder in the decisions of the (military) council because the council and the professional military are not a political organization,” said political analyst Amr al-Shobaky.

At the Wednesday meeting, SCAF member Mohamed al-Assar said that the military “has detected 83 people attacking the military this week.” He attacked the media’s role, saying it is trying to create a divide between the military and the people.

Shobaky, however, said military summons are an inappropriate way of dealing with opposing viewpoints and expressed his bewilderment at the SCAF’s inability lately to accept dissension. Such authoritarian actions have invited more criticism about the military council’s ability to engage in an open discussion.

The military council is participating in the National Accord Conference and has given its blessing to the National Dialogue. SCAF member Mamdouh Shaheen previously told Al-Masry Al-Youm that the forthcoming parliamentary law is being proposed for discussion among popular groups.

Activists are suspicious of many of the SCAF’s attempts to engage in dialogue. Ahead of the Wednesday meeting, a large number of the known activist revolutionary groups decided to boycott the conference.

The 6 April movement, the 25 January Revolution Youth Coalition, the National Front for Justice and Democracy and 33 other groups released a statement of their reasons for boycotting, including the conference invitation’s lack of talking points or structure. They also said the continuation of military trials for activists and demonstrators is a stumbling block.

“The invitation of revolutionary movements also lacks seriousness in dealing with these groups. So we cannot agree with the content and political context that governs this meeting,” the statement read.

The statement turned out to be prophetic – at least 30 attendees, such as Ammar, left with the same impression.

“We hoped that there would be some sort of dialogue,” said Mohamed Allem, a member of the 6 April movement. “The agenda has eight points, and the last point was for discussion… There was not even a microphone for the youth crowds.”

Allem attended out of curiosity, but said he was immediately disappointed and also did not recognize the majority of the youth groups there.

More than 1000 groups reportedly sent representatives and many complained that the Muslim Brotherhood was overrepresented at the forum.

But some of the attendees left with positive impressions.

“It was a good opportunity to interact with the Supreme Council and see how they’re thinking,” said Hassan Mohamed, a 28-year-old member of the Revolutionary Coalition of Islamic Youth.

Reports suggest that the Muslim Brotherhood and other religious activist and political youth groups were well represented in the meeting.

SCAF was able to press on some issues to ease fears regarding their future role in Egyptian civil life. The council confirmed that it would not be fielding a presidential candidate, and that it fully supports a civil state. They also responded to criticism that they are not taking decisive steps on popular issues. Shaheen said that the call to dissolve and restructure local councils will soon be resolved as the council is coming to a decision on it.

He also added that SCAF is not above the law, and that SCAF members will accept criticism and oversight on some of its decisions.

"I'm glad that the military council took this opportunity to ease our fears about their role and some of their decisions.  However, there was no real discussion," said Mohamed Fawzy, a member of the Coalition of Youth Law Graduates who attended the meeting.

The perceived unilateral decision-making process of the SCAF has left some feeling that the revolution has not yet managed to escape an absolute ruler.

“The SCAF has been making its promises for the revolution verbally, not practically,” said Ammar.

The military’s inability to cope with detractors or admit to shortcomings has left the impression that they are failing to deal with opposition – in much the same way Mubarak did.

“Those who engage in dialogue with all these different groups can also attempt to engage with various skeptics with open dialogue and not military summons,” Shobaky said.

Some fear that the activists are developing the same resistant and unproductive relationship with the SCAF that they had with the state under Mubarak.

“I was an opposition member before Mubarak stepped down, and I’m still in the opposition (in the same context) now. I am tired of always being in opposition,” said Rami Ghanem, a founding member of the National Front for Justice and Democracy. 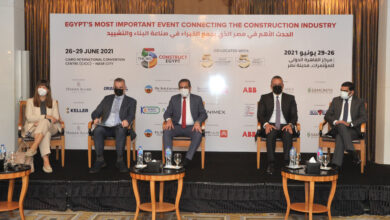 The Big 5 Construct Egypt returns from June 26 to 29