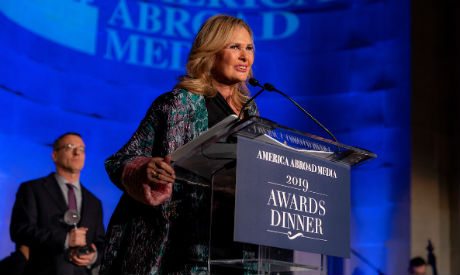 America Abroad Media (AAM) honored Egypt’s acclaimed star Yousra at its seventh edition during its annual dinner that took place in Washington, DC, celebrating the star’s artistic contributions that have presented Americans with remarkable representations of Egyptian history, according to the press release.

“Yousra is an icon in the Middle East and a true inspiration to her millions of fans, both through her brilliant work as an actress on screen and her devotion to her society and a better world,” said Aaron Lobel, founder and president of America Abroad Media. “AAM is proud to honor the incomparable Yousra at our 7th Annual Awards Dinner in Washington, D.C,” he added.

Upon receiving the prestigious award, Youssra expressed her pride and appreciation for the opportunity to represent her country through global recognition.

John Malkovich and Variety film critic Jay Weissberg commented warmly on Yousra’s win in a press release. They spoke of their personal experiences with Yousra as a star and a great friend as well. They asserted that Yousra is a respectable icon for women’s empowerment in the Middle east.

Many top Hollywood stars congratulated Yousra on her award, including Harvey Keitel. He commented: “In your award is my reward, because I have this opportunity to tell you, ever since that night I first met you in Cairo, how lovely and strong an impression you made on us.”

Yousra is a United Nations Goodwill Ambassador who was featured in Arabian Business’ “World’s 100 Most Powerful Arab Women” and “50 Most Influential Arabs” list, according to her profile on the AUC website.

Among more than 60 global and local awards, the Egyptian icon was granted the cinema award at the Arab Women of the Year ceremony in London.

She has participated in numerous prestigious film festivals including the Cannes Film Festival and the Venice Film Festival.

She further bolstered her career through collaborations with late prominent Egyptian director Youssef Chahine in films such as “Hadduta Masreya” (Egyptian Story; 1982), “Iskendereya Kaman we Kaman” (Alexandria Again and Forever; 1989) and “Al-Mohager” (The Emigrant; 1994).