Factories and entrepreneurs in Egypt are still facing tremendous “risks” after the flotation of the Egyptian pound in November 2016, the Financial Times newspaper underlined in a report on Sunday.

Some companies suspended their expansion plans as a result of the increasing inflation and the 50 percent drop in the value of Egyptian pound.

Although the banking sector is slowly recovering from the shortage of foreign currencies, manufacturers’ working capital and the consumer’s purchasing power is still down by 50 and 30 percent respectively, the report ratified.

The Central Bank of Egypt (CBE) raised the lending interest rate by 200 basis points for the second time this year (19.75 percent in July from 17.75 percent in May) in an attempt to reduce the impact of the devaluation and encourage exportation.

However, the private sector’s exports — especially in food industries — declined, affected by the conflicts in Libya, Syria and Yemen.

“Who can keep a healthy job with these rates?” Managing Director of Multiples Group Omar al-Shaniti stated in his interview with the Financial Times.

“The government should take measures to reduce bureaucracy and monopolies, to ease up the trade movement in the market,” Shaniti remarked.

The government imposed Value Added Tax (VAT) and cuts in energy subsidies have been implemented to reform Egypt’s macroeconomics.

Increasing interest rates was necessary for alleviating the impact of rising inflation, the IMF Mission Chief for Egypt stated, noting that inflation rates are expected to decline 11 percent by mid-2018.

CBE governor Tarek Amer told state-run al-Akhbar newspaper in July that the recent hike in interest rates should lead holders of US dollars to buy Egyptian pounds, noting that foreign reserves were “nearing $32 billion — the highest since the 2011 revolution.” 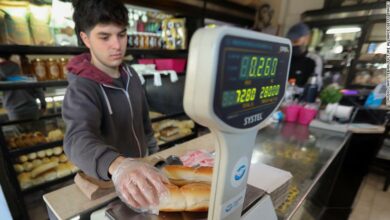