The Egyptian-German archaeological mission operating in Matariya area on Monday morning lifted part of the excavated King Ramses II's statue, which was pulled out of the ground last Thursday.

The statue will be covered with acidity-free paper and wet cotton with distilled water. The white gauze that covered the statue has been removed.

Residents of Matariya gathered during the pullout and chanted "Here are Egyptians!", "Here is Ramses!", and "Matariya! Matariya!".

The Ministry of Antiquities announced it is gearing up to complete the remainder of the excavation of the Ramses II statue, using newer and safer techniques, informed sources in the ministry said on Sunday.
This move comes following sharp criticism about the poor methods by which the head was extracted on Thursday; it was also left aside without proper precautions against residents in the area tampering with it.
Rumors that same day alleged that the use of heavy machinery and diggers in the site has led to the destruction of the statue, claims that the German-Egyptian mission have denied.
Mahmoud Afify, head of the Egyptian Antiquities Sector, said only the head of the statue was lifted with a crane due to its excessively heavy weight.
The eight-meter statue was found submerged in ground water in the Matariya area in Ain Shams district by a joint German-Egyptian archaeological mission operating in Matariya area. The statues were found at the location where King Ramses II is believed to have built his Temple, in a city called Oun in Ancient Egypt.
The discovery included parts from two statues of two kings, one of which is likely King Ramses II, belonging to the Nineteenth Dynasty.
Antiquities Minister Khaled al-Anany said the discovery is one of the most important ones made in recent archaeological digs; as it demonstrates the greatness of the temple in ancient times in terms of the magnitude of the building and the statues that were adorned by fine, precise patterns and inscriptions.
Tags
ain shams City of Oun German-Egyptian archaeological mission King Ramses King Ramses II King Ramses the Second Temple matariya ministry of antiquities

A celebration of museums: 100th anniversary of Tutankhamun’s tomb discovery 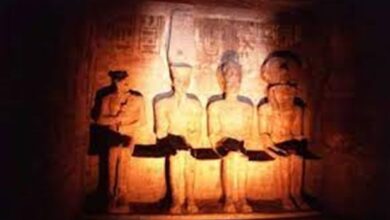