Egypt’s Secretary General of the Supreme Council of Antiquities Mostafa Waziri has headed to California of the United States to inaugurate the Sunken Archaeology Exhibition titled “Sunken Cities: The Enchanting World of Egypt”. The inauguration will happen October 5 in the Ronald Reagan Presidential Library.

The exhibition will display 293 artifacts until April 2020. The artifacts were recovered from the cities Heracleion and Canopus in the eastern port of Alexandria and the port of Abu Qir.

Among the most important artifacts are two huge statues of Isis and Serapis as well as statues of a Sphinx and some ornaments and household items.

The “Sunken Cities: Egypt’s Enchanted World” exhibition includes 293 pieces that tell the story of two of the most important ancient trade cities to sink under the Mediterranean following a destructive earthquake. After Heracleion and Canopus sank, the recovered artifacts were the last remaining pieces of those cities. Moreover, the exhibition includes some pieces previously on show in the Graeco-Roman Museum in Alexandria as well as the Alexandria Museum and the Egyptian Museum in Tahrir.

The exhibition first opened in 2015 at the Arab World Institute of France under the title “Osiris … the secrets of sunken Egypt”, and then moved to the British Museum in England. The first tour of the artifacts ended with an exhibition in Switzerland.

The exhibition is now seeing a second touring round, this time in the United States. The tour began in St. Louis, Missouri of United States and then moved Minneapolis, Minnesota and will now be shown in California.

ISIS acknowledges the death of its leader, announces his successor

Member of ‘ISIS Beatles’ given eight life sentences for role in hostage-taking, killing of Americans 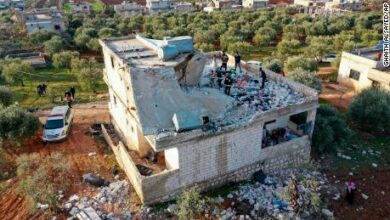 Death of ISIS chief raises more questions than it answers

Egypt denies the discovery of a new ‘Sphinx’ at the pyramids