President Abdel Fattah al-Sisi announced Sunday that Egypt is planning to establish a New Delta on the northwestern coast, over an area of one million feddans.

Sisi discussed the project during a Sunday meeting with Prime Minister Mostafa Madbouly, Minister of Agriculture and Land Reclamation al-Sayed al-Quseir, the Chairman of the Engineering Authority for the Armed Forces Major General Ehab al-Far, the Adviser to the President for Urban Planning Amir Sayed Ahmed, and Chief of the National Service Projects Organization (NSPO) Mostafa Amin. 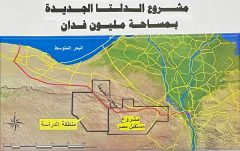 President Sisi was briefed on all details related to studies conducted by the concerned research teams from the Ministry of Agriculture, the National Service Projects Organization and academic bodies regarding the areas of land on the northwestern coast at the Dabaa axis.

These studies confirmed the readiness of these lands for agricultural reclamation as part of the giant New Delta national project which includes within it the “Mostaqbal Misr” (Future of Egypt) project for agricultural production.

Sisi ordered the immediate implementation of the New Delta project, merging all production stages together to keep the schedule focused.

This will help enhance the government’s strategy to establish new agricultural and urban communities characterized by modern administrative systems, which will encompass industrial complexes based on agricultural production and provide thousands of new jobs.

The meeting also reviewed infrastructure plans for the project and the equipment that the Engineering Authority will supervise including roads, services, drainage stations, electricity supplies and water paths to transport irrigation water.

The Presidential Spokesman Bassam Rady added that the Agriculture Minister presented a future goal for crops and agricultural commodities produced by Egypt, as well as the ministry’s efforts to reduce food gaps.

And the Director General of the National Service Projects Organization presented efforts with Agriculture Ministry to support agricultural development plans in all aspects, promote food security and animal production projects.

Sisi responds to critics of his interest in building bridges